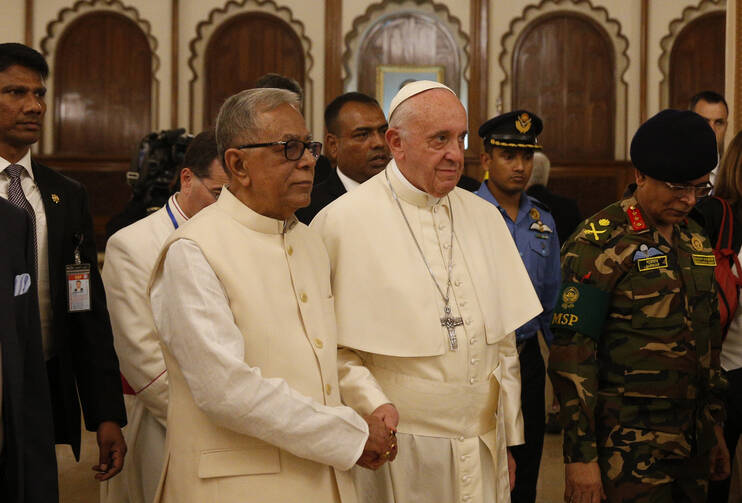 On his arrival in Dhaka, the capital of Bangladesh, Pope Francis appealed to the international community to “take decisive measures” to address “the grave crisis” of some 620,000 Rohingya refugees from Myanmar that this poor country has given refuge to in recent months.

Francis chose to move with prudence and opted not to use the “R” word. Instead, he described them as “a massive influx of refugees from Rakhine State.”

He called for urgent international action on two fronts. First, to offer “immediate material assistance to Bangladesh in its effort to respond effective to the urgent human needs [of the refugees]” and, second, “by working to resolve the political issues that have led to the mass displacement of people.”

Francis arrived here from Myanmar where the use of the word Rohingya, the minority Muslim population in Rakhine State, can end a dialogue, and so—perhaps to keep all doors open in the search for a solution to their dramatic situation—Francis also in Bangladesh chose to move with prudence and opted not to use the “R” word. Instead, he described them as “a massive influx of refugees from Rakhine State.”

He issued his appeal from the Presidential Palace on Nov. 30, in his first major speech in the capital city of this nation of 160 million people, when he addressed the government authorities, representatives of civil society, religious leaders and the diplomatic corps.

“It is imperative that the international community take decisive measures to address this grave crisis, not only by working to resolve the political issues that have led to the mass displacement of people but also by offering immediate material assistance to Bangladesh in its effort to respond effectively to urgent human needs,” the pope said.

He praised Bangladesh for “the spirit of generosity and solidarity”—a distinguishing mark of Bangladeshi society, he said—“that has been seen most vividly in its humanitarian outreach to a massive influx of refugees from Rakhine State, providing them with temporary shelter and the basic necessities of life.”

He underlined the fact that “this has been done at no little sacrifice. It has also been done before the eyes of the whole world.”

The plight of the Rohingya was also raised powerfully by Bangladesh’s president, Abdul Hamid, who spoke before the pope. He recalled that the government “gave shelter to one million Rohingyas who were forcefully displaced from their ancestral home in the Rakhine State of Myanmar. Thousands of them, including women and children, were brutally killed, thousands of women were violated. They saw their homes burnt into ashes.”

He recalled that “they had to take shelter in Bangladesh to escape the ruthless atrocities perpetrated by Myanmar army” and “our people welcomed them with open arms, sharing food, shelter and other basic needs” and “accepted the inconvenience of accommodating them in such a densely populated land.”

President Harmid praised Francis for the position he has taken “in favor of the distressed Rohingyas” and said, “your passionate voice against such brutality, gives hope for [the] resolution of the crisis.” He said the pope’s “closeness to them” and his “call for helping them” and his appeal “to ensure their full rights gives moral responsibility to the international community to act with promptness and sincerity.”

Pope Francis began his speech by thanking the president for his kind invitation and words of welcome, and recalling that he is the third pope to visit this city. Paul VI came her in 1970, during his visit to Pakistan, and John Paul spent time in Bangladesh in 1986. “I come here in the footsteps of two of my predecessors,” he said, “to pray with my Catholic brothers and sisters, and to offer them a message of affection and encouragement.” There are around half a million Christians (including 350,000 Catholics) in this country of 160 million people, 87 percent of whom are Muslim, 10 percent Hindu.

Francis noted that Bangladesh “is a young state” but, he said, “it has always had a special place in the heart of the Popes

Francis noted that Bangladesh “is a young state” but, he said, “it has always had a special place in the heart of the popes, who from the start have expressed solidarity with its people, sought to accompany them in overcoming initial adversities, and supported them in the demanding task of nation-building and development.” In fact, though he did not say so, the Vatican was one of the first states in the world to recognize Bangladesh, and—as the president mentioned—the Holy See opened a nunciature (embassy) in Dhaka in February 1973.

Francis recalled that Bangladesh “is a nation that strives to join unity of language and culture with respect for the different traditions and communities which enrich the great current of the political and social life of the country.” He emphasized that in today’s world “no single community, nation or state can survive and make progress in isolation. As members of the one human family, we need one another and are dependent on one another.”

He recalled that the founders of Bangladesh, and in particular the first President, Sheikh Mujibur Rahman (the father of the current prime minister, “understood and sought to embody this principle in the national Constitution” and “envisioned a modern, pluralistic and inclusive society in which every person and community could live in freedom, peace and security, with respect for the innate dignity and equal rights of all.”

Aware of the sometimes difficult political situation in the country due especially to the rise of Islamic fundamentalists, Francis declared that “the future of this young democracy and the health of its political life are essentially linked to fidelity to that founding vision. For only through sincere dialogue and respect for legitimate diversity can a people reconcile divisions, overcome unilateral perspectives, and recognize the validity of differing viewpoints.” Because, he said, “true dialogue looks to the future, builds unity in the service of the common good and is concerned for the needs of all citizens, especially the poor, the underprivileged and those who have no voice.”

Francis told his top-level audience at the palace and the millions who were following the ceremony nationwide on television that he was looking forward to his meeting with the country’s ecumenical and interreligious leaders tomorrow afternoon where “we will pray for peace and reaffirm our commitment to work for peace.”

In this context, Francis hailed “the harmony that has traditionally existed between followers of the various religions” in Bangladesh, which creates “an atmosphere of mutual respect, and a growing climate of interreligious dialogue” that enables believers “to express freely their deepest convictions about the meaning and purpose of life” and so “contribute to promoting the spiritual values that are the sure basis for a just and peaceful society.”

Pope Francis declared that “in a world where religion is often—scandalously—misused to foment division, such a witness to its reconciling and unifying power is all the more necessary.” He said this common witness was “particularly eloquent” in “the common reaction of indignation” after the July 2016 terrorist attack on the Holey Artisan Bakery in Dhaka, by five armed men linked to the ISIS, which led to the deaths of 29 people. Francis said the joint-response by the nation’s religious leaders sent “the clear message” that “the most holy name of God can never be invoked to justify hatred and violence against our fellow human beings.”

Francis concluded his speech by recalling that “Bangladesh’s Catholics, though relatively few in number, nonetheless seek to play a constructive role in the development of the country, particularly through their schools, clinics and dispensaries.”

He told the president and the other authorities of this country that “the church appreciates the freedom to practice her faith and to pursue her charitable works, which benefit the entire nation, not least by providing young people, who represent the future of society, with a quality education and a training in sound ethical and human values.”

He recalled that in its schools where “the vast majority of its students” and “many teachers” are non-Christian, “the church seeks to promote a culture of encounter that will enable students to take up their responsibilities in the life of society.” Then in a remark that seemed to reflect the church’s concern that an increasing Islamisation in the country could jeopardize this religious freedom, Pope Francis said, “I am confident that, in accordance with the letter and the spirit of the national Constitution, the Catholic community will continue to enjoy the freedom to carry out these good works as an expression of its commitment to the common good.”

We are privileged to be living in an era of discernment, dialogue, and action.