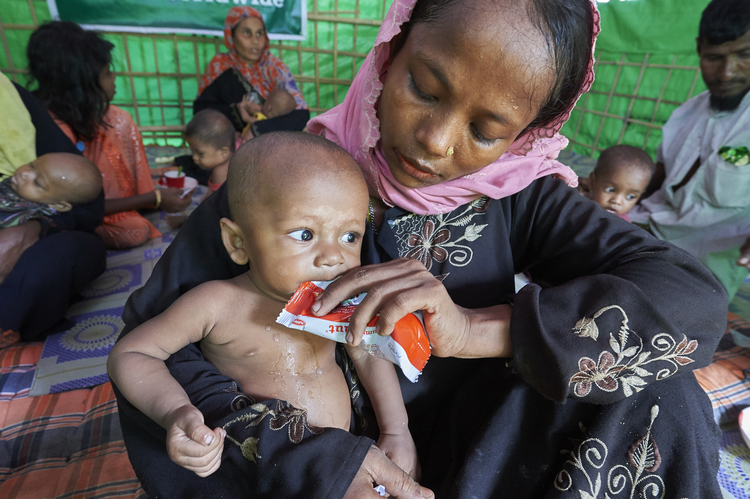 A woman from Myanmar feeds her child in a U.N. clinic for severely malnourished Rohingya children Oct. 28 in the Balukhali Refugee Camp near Cox's Bazar, Bangladesh. More than 600,000 Rohingya have fled government-sanctioned violence in Myanmar for safety in Bangladesh. (CNS photo/Paul Jeffrey)

In the heart of downtown Yangon sits the ancient Sule Pagoda, a shimmering gold stupa that, at least according to local lore, was first built during the time of the Buddha. Several blocks away is St. Mary’s Cathedral, a grand 120-year-old red brick church with gleaming twin spires that survived the WWII bombing of the outpost of empire then known as Rangoon.

The bustling streets of Myanmar’s commercial capital pay testament to the Buddhist-majority nation’s ethnic and religious diversity and the city’s storied past as a colonial-era trade hub: within a one kilometer radius of the Sule Pagoda one also can find Hindu, Jain and Chinese temples; Baptist, Methodist and Anglican churches; Sunni and Shia mosques, as well as a synagogue and an Armenian Orthodox church. But the scene of largely harmonious diversity on Yangon’s streets belies the story of apartheid and violence playing out in the country’s northwest.

In recent months, over 600,000 people have fled from northern Rakhine State into Bangladesh following a brutal military crackdown, a sustained and asymmetric response to attacks by Rohingya militants that began in late August.

Thousands of homes have been torched and countless villages razed. Refugees in Bangladesh have been treated for injuries that support their accounts of indiscriminate fire from security forces, and human rights groups have documented cases they say point to a campaign of systematic rape. The death toll of the violence can only be guessed at: Myanmar’s government has denied access to independent international investigators. Domestically, there is a popular view that the Rohingya Muslims have expansionist, secessionist designs on northern Rakhine State.

It is amid a mounting chorus of international condemnation and allegations of ethnic cleansing that Pope Francis makes his first visit to this troubled land.

Diplomatic relations were established between Myanmar and the Holy See following a meeting between Pope Francis and State Counsellor Daw Aung San Suu Kyi at the Vatican earlier this year. Devotees from around the country are making the pilgrimage to Yangon for the Pope’s visit. There’s even a Pope Francis in Myanmar 2017 Theme Song.

It is amid a mounting chorus of international condemnation and allegations of ethnic cleansing that Pope Francis makes his first visit to this troubled land.

Benedict Rogers, who specializes in Myanmar at the human rights organization Christian Solidarity Worldwide, is the author of three books on the country and became a Catholic in Myanmar in 2013—a story told in his book From Burma to Rome.

He says the pope’s visit is a landmark occasion.

“This is a truly historic visit—the first ever papal visit to Myanmar, coming not long after the appointment of Myanmar’s first-ever cardinal, Myanmar’s first ever beatification and the celebration of 500 years of Catholicism in Myanmar. For such a tiny Catholic population, this is a profoundly significant time.”

But, he notes, it is also a time of trial.

The pope’s visit is also significant “for the country as a whole, given the continuing religious and ethnic conflicts, tensions and indeed in some parts of the country what has been described as ethnic cleansing, crimes against humanity and even genocide. The pope will bring a message of peace, reconciliation, justice and human dignity, and I hope that message will be heard by the country as a whole.”

For Aung San Suu Kyi, the handling of the Rohingya issue is a delicate matter, and her perceived failure to take a principled stand has dealt a significant blow to her international standing.

The term Rohingya is viewed by many in Myanmar as a recent political construct. They are broadly referred to as “Bengalis,” a term that denotes a widely-held belief they are illegal immigrants (or descendants thereof) from Bangladesh.

As such, she has avoided both the terms Rohingya and Bengali, believing them to be inflammatory and not conducive to solving the problems that persist in the restive and impoverished Rakhine State. She has navigated this territory by referring to them as the Muslims in Rakhine State or Rakhine Muslims. She formed a commission with former U.N. chief Kofi Annan at the helm to formulate a plan for bringing Rakhine State back from the brink.

Cardinal Charles Bo of Yangon, the leader of the Catholic Church in Myanmar, has referred to the plight of the Rohingya as “an appalling scar on the conscience of my nation.” He has also requested that the pope refrain from using the term Rohingya on this trip.

“I'm in a prison here, in the camp. So I don’t care [if he uses] Muslim or Rohingya. I would like to say, during his visit in Myanmar, to please talk about us.”

Cardinal Bo has been a staunch defender of the right to citizenship for the Rohingya minority and spoken of the need for an end to hatred, violence and persecution in Myanmar. In addresses to the United Nations and the U.K. Parliament, he called for an independent, international investigation of the violence in Rakhine.

In 2016, he described the Rohingya as “the most marginalized, dehumanized and persecuted people in the world.”

“They are treated worse than animals. Stripped of their citizenship, rejected by neighboring countries, they are rendered stateless. No human being deserves to be treated this way. Without [a solution], the prospects for genuine peace and true freedom for my country will be denied, for no-one can sleep easy at night knowing how one particular people group are dying simply due to their race and religion,” read a release from the cardinal’s office at the time.

Nuhr Abdul is a young Rohingya man who, since 2012, has been confined to the sprawling internment camps outside the Rakhine State capital of Sittwe. Asked what he would say to the pope if they had a chance to speak, there is a pause on the phone line as he considers his response.

“I would like to say to the pope: ‘You are a great person. You are a respected man, respected by everybody. I personally respect you. From you, we ask for peace.’

“Being a Muslim in Myanmar is a big crime,” he said. “Every religion talks about peace. We also, as Muslims, we want peace. The leaders are not listening to us, even though we are looking for peace.

“The government of Myanmar is not recognizing our citizenship…but as citizens of the world, do we not deserve rights? Our freedom of worship, our freedom of movement? Mosques have been closed; they have been set on fire. The government is making our generation less educated [through denial of schooling].”

As for the matter of whether or not the pope opts to use the term Rohingya during his visit, Mr. Abdul said he does not mind either way—he is more concerned with whether or not anyone will distribute blankets to the nation’s internally displaced people and warm clothes for the children as the winter has begun to set in.

“It’s not a problem for me—I'm in a prison here, in the camp. So I don’t care [if he uses] Muslim or Rohingya. I would like to say, during his visit in Myanmar, to please talk about us.”

Kayleigh Long is a contributor to America, writing from Southeast Asia.