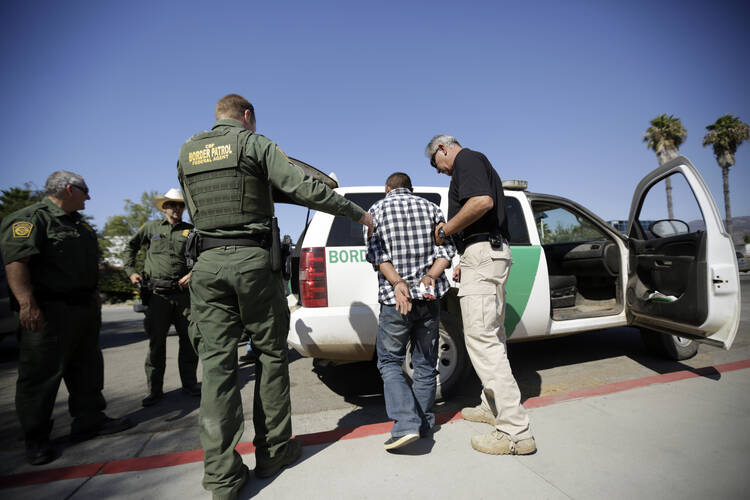 A man is detained by Border Patrol officials after breaching border fencing separating San Diego from Tijuana, Mexico, Tuesday, Sept. 26, 2017, in San Diego. The man, who said he was from Chiapas, Mexico, was detained by agents as they prepared for a news conference to announce that contractors have begun building eight prototypes of President Donald Trump's proposed border wall with Mexico. (AP Photo/Gregory Bull)

Last week’s Border Patrol detention of Rosa Maria Hernandez, a 10-year-old girl with cerebral palsy intercepted on her way to a hospital, drew national media attention, but it did not represent a unique experience for families on the border. For them, the security checkpoints that led to Rosa Maria’s detention are part of everyday life.

On Oct. 31, the American Civil Liberties Union filed a lawsuit for Rosa Maria’s immediate release. She had been stopped en route to Driscoll Children’s Hospital on Oct. 24. Border Patrol officers followed her and detained her after surgery.

Separated from her family, she has been recovering in a San Antonio detention center and faces deportation to a nation she left as a 3-month-old infant. Her mother is also undocumented and has been unable to visit her at the shelter. As her case drags on, it could be months before Rosa Maria, who is reported to have the cognitive development of a 6-year-old, will be able to see her family.

“What you’re seeing with these checkpoints is not about national security. It’s about terrorizing immigrant communities.”

Detentions at checkpoints are common, according to Edith Cedillo, who works with immigrant families through Catholic Charities in Laredo, where Rosa Maria and her family live. “A lot of the people are scared to come out to tell their story of what happens to them,” she says.

“In this case with Rosita, her mother voiced her concern and that’s how the story was able to get out,” Ms. Cedillo says. Undocumented immigrants who live in Laredo but need surgery in San Antonio “are basically turning themselves in” when they pass through a checkpoint, she says.

The same is true in border cities like El Paso, Tex., and Las Cruces, N.M., according to Dylan Corbett, director of the Hope Border Institute. The Las Cruces Diocese celebrates a eucharistic congress each year that takes place in two locations—one on each side of a security checkpoint.

“It interferes with the church reality,” Mr. Corbett says. “What you’re seeing with these checkpoints is not about national security. It’s about terrorizing immigrant communities.”

To lower the impact of a possible deportation, mothers will go to one Mass, fathers to another, dividing the family.

Mr. Corbett shares the story of a young woman who recently graduated from a Texas university. Her older brother, undocumented and afraid to try to pass through checkpoints, was unable to attend her graduation. Aunts and uncles, unable to visit newborn nieces and nephews, are left to interact with family celebrations via smartphone screens.

Border Patrol security measures may also be harming hurricane recovery efforts. On Nov. 1, the Texas Association of Builders told state senators that there were too few workers to rebuild Houston after Harvey, the Houston Chronicle reported. The association blamed the broken immigration system for the lack of labor.

“Immigrants in Texas feel a great deal of fear related to the enforcement of security law,” says Jennifer Carr Allmon, executive director of the Texas Catholic Conference. She adds that some undocumented immigrant families in Houston were afraid to ask for help after the hurricane.

To lower the impact of a possible deportation, mothers will go to one Mass, fathers to another, dividing the family. “If both mom and dad are deported, the kids will end up in foster care,” she says. “Most of our immigrant families are just uncertain about what is a safe activity and what is not.”

“Most of our immigrant families are just uncertain about what is a safe activity and what is not.”

Ms. Allmon notes “the fear and anxiety” Rosa Maria’s mother “must have felt, putting her child in an ambulance and not being able to accompany her daughter. She tried to make the best decision for her family, and now her daughter is detained.”

While U.S. bishops acknowledge the right of a nation to control its borders, Ms. Allmon says security “needs to be targeted, humane and proportional.”

In many towns and cities along the divide with Mexico, a reality that defies checkpoints and border enforcement persists. Despite talk in Washington of higher walls, “it’s one community,” Ms. Allmon explains. “The family and business relationships are on both sides of the border.”

“But we have to do border enforcement in a way that recognizes the human family,” she says. “It should truly target the criminal element among immigrants that cause harm but respect an immigrant’s right to migrate and protect their family.”

Ms. Cedillo of Catholic Charities says the immigrant community she works with wants the broken U.S. immigration system to be fixed.

“We’re hopeful for an immigration reform. With this new administration, it’s kind of hard,” she says. “But we pray. We pray for President Trump. We pray for Congress, for them to make a reform. We’re praying for the DACA kids as well.”

U.S. Customs and Border Protection did not respond to requests for comment.

The USA Bishops are good at expressing sentiment in the face of evils, this example probably being of the sort the extremity of which exceeds any reason, decency, civility, compassion, and a hundred other virtues. Instead of sentiment in this situation I’d like to hear a good old-fashioned Bishops’ condemnation of anyone – Catholic or otherwise – who approved of and participated in this detention.

I am reminded of the following episode, of a Catholic who committed grievous and outrageous ills upon others, and how he was eventually condemned, but not by USA Bishops:
“As an amazed television audience looked on, Welch responded with the immortal lines that ultimately ended McCarthy's career: "Until this moment, Senator, I think I never really gauged your cruelty or your recklessness." When McCarthy tried to continue his attack, Welch angrily interrupted, "Let us not assassinate this lad further, senator. You have done enough. Have you no sense of decency?"

One could substitute quite a few contemporary names in that excerpt of the McCarthy hearings!

At the least, a condemnation from the Bishops for a detained 10 year old undocumented girl with cerebral palsy. God forgive all of us!