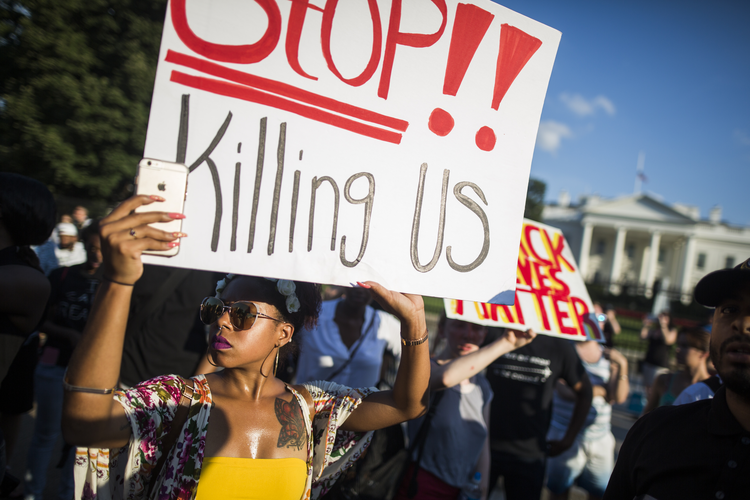 People demonstrate outside the White House in Washington on July 8, 2016 against the nationwide police shootings of African- Americans (CNS photo/Jim Lo Scalzo, EPA).

Cardinal Donald Wuerl issued a new pastoral letter on Wednesday, condemning “the persistent evil of racism” and writing that “the divisive force of this sin continues to be felt across our land and in our society” and remains an obstacle to “the harmony to which we are called as a human family.”

“The mission of reconciliation takes on fresh emphasis today as racism continues to manifest itself in our country, requiring us to strengthen our efforts,” the Washington, D.C., archbishop wrote, citing “incidents both national and closer to home that call attention to the continuing racial tensions in our society.”

The letter, entitled “The Challenge of Racism Today,” is among the most high-profile responses from a Catholic leader to the continued racial unrest affecting the United States. Earlier this summer, a group of right-wing protesters and white supremacists marched in Charlottesville, Virginia, clashing with police and counter-protesters. One person died in the violence. But that was just the latest in a years-long string of race-related violence, which has included a rash of deaths of unarmed African-American man at the hands of white police officers. Earlier this summer, a priest from Virginia even acknowledged that he had been a member of the Ku Klux Klan before he was ordained.

In response to some of those events, the U.S. Conference of Catholic Bishops is drafting a new pastoral letter on racism. In August, bishops launched a new ad hoc committee that will consider issues of race, which will be headed by George V. Murry, S.J., the bishop of Youngstown, Ohio, one of a handful of African-American bishops in the United States.

In an interview with America, Cardinal Wuerl said he wrote the letter, in part, as a response to concerns he heard from some Catholics in the archdiocese, including African Americans and Hispanics, that there still exists “subtle racism” and sometimes a "not so subtle" racism in the nation.

He said that he expects “something far more significant” when U.S. bishops publish their collective pastoral letter on race sometime next year, but he said the point of his letter is that everybody must do something to combat the sin of racism.

“We’re asking everybody in this archdiocese to take some responsibility for any marginalization that you see of anybody. Take some personal responsibility for that,” he said. “The only way we could really do that was to step forward ourselves, rather than say, ‘We don’t have to worry about this, somebody else will take care of it.’”

He said the letter is intended to offer spiritual and pastoral guidance and is not meant to be political.

“This is a pastoral letter, an effort to bring spiritual guidance. This is not a response to political issues, not to give some direction politically,” he said. “We have a pastoral problem and there’s a spiritual solution to it.”

In his letter, Cardinal Wuerl writes that Catholics must first admit that racism exists “in a variety of forms” and then agree that there are steps everyone can take to help stop it. He said racism is contrary to God’s plan for humanity.

“The divisions we face today that are based on the color of one’s skin or ethnic background are obviously not a part of God’s plan,” he wrote.

Further, “intolerance of other people because of their race, religion or national origin is ultimately a denial of human dignity. No one is better than another person because of the color of their skin or the place of their birth.”

The cardinal said that racism has affected many groups in the United States, but, he wrote, African Americans have especially been hurt by the lingering effects of “the sin of centuries of human trafficking, enslavement [and] segregation.”

To fight racism, drafting “politically correct statements” is not enough, he wrote, and instead individuals must consider how to “move towards a Church and society where the wounds of racism are healed.”

Racism offends God, he wrote, and it is a “sin against our neighbor, particularly when it is manifested in support of systemic social, economic and political structures of sin.”

Individuals must consider how racism affects their own communities and not assume that it is inevitable.

“We also must be alert to addressing racism wherever we meet it in our communities,” he wrote, noting that people must acknowledge how racism infiltrates housing, the workplace, public education and the criminal justice system.

When it comes to Catholic parishes, he said, Sunday Masses present an opportunity to challenge racism, offering several examples.

“The prayers of the faithful can promote social justice and urge the elimination of racism,” he wrote. “Homilies can deal with the implications of the Christian faith for prejudice and racist behavior. Parishes can provide opportunities and catechetical material for adults to begin a dialogue about how to address the issues raised here. Parish efforts at evangelization ought to welcome and reach out to people of every race, culture and nationality.”

“The elimination of racism may seem too great a task for any one of us or even for the whole Church,” the cardinal writes. “Yet we place our confidence in the Lord.”

“On the journey to that ‘new heaven and new earth,’” he concludes, “we make our way with faith in God’s grace, with hope in our own determination, and above all with love for each other as children of God.”

This article has been updated with an interview with Cardinal Wuerl.

Cardinal Donald Wuerl issued a new pastoral letter on Wednesday, condemning “the persistent evil of racism” and writing that “the divisive force of this sin continues to be felt across our land and in our society

Is this true? Yes there is racism. There always has been bigotry towards specific groups since the beginning of time. Is it any more prevalent today in the United States than at any previous time or in any other place in the world?

Or is there just a race industry that continually says that racism is a major problem but cannot have it get better or else they will be out of a reason for being? Is that what many are reacting to?

I am in no way minimizing the hurdles that many in the United States must get over to lead a meaningful life. But are these hurdles due to racism? I have not seen anyone make a case that this is so. Various people just assert that racism is a problem. Maybe a discussion should be had on the causes of these hurdles and if it is due to racism.

It is true. Racism is an attack, any attack, against the fundamental unity of the human family. When the Culture of Death began to sink its claws in our social fabric, racism began to rear its ugly head, even though we did not think of abortion, euthanasia, and assisted suicide in those terms. One only has to look at statistics about abortion, and look at the way Institutionalized abortion has directed itself to minority communities in order to draw a connection between Institutionalized Abortion and Racism. Today's racists have become more sophisticated, they speak of ethno-centrism, they speak of economic nationalism, but they continue to argue for writing people off. The Eugenicists developed a complex doctrine about who was inferior and unfit for reproductive rights, but their underlying ideology remained the same as their more brutish predecessors. What are we to say about the fact that we eliminate systematically the unborn diagnosed with Down Syndrome? What distinguishes this from a form of scientific racism? If you have a better word to describe the thing, let me know. But the thing is terrifying enough. I applaud Cardinal Wuerl very much for taking a stand on this issue. The fact is that we have institutionalized legal protections against racism, we have seemingly not gone to the root of the problem. "All men are created equal" said Lincoln at Gettysburg. Do we still believe in that? I am concerned about Catholics who profess to be pro-life, and yet are remarkably quiet not only about the resurfacing of openly racist rhetoric, but who are silent about policies that are effectively racist; like our prohibiting immigrants from certain countries, like our disconcern about the victims of war crimes that our nation may be committing or contemplating, in poor impoverished countries throughout the world; like our practices with regard to policing and incarceration. All of this speaks against our adherence to the proposition on which according to Lincoln, our nation was founded; and against our adherence to the most basic ethical principles of the Christian faith. I work as a Parish priest with indigenous Maya people in Quintan Roo, and I am witness every day to the deeply humiliating, deeply institutionalized effects of racist ideologies and modes of thought with long histories which by no means have been resolved. There are signs of hope, yes.

Removed because it repeated the comment I had made.

Ellen B
2 years 2 months ago

"Are these hurdles due to racism? I have not seen anyone make a case that this is so." I would suggest that you review court cases, easily accessible through a web search for individuals who were victims of racial bias. It's disingenuous of you to imply that there are not hurdles that are due to race or that you personally have never seen any of those hurdles or biases in action. I've personally never had a gun drawn on me at a traffic stop, thanks to cameras in cell phones, I've seen ample evidence that it is taking place. I can look at statistics & see that groups are underrepresented in levels of authority throughout society. Whatever reason you have for feeling defensive, don't let it lead you to minimize injustice in society.

The problem is poverty.

Do something about un-relenting poverty.

But what causes poverty?

No one wants to address that. It is not police brutality or racism due to discrimination but another form of racism that most do not want to talk about. It would be too uncomfortable for liberals to do so.

There is a four step process that avoids poverty for most when raising children. In order:

4. have a child only after getting married and having a job.

If this is followed then poverty is avoided for most. Of course if one decides not to do steps 3 and 4 and do not get married or have a child then there is a greater chance of not ending up in poverty. But the key thing is to get an education and a job and get married before having a child.

Human beings are made in the image and likeness of the divine - declare Holy Scriptures.

This article also appeared in print, under the headline “Cardinal Wuerl begins spiritual campaign against 'persistent evil of racism',” in the November 27, 2017, issue.