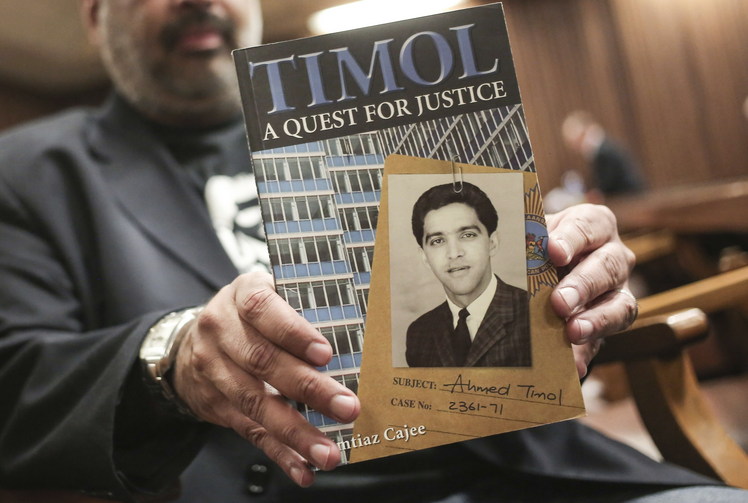 Imtiaz Cajee, nephew of Ahmed Timol, poses with his book about the activist on Aug. 24 in the North Gauteng High Court in Pretoria, South Africa. (AP Photo, File)

Oct. 27, 1971: Political activist Ahmed Timol plunges to his death from the 10th floor of John Vorster Square (now the Johannesburg Central Police Station). The Security Police, who had detained him without trial as a suspected terrorist, claim that he committed suicide. As pressure from community organizations, opposition political parties and the religious community mounts, the state conducts an inquest into his death. But the magistrate in charge reaffirms the claim of the police: death by suicide.

Ahmed Timol, born in what was then eastern Transvaal Province (now Mpumalanga Province) in 1941, was a Muslim schoolteacher of Indian heritage. Active in liberation politics from his student days, he left South Africa in 1966, ostensibly to make the Hajj, or pilgrimage to Mecca. In fact, he traveled from Saudi Arabia to Britain in early 1967, where he joined the African National Congress and South African Communist Party in exile. He received training in guerrilla warfare and political organizing in various countries, including what was then the Soviet Union, before returning to South Africa in 1970.

He was involved in underground political work when he was arrested by the police on Oct. 22, 1971.

Few really believed the findings of the 1972 inquest. Too many activists—political activists as well as guerrillas, from every major opposition movement—had died by that point, with too many convenient suicides and “accidents.” In some cases, such as the 1982 death of trade unionist Neil Aggett, there may have been “assisted” suicides, caused by torture and the threat of more torture. The poet Chris van Wyk summed up these deaths with cynical brilliance in his poem “In Detention,” revealing a vicious security state operating beneath the veneer of the rule of law.

Too many activists had died by that point, with too many convenient suicides and “accidents.”

On Oct. 12 of this year, in the North Gauteng High Court in Pretoria, Judge Billy Mothle, presiding at a reopened inquest into Timol’s death, ruled that the activist was in fact murdered by the Security Police. Though the immediate cause of death was the fall, new forensic examinations revealed that Timol had been tortured—a standard procedure at the time, former activists who testified during the inquiry revealed—and that it was unlikely he could have consciously thrown himself out of the window.

Two of Timol’s interrogators, Captains Johannes Van Niekerk and Johannes Gloy, had a record of accusations of torture before his death. They were never prosecuted for their actions and did not testify before the Truth and Reconciliation Commission in the 1990s, set up to investigate atrocities by all sides during the anti-apartheid struggle. Both are dead now. But a police clerk connected to the Timol case, Joao Rodrigues, is still alive; he testified during the new inquest and stuck to the official story.

It is likely that he and others associated with Timol’s death will be charged with murder or at least complicity. The ruling from the new inquest also opens up the possibility of further investigations into possible political murders that the Truth Commission failed to address. Apart from notorious questions like who actually inflicted the injuries that killed Steve Biko in 1977, and who actually ordered the death of radical academic Rick Turner in 1978, there are hundreds of deaths unaccounted for, and dozens of killers who never admitted their actions to the Truth Commission.

It should be noted that the Truth Commission gave immunity only to perpetrators of atrocity who came forward to admit their actions and also made full disclosure, including naming their bosses and accomplices. There is a growing feeling in South Africa that the Truth Commission failed to do justice to victims, with some suggesting that South Africa needs its own Nuremberg Trials to deal with the past.

There is also a risk in this approach. Unscrupulous actors—particularly those engaged in corruption and their own criminal public activities—could exploit the concerns of families whose loved ones suffered and died in the past, using promises of justice as a smokescreen. It is too easy to keep the public diverted by tragedy.