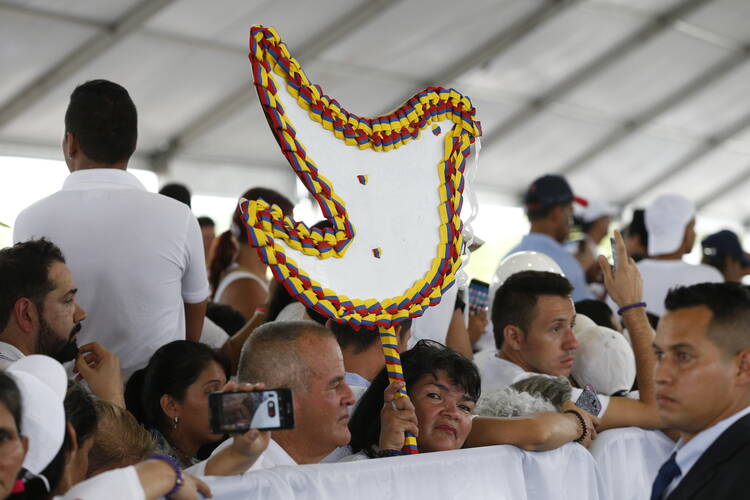 Pope Francis is in Colombia from Sept. 6-11 and America is covering the events on the ground. For coverage of yesterday's events, click here.

On 'sacred ground' of suffering, pope prays for reconciliation

In a raw, honest prayer service where victims and perpetrators of violence stood under the gaze of a bomb-damaged crucifix, Pope Francis urged Colombians to summon the courage to make peace.

Symbolically presiding over the event Sept. 8 was what remained of a crucifix from the church in Bojaya, an image of Jesus whose arms and legs were blown off in 2002 when an improvised homemade mortar launched by rebels crashed through the roof of a church and exploded.

Referring at the service to the bombing that tore the arms and legs from the Christ of Bojaya, Pope Francis said, "They have torn away your children who sought refuge in you."

But he did not stop there. He prayed that Christ would help "us to commit ourselves to restoring your body."

"May we be your feet that go forth to encounter our brothers and sisters in need; your arms to embrace those who have lost their dignity; your hands to bless and console those who weep alone," Pope Francis prayed.

"Christ broken and without limbs is for us 'even more Christ,'" the pope said, "because he shows us once more that he came to suffer for his people and with his people."

Four people gave their testimony at the encounter: Deisy Sanchez Rey, who fought in a paramilitary group for three years before she was arrested and imprisoned for two years; Juan Carlos Murcia Perdomo, a FARC fighter for 12 years; Pastora Mira Garcia, whose two small children were killed by the paramilitary militias; and Luz Dary Landazury, who was wounded in 2012 by a bomb blast.

Pope Francis responded directly to each of them, paying tribute to their honesty, their pain and their efforts to start a new life by forgiving and asking forgiveness.

"It can be difficult to believe that change is possible for those who appealed to a ruthless violence in order to promote their own agenda, protect their illegal affairs so they could gain wealth, or claim—dishonestly—that they were defending the lives of their brothers and sisters," the pope said.

But truth, forgiveness and reconciliation are the only ways to break the cycle of violence that caused so much suffering, he said. "Fear neither the truth nor justice."

En route back to the airport, Pope Francis was to visit the Cross of Reconciliation at Los Fundadores Park. The cross was carried in a Via Crucis service throughout the region in 2012 before being placed in the park. The plaque lists the number of local people kidnapped, murdered or who died from injuries caused by landmines from 1964 to 2016.

In the city of Villavicencio on Sept. 8, Pope Francis is scheduled to participate in an extraordinary prayer service for national reconciliation, attended by 6,000 persons, including victims from both sides of the violence, ex-guerillas, police and military officers.

It is the high point of a day that focused on the path to reconciliation in a country that has suffered since 1964 from an armed conflict between Marxist guerilla movements and the government, and from violence even before then.

The prayer service, heightened by the testimonies of four victims of the violence, will be transmitted nationwide by television, radio and social media. It is a central event in Pope Francis’ ongoing effort to bring about a cultural shift in this country, seeking to move minds and hearts away from violence to a path of peace and reconciliation.

Pope Francis is seeking to bypass the longstanding impasse created by the political polarization in the country, making clear that there is “another way” to build a future of peace where Colombians can see each other as “brothers and sisters,” not as enemies to be eliminated.

A booklet prepared by the archdiocese of Villavicencio includes a report of the tragic toll that the armed conflict has taken in this country over the past half-century: eight million victims, 984,507 homicides, 166,407 persons disappeared, 16,340 assassinations, 1,982 massacres, 19,684 victims of sexual violence, 6,421 cases of sexual violence, 6,421 cases of forced recruitment and 12,000 amputations.

In Villavicencio, Pope Francis outlines “the paths to reconciliation”

“Every effort at peace without a sincere commitment to reconciliation is destined to fail,” Pope Francis told 600,000 Colombians at a Mass on a military airstrip in Villavicencio, a city whose origins date to 1740, when the Jesuits came here to evangelize the local Guayupe tribe.

Francis is the first pope to visit this city of a half-million residents, which was caught up in the armed conflict between the government and the Revolutionary Armed Forces of Colombia, or FARC, for decades. He came to celebrate a day of reconciliation for the nation, and during the Mass he beatified two martyrs—a bishop and a priest—who symbolized Colombia’s reconciliation.

The nation remains politically polarized. There is much anger, hate and resentment in many people’s hearts, along with the temptation of vengeance in a country that already has seen so much death and destruction. The pope is aware of this and explained to the Colombian people “the true paths to reconciliation.”

First, he said, “reconciliation means opening a door to every person who has experienced the tragic reality of conflict.” He emphasized that “when victims overcome the understandable temptation to vengeance, they become the most credible protagonists for the process of building peace.” At a prayer service in the afternoon, two such victims were scheduled to speak.

Pope Francis: “when victims overcome the understandable temptation to vengeance, they become the most credible protagonists for the process of building peace.”

In his much applauded homily, Pope Francis said that “what is needed” for reconciliation “is for some to courageously take the first step in that direction, without waiting for others to do so.”

Addressing the nation of 49 million people, most of whom are Catholic, the pope said, “We need only one good person to have hope! And each of us can be that person!”

At the beginning of the Mass he beatified two such examples: a local bishop, Jesús Emilio Jaramillo Monsalve, and a priest, Pedro María Ramírez Ramos. The bishop, a member of the Xaverian missionary order, was a strong defender of human rights and the poor; he denounced the violence in his country and, for this reason, was assassinated by the Marxist guerrilla movement in 1989. Father Ramos was killed at the start of the Colombian civil war in 1948. When Francis declared them blessed, officially recognizing them as modern Christian martyrs, the crowd broke into loud applause; their beatification was a vindication for their Christian lives and for their witness to reconciliation.

“We need only one good person to have hope! And each of us can be that person!”

The pope also said that the path to reconciliation “does not mean ignoring or hiding differences and conflicts,” nor does it mean “to legitimize personal and structural injustices,” adding, “recourse to reconciliation cannot merely serve to accommodate unjust situations.”

He recalled here what St. John Paul II said about reconciliation in his letter to the bishops of El Salvador in 1982, when he wrote: “Reconciliation is a meeting between brothers who are disposed to overcome the temptation to egoism and to renounce the attempts of pseudo-justice. It is the fruit of sentiments that are strong, noble and generous that lead to establishing a coexistence based on respect for each individual and on the values that are proper to each civil society.”

Francis told the Colombians that reconciliation “becomes substantive and is consolidated by the contribution of all; it enables us to build the future, and makes hope grow.” He emphasized that “every effort at peace without a sincere commitment to reconciliation is destined to fail.”

The Gospel read at Mass today recalled the genealogy of Jesus, including a pagan, and the pope reminded the crowd that they too “are God’s people” and also have genealogies “full of stories, many of love and light; others of disagreement, insults, even of death.” These are stories of grief and exile, the pope said, and they also tell of the “many women [who], in silence, have persevered alone” and of the “many good men who have tried to put aside spite and resentment, hoping to bring together justice and kindness.”

In the face of these tragic personal histories, Francis asked, “How to best allow the light in? What are the true paths of reconciliation?” He said the Blessed Virgin Mary, whose feast is celebrated today, Joseph her husband and Jesus show the paths to reconciliation, and that all Colombians can follow them on these paths. Francis said Colombians can emulate Mary by “saying yes to the whole of history, not just to a part of it,” Joseph by “putting aside our passions and pride,” and Jesus Christ by “taking hold of that history, assuming it, embracing it.” He asked the crowd to “say yes to truth, to goodness, to reconciliation” and to “fill our history of sin, violence and rejection with the light of the Gospel.”

He also highlighted the role that women like Mary can play in this quest for reconciliation, even if they live in communities that “are still weighed down with patriarchal and chauvinistic communities.”

Pope Francis concluded his homily by saying, “it is up to us to say yes to reconciliation.” He added, “may our yes also include the natural environment.” He also reminded his audience that just as God “promised to our fathers, he helps all nations and peoples. He helps Colombia, which today wishes to be reconciled.” When he finished speaking, the crowd applauded warmly.

At the end of the Mass, Francis called for prayers for all those who are suffering as a result of the earthquake in Mexico.

Ahead of Pope Francis’ Mass in Villavicencio and his homily urging reconciliation in Colombia, the former commander of the Revolutionary Armed Forces of Colombia, or FARC, published a public letter in which he asked the pope for forgiveness.

“Your frequent reminders about the infinite mercy of God move me to beg for your forgiveness for any tears or pain we’ve caused Colombian society or any of its individuals,” wrote Rodrigo Londoño, better known by his nom de guerre Timochenko.

The longtime rebel commander, who is undergoing medical treatment in Cuba following a stroke, said he regretted that he was unable to be present for Francis’ visit. Declaring himself a “devout admirer” of the first Latin American pope, he praised Francis’ insistence on the dignity of every human being and outspoken criticism of an economic system in which rich nations loot the riches of poorer ones.