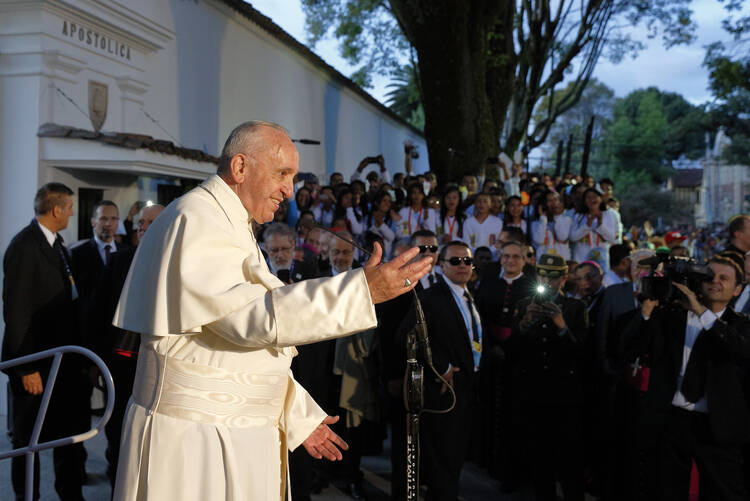 After welcoming Pope Francis to Colombia, President Juan Manuel Santos took the unexpected step of coming with his wife to greet the international media traveling with the pope and greeting each of them before giving a brief address of welcome.

He praised the pope for coming to this country at “this moment of utmost importance for the peace process.” He recalled that Francis, who he had met four times before this visit, has supported and encouraged the peace process from the beginning and “in the moments of greatest difficulty he encouraged us to persevere.” And now, “at this opportune moment,” he has come “to help us to take the first step to peace, reconciliation and to build a new Colombia for all its people.”

President Santos said the peace accords signed with FARC also include an “agreement regarding the victims of the conflict,” which he underlined was very important. He said that during his visit, Pope Francis will meet with some of the victims, and already tonight a child who was born during the conflict but can now look to a future of peace, gave the pope a dove of peace.

Faithful, political and civil leaders great Pope Francis as he arrives in Colombia

Pope Francis has arrived in Colombia. The airplane that brought him from Rome touched down at the military airbase of Bogota’s El Dorado international airport at 4 p.m. local time, on schedule. President Juan Manuel Santos and his wife welcomed him immediately as he stepped onto Colombian soil, and two children wearing traditional dress offered him a bouquet of flowers.

Out of the 48 million people in the country, the majority of which are Catholic, a thousand Colombian faithful were allowed to come to the airport for his arrival. They cheered enthusiastically and waved Vatican and Colombian flags when they saw him emerge from the door of the plane. A group of political and civil leaders and several of the country’s bishops, including Cardinal Rubén Salazar Gómez and the nuncio Archbishop Ettore Balestrero, were also on the tarmac to greet him.

The president led the pope to the podium for the brief ceremonial welcome, which included honoring the flags of the Vatican and Colombia, and the presentation of the respective delegations, the Vatican one being led by Cardinal Pietro Parolin, the Vatican’s Secretary of State, who came here last September for the signing of the peace accords between the government and the FARC guerrilla movement that ended 52 years of war.

Immediately afterwards, the president accompanied the pope to watch a spectacular colorful performance given by the Cumbia dancers to the enchanting sounds of traditional Colombian folklore music. Following the performance, Francis went to greet several people in wheelchairs and spent time with them.

The president then accompanied Francis to the popemobile, on which he rode side by side with Bogota’s Cardinal Salazar on the nine mile route from the airport to the city. Francis was cheered on by an estimated 700,000 people who had waited many hours to welcome this “messenger of peace and reconciliation” to a deeply polarized nation. Over the past 52 years, Colombia’s war has left 260,000 dead, 60,000 unaccounted for and 7 million displaced.

On the eve of Francis’ arrival, the leader of the political opposition to the peace accords, former-president Ǻlvaro Uribe, struck a distinctly sour and dissident note by writing a letter to the pope denouncing the spread of violence and drugs under the government of his political rival and now, apparently, his enemy, President Santos.

Pope Francis sought to get the two political rivals to overcome their differences and work instead for the good of the nation by inviting them to the Vatican for a private 40-minute meeting on Dec. 16 last year, but their relations since then and Mr. Uribe’s protest letter, which was made public today, showed clearly that his effort at mediation has not worked so far. Mr. Uribe went further by announcing that he would not be present when Pope Francis addresses the country’s political and civil leaders at his first major event in Bogota tomorrow morning.

During his five-day stay, Pope Francis will reside at the nunciature. He will spend the first full day (Sept. 7) in Bogota, the capital and largest city in Colombia, with over 8 million inhabitants from all over the country, as well as countless thousands of Venezuelans who have been forced to come here to work to help their stricken families back home.

As is now a tradition, 30 minutes after taking off from Rome, on route to Colombia, Pope Francis came to the rear of the plane to greet the 73 journalists, television crews and photographers that are accompanying him on his 20th foreign trip since becoming pope and his fifth to Latin America.

He began by thanking the media “for your company and for the work you will do on this trip,” which he said, “is special because it is a visit to help Colombia to continue forward on the path of peace, and I ask you to pray for this during the journey.”

“This trip is special because it is a visit to help Colombia to continue forward on the path of peace.”

He then reminded the media that “this plane we will fly over Venezuela,” and here, too, he asked them to “pray that it can dialogue, a dialogue with everyone, so that the country can have good stability.”

Francis made no reference to the fact that his flight path to Bogota, the capital of Colombia, had to be changed because of Hurricane Irma, the worst Atlantic hurricane in recorded history, and would now fly over the Barbados, Grenada and Trinidad and Tobago. The flying time from Rome to Bogota is 12 hours 30 minutes.

As usual, the pope greeted each member of the press individually. Some gave him gifts, like María Antonieta Collins from Univision in Florida, who presented him with four films from the 1950s of Cantinflas, Mexico’s equivalent of Charlie Chaplin, whom it is known the pope enjoyed in his earlier life. He received this gift with a broad smile and remarked how these great works of art are “healthy humor, that makes one laugh without dropping the tone.”

After so many foreign trips, Pope Francis now knows most of the media traveling on the plane with him and many of their personal stories. The pope has a smile for everyone, offers words of encouragement to some and often cracks jokes. Reporters do not hesitate to ask him to pray for them or for their family members or friends who are in difficulty, and he always promises to do so. Sometimes, if they have asked him this on a previous flight then, Francis wants an update on their condition.

Pope Francis, as is his wont, also greeted each member of the crew and staff on the plane.