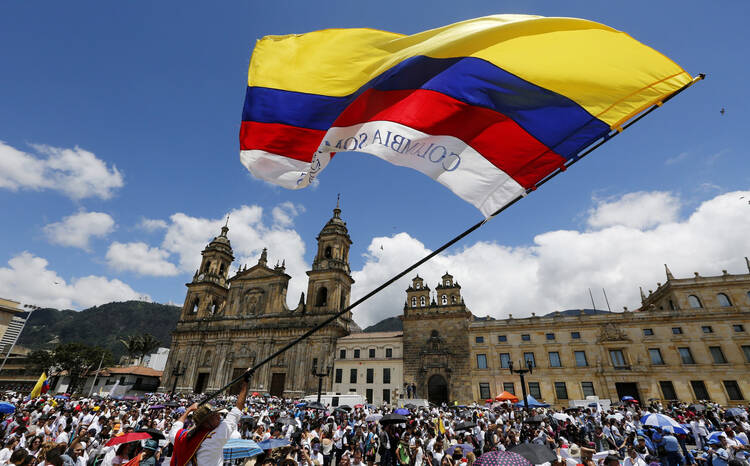 Pope Francis can play “a fundamental role” in Colombia by speaking of peace as a right and a duty and by making clear to the people that the conflict in the country today is “more ideological than bellicose,” Professor Hernan Olano Garcia, who teaches in Universidad de La Sabana, Bogotà, told America in an interview conducted by email on the eve of the pope’s visit.

Mr. Olano, director of the department of history and socio-cultural studies in the university’s faculty of philosophy and human sciences, also discussed the widespread political polarization in Colombia that is a major obstacle to the peace process.

The Colombian people receives Pope Francis at a moment of much polarization over the peace process. What do you see as the significance of his visit? What do you hope for?

The visit of Francis aims to get all Colombians to take the first step to reconciliation and to resist the political polarization that has prevented thinking about the implementation of the peace accord with the FARC. That includes accepting its new party “Fuerza Alternativa Revolucionario de Colombia” (Alternative Revolutionary Force of Colombia), as a viable option for the 2018 elections.

‘I hope that we overcome the fratricidal conflict that has marked the history of our country for two centuries.’

I hope that we overcome the fratricidal conflict that has marked the history of our country for two centuries, which is much more than the 52 years of conflict with the FARC.

How do you evaluate the present polarization in the country?

This polarization is a return to the epoch of the Frente Nacional (National Front), that period in which the members of the two existing parties—liberal and conservative—alternated in power and even divided the people, [getting them to] paint the windows and the doors blue or red according to the party they belonged to.

Perhaps the only thing that can calm the soul will be the “five white days” with Francis.

At this moment, the “santismos” [supporters of President Juan Manuel Santos] against the “urbismos” [supporters of former-President Álvaro Uribe] divides families. That’s why perhaps the only thing that can calm the soul will be the “five white days” with Francis, just as the “seven white days” when John Paul II was in Colombia in 1986 allowed us to embrace and cry together over our sorrows.

Do you believe that the presence of Pope Francis can serve to consolidate the peace process or convince the people of its necessity?

The government hoped to sell the visit of Francis as something that would put an armor around the peace accords, even ignoring that in the ratification of the peace accords, “no” won with 50.2 percent of the votes cast while the “yes” vote obtained 49.8 percent, which presented the following dichotomy: half of the country voted “yes,” while the other half voted “no”—while 63 percent of the electors remained indifferent.

For this reason, the pope can with his homilies, greetings and speeches play a fundamental role by speaking of the peace of the Gospel as a right, as well as a duty that has to be fulfilled, and so make clear that the conflict today is one that is more ideological than bellicose [unlikely to lead to armed conflict].

What are the main objections to the peace accords?

The implementation and the high cost of the political, economic and social benefits for the demobilized guerrillas and their families. Colombia continues to be a polarized state, unable to build a stable and lasting peace for the next generations and for the 50 million Colombians who live in this land or in the diaspora. People consider it inconceivable that 6,000 persons (from the FARC) are given such prerogatives.

What is the reason for the fact that up to now the E.L.N. (Ejército de Liberación Nacional) has not yet become part of the peace process?

It was only in 2017 that the public phase of the negotiation with the E.L.N. began. [The Colombian government] had demanded, up to now without success, that before negotiations could begin a verifiable cease-fire had to be in place so as to avoid armed attacks and actions against civil society, and attacks had to cease against infrastructure and, in particular, the petroleum sector. [Another requirement was] to free those captured and to identify a guerilla command for unified negotiations.

It is hoped that on the eve of the arrival of Francis there will be a clear pronouncement [on the peace process]—especially when one takes into account that in Villavicencio there will be the beatification of Bishop Jesús Jaramillo Monsalve, who was assassinated by the E.L.N. in 1989. The pope will probably issue a call to [be aware of the moment] and ask that [E.L.N.] join the effort for a definitive peace accord with the Colombian state.

What are the three main problems in Colombia today?

First, the corruption of justice, especially of the Supreme Court of Justice and of Congress.

Next, narcotrafficking that continues on a large scale, although its chiefs are less visible than they had been in the 1990s.

Third, the nation’s large informal economy, which has been a source for capital from the corrupt as well as from the guerillas and the drug dealers, who have joined it for enterprises of evil.

What is the role of the church in the country?

Many years ago, [the church] created a National Commission of Reconciliation, which tried to reduce conflict and support people in the conflict zones. Last year, on the occasion of the signing of the peace accords, one archbishop said that anyone voting in favor of of the peace accord in the plebiscite was not a good Christian. This provoked the fury of the government and the applause of the opposition.

Could the crisis in Venezuela destabilize Colombia?

Yes, because Colombia, which was united with Ecuador and Venezuela in one republic between 1819 and 1830, plays the role of “the elder brother” to Venezuela and to this very day accepts without a visa hundreds of displaced persons of all social classes from Venezuela who are willing to work for half the existing minimum legal wage in Colombia, thereby opening even more the social inequality that has characterized Colombia. It has already become a country of economic and political “castes.”

How is Pope Francis seen in Colombia?

The pope is seen as a man who with intelligence, charisma and coherence manages the most important global multinational in the world. He is a man who has influence in what is the 10th most Catholic country in the world.

Francis comes as a messenger of hope and of joy, and we hope that he will sow in our hearts the seeds of reconciliation and peace.