Can Pope Francis help Venezuela step back from the edge?

Can Pope Francis help Venezuela step back from the edge? 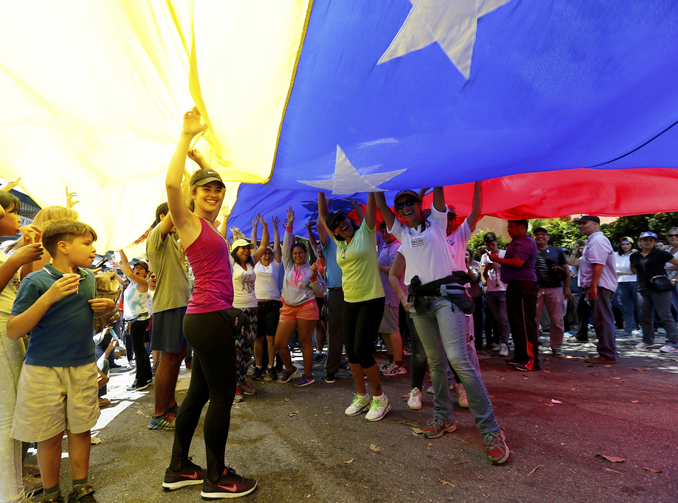 Opposition members wave a Venezuelan flag outside a poll station during a symbolic referendum in Caracas, Venezuela, on July 16. Venezuela's opposition called for a massive turnout Sunday in a symbolic rejection of President Nicolas Maduro's plan to rewrite the constitution, a proposal that's escalating tensions in a nation stricken by widespread shortages and more than 100 days of anti-government protests. (AP Photo/Ariana Cubillos)

On July 2 at St. Peter’s Square, Pope Francis made yet another call for dialogue to end the violent unrest in Venezuela. Photos do not show a dove of peace alighting on his shoulder, but what happened six days later in Caracas made some Venezuela watchers wonder if he had summoned a minor miracle.

On July 8, Venezuelan opposition leader Leopoldo López—who was jailed in kangaroo-court fashion three years ago for leading anti-government protests—was released from a military prison. Mr. López was simply moved to house arrest to serve out the rest of his 14-year sentence. Still, the international community applauded the gesture as a sign of flexibility from President Nicolás Maduro and his increasingly authoritarian socialist regime.

Some also hoped it was a signal Mr. Maduro might finally be ready to embrace the Vatican’s outline for a negotiated settlement to the increasingly deadly standoff between that regime and the Venezuelan opposition.

Venezuela, the Western Hemisphere’s most oil-rich nation, is spiraling through the worst economic collapse in the world today—including harrowing food and medicine shortages—thanks to depressed crude prices and gross left-wing mismanagement. Since April, more than 90 people have been killed during massive anti-government protests.

Rome is urging Mr. Maduro and the socialists—known as the Chavistas after their revolution’s late founder, Hugo Chávez—to hold the elections they are now blocking, release hundreds of political prisoners like Mr. López and restore the democratic separation of powers they have mowed down.

But in reality the pope, who helped the bitter enemies of the United States and Cuba forge a historic rapprochement three years ago, will need a major miracle to extract any of those concessions from the Chavistas. They have ruled Venezuela for 18 years and, despite a near-90-percent public disapproval rate, still enjoy the support of the military.

Rome is urging Venezuela President Maduro and his Chavistas to hold the elections they are now blocking, release hundreds of political prisoners like Mr. López and restore the democratic separation of powers they have mowed down.

In fact, say diplomatic sources, Mr. Lopez’s transfer resulted less from Francis’ plea than from international condemnation of Chavista thugs who stormed the opposition-controlled National Assembly on July 5 (Venezuela’s independence day) and bloodied a number of legislators. The López “release,” they say, was simply Mr. Maduro’s grudging attempt to clean the regime’s image a bit as it moves ahead with a scheme to rewrite Venezuela’s constitution.

Maduro announced that project, called the Constituyente, without the approval of Venezuelan voters, as the current constitution mandates. The Chavistas, who plan to start the Constituyente process on July 30, are expected to gift themselves dictatorial powers similar to those the Castro regime exercises in communist Cuba. Said Mr. Maduro this month: “Nothing is going to stop this.”

As one South American diplomat in Caracas told me, “The Chavistas now seem even more frighteningly ideological than the Cubans. They really believe this is the way out of Venezuela’s crisis.”

But that diplomat, like many in the Americas, fears the Constituyente will only throw gasoline on Venezuela’s flames. Says opposition Assembly Deputy José Gregorio Correa, “An angry 90 percent of the population is not going to tolerate 10 percent imposing this fraud on them by fiat.”

Which is why Venezuela’s Roman Catholic bishops are issuing statements much less politic than the pope’s. This month the country’s top Catholic prelate, Archbishop Diego Padrón, followed Francis’ appeal with a more exasperated declaration: Mr. Maduro’s Constituyente, he said,“represents the institutionalization of a military, socialist, Marxist and communist dictatorship.”

Venezuela’s crisis, Archbishop Padrón added, “is now a struggle between a government-turned-dictatorship and a people calling for freedom.” His assessment seemed borne out a week later when Chavista authorities arrested and jailed yet another opposition leader, Carlos Graffe, on vague sedition charges.

But the opposition, often hampered by internal division and strategic missteps, made a decidedly smart move on July 16 by sponsoring a symbolic plebiscite on the Constituyente. More than 7 million Venezuelan voters, in Venezuela and expat communities around the world, issued a resounding No—one they hope will move the international community to make Mr. Maduro halt the constitutional rewrite.

Turnout was especially strong in Miami, home to the largest Venezuelan enclave in the United States. More than 100,000 expats like Patty Fucci cast votes. “This is tangible proof for the international community of what the Venezuelan people want,” said Ms. Fucci.

We will see now if the people can pull off in Venezuela what the pope has not.

There is only one economy in South America which is working, and the manner in which they achieved this distinction is inimical to the Vatican, particularly in its Bergolian state. Is there some sinister sadism in the embrace of socialism which characterizes the Curia, are they happier in self-flagelation than in unshackling the polis with economic liberalism, and seeing in the individual "imago Dei"?

This article also appeared in print, under the headline “Can Pope Francis help Venezuela step back from the edge?,” in the August 7, 2017, issue.