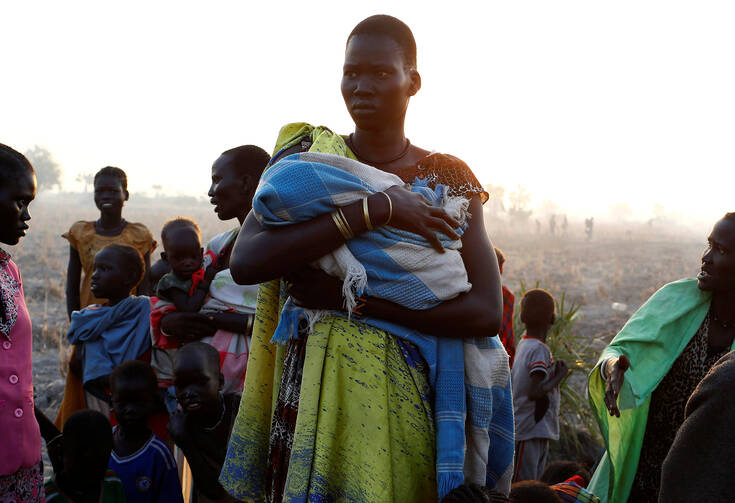 The United Nations declared the first famine since 2011 on Feb. 20 in parts of South Sudan. (CNS photo/Siegfried Modola, Reuters)

Coverage of the recent summit of G-20 leaders in Germany was so dominated by personality politics (particularly the meeting between Donald J. Trump and Vladimir Putin) that a highly consequential policy change by the United States risked going overlooked: the president’s pledge to spend an additional $639 million to fight famines in Africa and the Middle East. Without the immediate release of those funds, an estimated 400,000 to 600,000 children will probably die of starvation in the next four months, according to David Beasley, the head of the United Nations’ World Food Program and former Republican governor of South Carolina.

It is a welcome change in the Trump administration’s policy and frequently isolationist rhetoric. In March the White House released a budget proposal that cut foreign aid over all by one-third. This reduction, unlikely to be approved by Congress, would be unconscionable at a time when the world is facing the unprecedented threat of four famines at once. In Somalia, Yemen, South Sudan and eastern Nigeria over 30 million people are estimated to be at risk of starvation if the global community does not act now.

What makes these four famines especially tragic is that they are, for the most part, man-made. Periods of mass starvation due to drought or natural disasters have plagued humanity since the dawn of agriculture. But today, famine is a byproduct and at times a tool of war. In February the United Nations officially declared a famine in parts of South Sudan, which has been torn apart by ethnic strife and civil war since its founding in 2011. To make matters worse, aid workers trying to bring relief to areas affected by war and famine have been the target of attacks by fighters on both sides of the conflict. The United Nations alleges that the government has prevented its convoys from entering rebel-held areas.

Meanwhile, Somalia, where the Islamist militant group al-Shabaab controls much of the country, is threatened with its second famine in five years. Six million people are in need of food aid. In eastern Nigeria, fighting between the government and the Islamist insurgent group Boko Haram has decimated the agriculture sector, leaving 4.8 million “severely food-insecure,” according to the U.N. Office for the Coordination of Humanitarian Affairs. Finally, in Yemen, a civil war between the Saudi Arabia-backed government and Iran-backed Houthi rebels has created a humanitarian disaster. Saudi Arabia, the world’s biggest purchaser of military weapons from the United States, has imposed a blockade on the country and bombed transportation and agricultural infrastructure; an estimated seven million people face starvation.

The Trump administration should be commended for stepping up in the face of these crises and increasing what has been called “soft power”—the promotion of American values and ideals through humanitarian aid rather than military might alone. Global leadership, however, requires more than a one-time donation to solve an obvious and visible crisis. Climate change is expected to make drought and famine more common in the countries least able to cope with its effects. If Mr. Trump is unwilling to join, much less lead, the world community in farsighted efforts to protect the planet, he can expect to spend many millions more fighting the hunger and displacement sparked by a changing climate.

Re: “President Trump Steps Up to Fight Famine”: While I appreciate the value of recognizing a rare humanitarian gesture by the Trump administration, this piece neglects to directly acknowledge U.S. culpability for the famine in Yemen, caused largely by a Saudi-led and U.S.-supported coalition. Reports from the U.N. and humanitarian organizations have repeatedly confirmed the coalition’s targeting of civilians and civilian infrastructure and blockading of critical humanitarian aid to the desert country that imports 90% of its food and has been ravaged by a cholera epidemic. Yet the U.S. continues to provide billions of dollars of weapons, fuel for coalition jets, and military intelligence to support the war effort. In June, a commendable bipartisan effort to block $500 million of arms sales to Saudi Arabia in an effort to hold the regime accountable narrowly failed to pass in the Senate.

As the conflict approaches its fourth year, it is worth noting that in supporting the coalition, the Trump administration has simply picked up where the Obama administration left off. By selling many billions of dollars’ worth of military weapons with no strings attached to regimes that brazenly use them to indiscriminately and sometimes deliberately slaughter civilians, perpetuate a severe famine, and block desperately needed aid, our elected representatives have been complicit in these crimes. Pledging to commit a small fraction of the amount of our annual military support for Saudi Arabia to fight famine may be better than nothing, but a far better and more effective solution would be to use our obvious leverage to press for a diplomatic resolution of the conflict and to end our complicity in the atrocities that made this man-made famine possible in the first place.

Just wondering where you get your information in the American media??

Just wondering where you get your information in the American media??