Pope to G20 Leaders: To stabilize the world economy, you must resolve conflicts and the problem of migrations

Pope to G20 Leaders: To stabilize the world economy, you must resolve conflicts and the problem of migrations 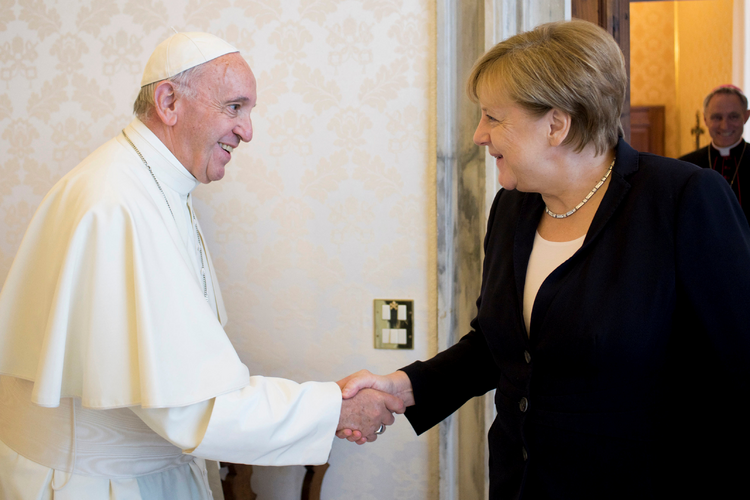 Pope Francis told world leaders at the G20 Summit in Hamburg, Germany, held July 7-8, that their efforts “to ensure the governability and stability of the world economy, especially with regard to financial markets, trade, fiscal problems” should be seen as “inseparable from the need to address ongoing conflicts and the worldwide problem of migrations.”

Francis stated this in a 1,200-word letter addressed to the German Chancellor, Angela Merkel, and requested by her at their private meeting in the Vatican on June 17. Ms. Merkel is hosting the summit which brings together the leaders of 19 industrialized and emerging economies, including the United States, China, Russia and India, as well as the European Union. This group counts for 85 percent of the world’s GDP and two-thirds of the global population.

In his letter, Francis emphasized the need for multilateral solutions to the problems facing humanity today. He told the G20 leaders that “the gravity, complexity and interconnection of world problems is such that there can be no immediate and completely satisfying solutions.” He pointed to “the migration crisis, which is inseparable from the issue of poverty and exacerbated by armed conflicts” as proof of this.

He offered words of hope and encouragement by telling them that, while there are no immediate adequate solutions, “it is possible, though, to set in motion processes that can offer solutions that are progressive and not traumatic, and which can lead in relatively short order to free circulation and to a settlement of persons that would be to the advantage of all.”

He told them that “an effective solution” over time “will be possible only if the final objective of the process is clearly present in its planning” and said that “at every phase of the enactment of political measures” it is necessary “to give absolute priority to the poor, refugees, the suffering, evacuees and the excluded, without distinction of nation, race, religion or culture, and to reject armed conflicts.”

In this context, he made a heartfelt appeal to these powerful world leaders, including Presidents Trump, Xi Jinping and Vladimir Putin take urgent action to resolve “the tragic situation in South Sudan, the Lake Chad basin, the Horn of Africa, and Yemen, where thirty million people are lacking the food and water needed to survive.”

He called on the G20 leaders also “to put an end” to the “vast panorama of current and potential conflicts” in the world today. He told them that “it will not be possible” for them to achieve their goals in economic and development fields “unless all parties commit themselves to substantially reducing levels of conflict, halting the present arms race, and renouncing direct or indirect involvement in conflicts, as well as agreeing to discuss sincerely and transparently all their differences.”

Pope Francis said that to resolve the major world problems today there is a need for “a broader vision.”

He reminded the G20 leaders that “the fateful ideologies of the first half of the 20th century have been replaced by new ideologies of absolute market autonomy and financial speculation” that bring “exclusion, waste and even death.”

But to resolve the major world problems today he said there is a need for “a broader vision” that moves beyond the specific issues. He reminded them that the G20 includes only a limited number of countries “that represent 90 percent of the production of wealth and services worldwide” and asked what about “those states and individuals whose voice is weakest on the world political scene are precisely the ones who suffer most from the harmful effects of economic crises for which they bear little or no responsibility?”

He urged the G20 leaders “to continue promoting a multilateral approach” to the current problems and to make constant reference to the United Nations, its programs and associated agencies and regional organizations and “to respect and honor international treaties.”

He concluded by asking God’s blessing on the G20 summit and other efforts “to shape a new era of development that is innovative, interconnected, sustainable, environmentally respectful and inclusive of all peoples and all individuals.”

This quote from the report is genuinely heartwarming from the point of view of an old planner.

“He told them that ‘an effective solution’ over time ‘will be possible only if the final objective of the process is clearly present in its planning’ and said that ‘at every phase of the enactment of political measures’ it is necessary ‘to give absolute priority to the poor, refugees, the suffering, evacuees and the excluded, without distinction of nation, race, religion or culture, and to reject armed conflicts.’”

It is fairly common in a long term planning effort to get wrapped up in the process, especially as the years go on and some steps in a strategy fail, as some inevitably must. Necessary changes in the strategy tend to take priority in terms of urgency of attention, and it is at these times when it seems that the final objective tends to lose centrality.

Unfortunately, it is at these times that strategic errors tend to creep in, because when the policy objective gets fuzzy, it is not possible to evaluate properly the relevance and feasibility of new strategies, nor is it likely that the original guiding principles will receive the attention they originally received.