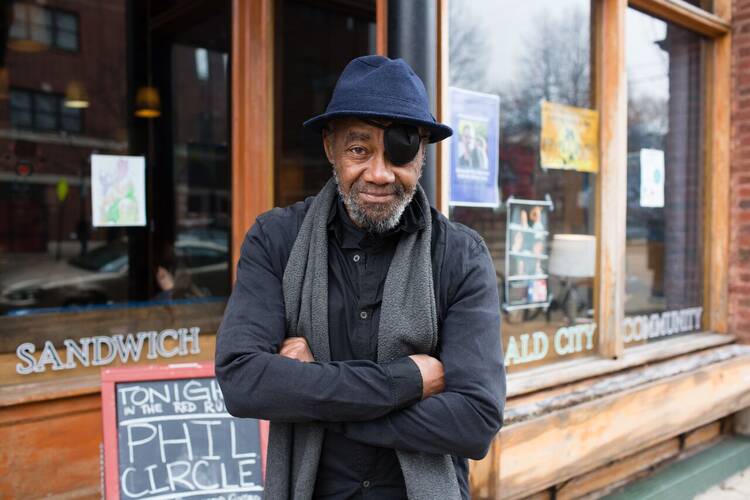 During his lifetime, racial descriptions advanced from colored to Negro to black to, most recently, African-American. But something about all of those later designations bothered Mr. Thompson, one of the first African-Americans hired by a major Chicago advertising agency.

Now he is on a crusade to convince people of all races that this is not a black or white matter. Human beings represent a range of color.

“I’m saying we’re all colored people,” Mr. Thompson says.“Nobody is purely anything. We are part of the human spectrum. Anything else is an old idea, like the flat earth.”

“I’m saying we’re all colored people,” Mr. Thompson says.“Nobody is purely anything. We are part of the human spectrum. Anything else is an old idea, like the flat earth.”

Using the artistic skills he honed during his years in advertising, Mr. Thompson has created a coloring book he calls, Some of My Best Friends Are Colored. The title, he says, is tongue-in-cheek, but its message is not. The book contains drawings of real Chicagoans that others are invited to color as creatively as they see fit. Mr. Thompson calls the project a “fun and interesting way to open up a dialogue” about race.

The Chicago Community Trust, an organization that seeks solutions to the city’s problems, thinks so, too. The Trust is helping Mr. Lowell print hundreds of his coloring books to hand out as part of the organization’s upcoming “On The Table” series of discussions about race.

These get-togethers, in which small groups gather for meals, are a response to ongoing tensions between the Chicago police and minority communities as well as incidents like a Black Lives Matters march last November in a largely Irish-Catholic South Side neighborhood that devolved into an ugly confrontation over race. Members of the Community Trust have met with Chicago Cardinal Blase Cupich, and the archdiocese will have several groups participating in the discussions as part of the cardinal's recent initiative to seek solutions to the street violence plaguing some of the city's neighborhoods.

Daniel Ash, who oversees civic engagement at the Community Trust, said issues of race, inclusion and equality are topics that have come up in previous years' discussions. In deciding to make race the focus of the discussions this year, Mr. Ash said the organization was looking for creative, interesting and inoffensive ways to spark the conversation.

He hopes Mr. Thompson's project can "create a pathway into conversations with people who might normally try to shy away from this topic."

“Most of us in the USA know our colors by age 4 or 5,” Mr. Lowell writes at the beginning of Some Of My Best Friends Are Colored. “But by the time we reach adulthood, we’ve been convinced that most people are either ‘black’ or ‘white.’ The evidence right before our eyes tells us something very different.”

He says describing people by the color of their skin is rooted in a social construct that aimed to denigrate people of certain races and elevate others.

“The social and political system decided certain people were black and because of that, they could be treated as subhuman,” he says. “That is the basis of the racial problem we still have today. It’s time to bite the bullet and say that is wrong and move beyond it so our children are not still dealing with this outdated, dangerous concept.”

Mr. Thompson’s life mirrors the changes that have occurred in race relations in the last half-century. He grew up in the Bronzeville section of Chicago’s South Side. As a child, the only white people he encountered on a regular basis were police officers, an insurance salesman who came to peddle policies and a man who sold candy from a truck.

“I never thought about race until Emmett Till was killed,” Mr. Thompson says, referring to the Chicago teenager who was brutally beaten, shot and then dumped into the Tallahatchie River while on a visit to Mississippi to see relatives. His supposed offense: flirting with a local white woman.

“I developed from that point on a fear of going down South,” Mr. Thompson says.

Emmett Till’s brutal death helped galvanize the African-American community, and Till later became an icon of the civil rights movement. In Mr. Thompson’s neighborhood, not far from where members of the Till family lived, he says people began to speak in hushed tones about race.

Mr. Thompson, now 69, went on to become one of the first African-Americans hired by a major Chicago advertising agency. He progressed from pasting storyboards at the Foote Cone & Belding agency in 1968 to working on the first “Take A Break At McDonald’s” commercial geared toward African-Americans for fast food giant, McDonald’s Corp.

He eventually became an art director at J. Walter Thompson, where he developed ads for Kemper Insurance and Kraft cheese.

He acknowledges his use of the term “colored” is at first off-putting to some African-Americans. He says they eventually come around when he explains his reasons for using it.

The idea appeals to Kimberley Rudd, a young African-American public relations specialist who often works with the Chicago Y.M.C.A.’s Office of Youth and Violence Prevention.

“You are no more white than I am black,” she told me. “According to Crayola, you’re more of a pink blush and I see myself as chocolate brown.”

Mr. Thompson will hand out his coloring books at an event on May 15 at the Emerald City Café in Uptown, one of the city’s most racially and culturally diverse neighborhoods, where he now lives. His own portrait is on the cover. He is the man with a beard in the fedora sporting an eye patch and holding a palette of paints. Behind him is a crowd of smiling Chicagoans of various genders and ages.

“People can color the faces as they see fit,” he says. “It’s like a cooperative art piece. No portrait is going to be the same,” he says. He plans to offer prizes for the most creative coloring jobs.

The following day, he will lead an “On The Table” discussion at the café on possible solutions to the city’s racial tensions. He says Some Of My Best Friends Are Colored was always meant to spark deeper, more serious discussion.

He would like to be able to distribute his coloring book in cities throughout Illinois and eventually across the nation. Can a coloring book become part of the solution for our nation’s toughest, longest-running and potentially most devastating problem?