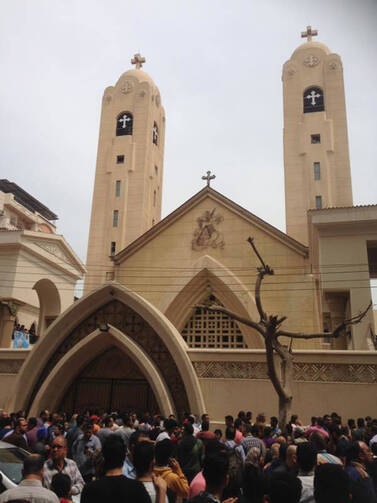 Pope Francis on Sunday decried a deadly attack on a Coptic church in Egypt during Palm Sunday celebrations, just weeks before his planned visit to Cairo.

The pontiff expressed his "deep condolences" to the Coptic patriarch, Tawadros II, calling him "my brother," to the Coptic church and "all of the dear Egyptian nation," and said he was praying for the dead and injured in the attack that occurred just hours earlier as Francis himself was marking Palm Sunday in St. Peter's Square.

The attack in the Nile Delta town of Tanta was the latest in a series of assaults on Egypt's Christian minority.

The pope's remarks on the church attack were handed to him on a piece of paper after he remembered the victims of the Stockholm attack Friday night.

The pope and cardinals in red robes led a solemn process clutching elaborately braided palm fronds as they walked through the throngs, followed by the papal blessing of palm fronds and olive branches.

The processions recalls the bittersweet nature of Holy Week, with the faithful clutching simple palm fronds and olive branches to commemorate Jesus' triumphant entrance into Jerusalem only to be followed later by his death on a wooden cross.

In his homily, the pope remembered the suffering in the world today, citing those who "suffer from slave labor, from family tragedies, from diseases ... They suffer from wars and terrorism, from interests that are armed and ready to strike."

The attack in the Nile Delta town of Tanta was the latest in a series of assaults on Egypt's Christian minority, which makes up around 10 percent of the population and has been repeatedly targeted by Islamic extremists. It comes just weeks before Pope Francis is due to visit the Arab world's most populous country.

A bomb exploded in a church north of Cairo that was packed with Palm Sunday worshippers, killing at least 26 people and wounding 71 others, officials said.

CBC TV showed footage from inside the Mar Girgis church, where a large number of people gathered around what appeared to be lifeless, bloody bodies covered with papers. Regional Deputy Health Minister Mohammed Sharshar confirmed the toll.

No one immediately claimed the attack, which comes a week before Easter.

Grand Sheikh Ahmed el-Tayeb, head of Egypt's Al-Azhar — the leading center of learning in Sunni Islam — condemned the attack, calling it a "despicable terrorist bombing that targeted the lives of innocents."

The attack adds to fears that Islamic extremists who have long been battling security forces in the Sinai Peninsula may shift their focus to civilians.

An Islamic State affiliate claimed a suicide bombing at a Cairo church in December that killed around 30 people, mostly women, as well as a string of killings in the restive northern Sinai that caused hundreds of Christians to flee to safer areas of the country.

The group recently released a video vowing to step up attacks against Christians, who it describes as "infidels" empowering the West against Muslims.

Egypt has struggled to combat a wave of Islamic militancy since the 2013 military overthrow of an elected Islamist president.

The Sinai-based IS affiliate has mainly attacked police and soldiers, but has also claimed bombings that killed civilians, including the downing of a Russian passenger plane over the Sinai in 2015, which killed all 224 people on board and devastated Egypt's tourism industry.

Egypt's Copts are one of the oldest Christian communities in the Middle East, accounting for around 10 percent of Egypt's 92 million people and have long complained of discrimination.

The Copts were largely supportive of the military overthrow of President Mohammed Morsi, a senior Brotherhood figure, and incurred the wrath of many Islamists, who attacked churches and other Christian institutions after his ouster.