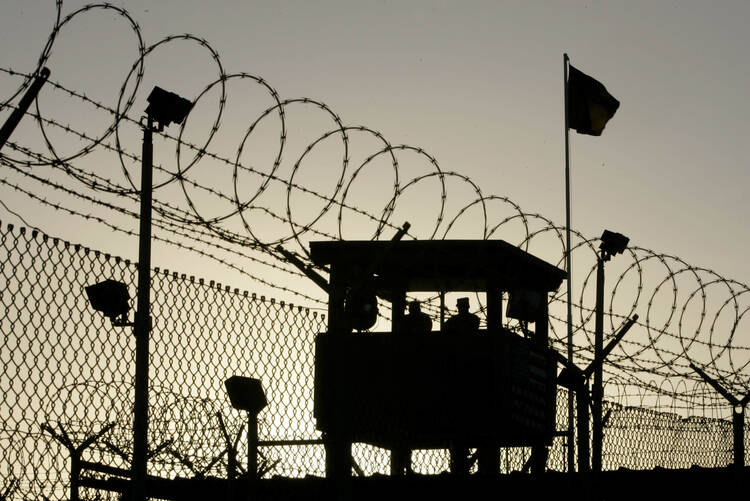 U.S. Army troops stand guard over Sally Port One at Camp Delta in 2006 where detainees are held at the U.S. Naval Base in Guantanamo Bay, Cuba. (CNS photo/Joe Skipper, Reuters)

The Guantánamo Bay detention camp presents one of the great political, legal and moral dangers of our time. Of the hundreds of men held there over the past decade and a half, 41 remain. Only 10 of those are at some stage of prosecution before the special Guantánamo tribunals, the so-called military commissions. That figure includes five men accused of planning the Sept. 11, 2001, attacks.

As a senior attorney for the U.S. Department of Defense, I have represented several Guantánamo detainees slotted for trial. I submit that the single greatest danger these tribunals pose is the fact that they are built upon a form of apartheid; the Guantánamo tribunals are a separate and unequal justice system into which noncitizens have been segregated. That creates a precedent that endangers us all.

The Guantánamo tribunals are an embarrassment to American standards of due process.

Two cases going before the Supreme Court in the next few months challenge the constitutionality of the Guantánamo tribunals on various legal grounds. But the most important question the court will have to answer is whether the war on terrorism has made obsolete the constitutional commitment to equality before the law.

The Guantánamo tribunals are notoriously flawed. Despite costing more than a billion dollars so far, they have yet to produce a single conviction that is not tainted by legal doubt. They have been bogged down for a decade by uncertainty over what the law is and the exorbitant expense of maintaining an ad hoc court system on an isolated naval base in Cuba. The alleged perpetrators of the Sept. 11 attacks are not expected to stand trial until at least 2020, depriving the 3,000 people who died on that day, and their families, of justice for over a generation.

These tribunals are also an embarrassment to American standards of due process. They are subject to routine political interference, are often conducted in secret and are presided over by judges who lack independence. Lax rules of evidence allow for the admission of everything from “hearsay” (legal jargon for rumors) to evidence derived from torture.

I suggest that all of this is possible only because the Military Commissions Act, the law creating these tribunals, limits their jurisdiction to the trial of noncitizens—and only noncitizens. That means there are 43 million people residing in the United States who are subject to this law. But the terrorists responsible for the massacres at San Bernardino, the Pulse Nightclub in Orlando, Fla., and Fort Hood, as well as the Boston Marathon bombing, are not. Those attacks were all perpetrated by citizens who must be tried in the real court system, where nearly 500 suspected terrorists have been successfully prosecuted since Sept. 11, 2001.

There are many legal reasons that the Supreme Court should strike down this segregation of the justice system. Most important, though, is that for all the dark periods of bigotry and national danger in U.S. history, this is the first time that we have retreated from the constitutional commitment to equal justice under law that has governed this country since the end of slavery. In fact, in every previous use of military tribunals, including those used to try Nazis during the height of World War II, citizen war criminals were tried on equal terms with noncitizens. The only countries that made the distinction now being made in Guantánamo were Germany and Japan. And after the war, the United States Army prosecuted the German and Japanese judges and lawyers involved in these trials for denying the most fundamental fair trial guarantee: the application of the Golden Rule.

Guantánamo perpetuates a naïve prejudice that the rule of law is a privilege belonging to “us” and not to “them.”

In his poem on the rise of the Third Reich, Martin Neimöller warned us that illiberalism accretes from the outside in. It is rarely sudden. It relies on precedent. “First they came for the Socialists, and I did not speak out—Because I was not a Socialist,” he wrote, as he confesses to keeping silent as they then came for the trade unionists and then the Jews. “Then they came for me—and there was no one left to speak for me.”

The Guantánamo tribunals have become a laboratory for the bare minimum of due process that the public can be convinced to accept. Each aberration, each shortcut on the rules of evidence, on torture or on judicial independence becomes a precedent. When Guantánamo was opened, the Bush administration intended it to be “the legal equivalent of outer-space.” But the truth is that it is only a few hundred miles from the American shore.

Morality and Morale: The experience of U.S. soldiers inside Guantánamo Bay
Luke Hansen

Defending ‘the Worst’: An interview with the lawyer of an accused terrorist
Luke Hansen

The Guantánamo tribunals perpetuate a naïve prejudice that the rule of law is a luxury, a waste of time or a privilege belonging to “us” and not to “them.” This paradigm is dangerous because the rule of law that we depend upon to protect us, to enforce our contracts and to secure our rights is a fragile thing. It depends on a shared confidence in the norms that give judges, courts and law their power to protect us from “them.” As the Rev. Niemöller reminds us, we are foolish if we think that being quiet in the face of injustice will keep us safe and on the inside; that we will remain with the “us.” What we do to the least of our brothers and sisters eventually becomes the rule for us all. 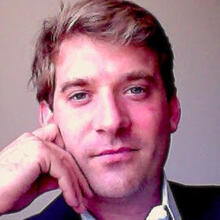 Michel Paradis is a senior attorney in the Department of Defense and a part-time law professor at Georgetown and Columbia law schools. He is the author of a forthcoming book on war crimes trials in the Pacific. The views expressed are his own and do not represent the position of the Department of Defense, the United States government or any agency or instrumentality thereof.

Guantanamo, the "great political, legal, and moral danger of our time" holds only 41 men? The military tribunal at Nuremberg tried only 22 at a time because that was the number of seats available. Civilian follow-ons to military tribunals, in Germany, and those run later by the UN, released countless killers or left them untried, and today's Hague Court has spent tens---if not hundreds---of millions well over a decade for only three convictions.
Vietnam, Rawanda, Central and South America, Serbia---the list of places with gernocidal killers untried seems endless. Why?--Lack of political will, followed by transferred "rights" that make even obvious guilt unpunishable.
Certainly it is better to legally error so as to favor the side of the innocent man, but only military tribunals seem to have the will to punish anyone, regardless of horrific acts and crimes against humanity committed by the defendants.

1. Jurisdiction at Guantanamo depends on the validity of the lease. The lease, unfortunately, is not valid. It was negotiated in order to allow the US to protect Cuba and the Cuban people. The Castro government is the valid successor to that promise, yet the US invaded Cuba in 1961, contrary to the expectation under the lease, and in violation of the 1934 Treaty of Relations, which abrogated that right. Material breach of contract. Pacta sunt servanda.
2. The Bill of Rights is the Bill of Human Rights. It is a limit on government power not a granting of procedural rights to citizens. "No person" may have expanded meaning since 1787, but the principle embedded in the 5th amendment remains the same.