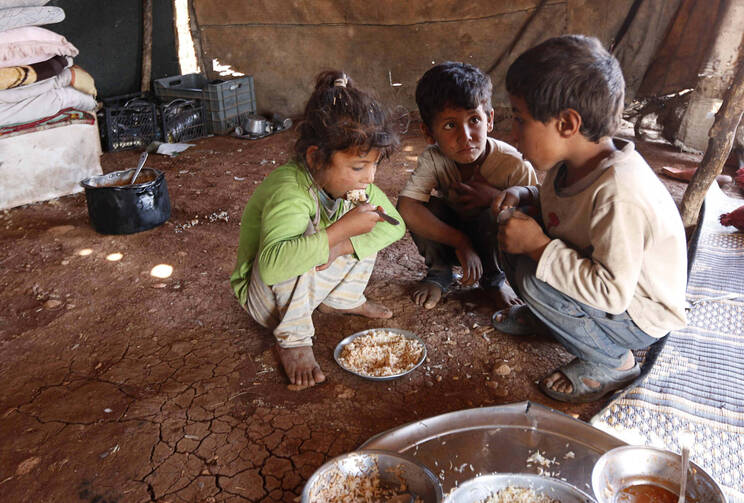 Ziad Hilal, S.J., the project consultant for Syria of the Aid to the Church in Need, has been stationed in Aleppo since Sept. 1, 2016. James Martin, S.J., recently asked him via email about his ministry there.

Can you describe the situation for the people in Aleppo at this moment?

From the time the armed conflict erupted in 2012 to this day, Aleppo has paid the greatest price on different levels: Socially, economically and environmentally, not to mention the humanitarian crisis.

Many people had to evacuate their houses and shops due to violence. So many lives were lost, leaving countless numbers of widows and orphans. Trees and park benches are chopped up by those seeking fuel for heat. Many homeless families are living in the streets, in deserted factories and semi-constructed buildings started before the war in the cold of winter. Most of the evacuated children have been without proper teaching or schooling for the last three years. This is a catastrophe for the upcoming generation.

The historic churches located in the old city area are destroyed beyond restoration. Aleppo was home to five million people before the war; now only 1.5 million remain. There were 120,000 Christians in the city six years ago; today, 30,000 Christians remain.

What do you hope for from the global community?

When the armed conflict erupted, regional and global powers took a side and did not hesitate to support it with money, weapons and fighters. The struggle became more foreign than domestic. The international media played a negative and provocative part—instead of showing the good parts of the other parties, it showed the violent and negative side. They did not take into account that such provocation would lead to nothing but deeper cracks in the fabric of Syria. Everything was lost. Fellow citizens became enemies rather than brothers and compatriots.

If the “free” Western world keeps watching the Syrian people suffer, how can they even dare to talk about human rights or write to our children about the basics of civilization? Not only by humanitarian aid do Syrians live. The people of Syria live when they sleep safely among their children, safe amid their family and loved ones, in their own homeland. What every Syrian wishes and prays for is for fighting to stop and for reconciliation among the fighting parties so that we can rebuild our country and live in dignity without the need to beg for help.

How have the events of the last six years challenged (or changed) your faith and the faith of your flock?

In the last six years, the church in Syria has suffered as dearly as Syria has. The Christians have suffered as their fellow citizens did. The church offered five martyred priests and one nun. Two bishops and three priests were kidnapped, not to mention thousands of martyred and kidnapped ordinary Christians. Half of the places of worship were destroyed or partially damaged.

Even though the number of Christians has dropped by half during the war, the bells still toll.

Even though the number of Christians has dropped by half during the war, the bells still toll. The remaining believers are still going to churches to worship God. Children are attending Christian education classes and the daily Mass accompanied by their families. The newly born are getting baptized, and the young couples are getting married. We are trying our best to live our faith as it was in the past before the ugly war.

Our faith is still strong, and through our church, humanitarian and social aid, we are trying to build peace and reconciliation. Jesuit Refugees Service provides 10,000 hot meals every day, in addition to medical and social services, for all the needy persons in Aleppo, regardless of their religion.

Where do you find God?

We find God in every act of mercy we do unto others. We find God in our daily prayers, in our church, in our prayers with the universal church and in our work with and aid to our Muslim fellow citizens. The life of the Christian martyr Frans van der Lugt, S.J., testifies that God is present even in the heart of daily violence. Father Frans transformed this violence into love toward the neighbors that may be different in opinion and religion. He turned the Jesuit house in Homs into a meeting house for both Christian and Muslim families, and they shared everything: food, drinks and even prayers.

We find God in every act of mercy we do unto others. We find God in our daily prayers, in our church and in our aid to our Muslim fellow citizens.

In such acts, we can say that God exists in any person who needs our presence. As Pope Francis said, “To live as true children of God means to love our neighbor and to be close to those who are lonely and in difficulty.”

Despite the harsh conditions and the violence and pain we endured during the war, we continue our mission, a dangerous mission. Of course, one gets scared considering all the deaths and violence that are directly affecting this life, but our solid belief helps us defeat this fear, knowing that God is with us no matter what. Our Lord and Savior Jesus Christ teaches us: “Peace I leave with you; my peace I give you. I do not give to you as the world gives. Do not let your hearts be troubled and do not be afraid” (Jn 14:27). Hope is always stronger than fear.

James Martin, S.J., is editor at large of America.