A college professor and a cop ask, 'Who are the elites, anyway?' 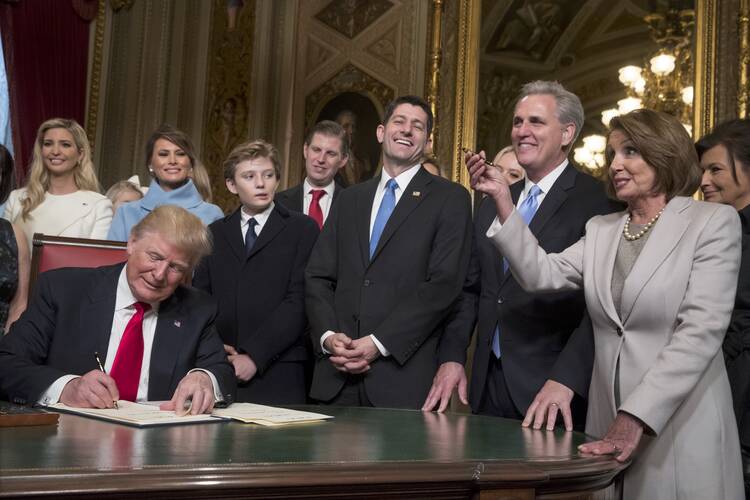 President Donald Trump is joined by the congressional leadership and his family as he formally signs his Cabinet nominations into law Jan. 20 at the U.S. Capitol in Washington. (CNS photo/J. Scott Applewhite, pool via Reuters)

We’re living in a populist moment, and any populism needs an elite to contrast itself against in order to exist. Donald Trumpstaked his presidential campaign against “powerful corporations, media elites and political dynasties.” During his first week in office, in the name of the people, he has busied himself with bulldozing apparently elite notions ranging from the size of his inaugural crowds and the existence of climate change to the fact that net migration across the Mexican borderhas been negative for years. Meanwhile, he has appointed what’s poised to be thewealthiest cabinet in modern history. And he is himself, after all,the wealthiest president we have ever had. The meaning of “elite” appears to be no straightforward thing.

I’m a well-educated straight white guy who teaches at a research university; I have access to publishing in media that, at best, are on the fringes of the mainstream. I’m quite accustomed to being aware of my privilege, and I try to keep it in check. But I first wondered whether I might fall into that elite bucket the morning after this last election, when I received a pseudonymous email reveling in the defeat of a “hubris” I allegedly represented. Over the weekend, after myessay for America on the protests during Mr. Trump’s inauguration, I received a response on social media that said, after quoting a Latin motto, “There will always be a divide between the self-professed academic elites who think they know better and the working class like myself trying to survive on a day to day basis.” The implication was that the “self-professed academic elites” included me. The commenter concluded, “Two radically different concerns, ergo, constant friction.”

I can’t say this surprised me, given the present climate, but it did strike me as incongruous. Earlier that day, I received an email from a police officer who had served during the inauguration. He explained why he disagreed with what I had written, and shared some experiences of his own, and asked some questions about what seemed wrong about my position. I responded with some of my own experiences and tried my best to answer his questions. What I said made sense to him, as what he said made sense to me, and the exchange ended more amicably than it began, with more understanding on both sides.

As it happens, the average salary for a cop in my county and for an employee at my university is about the same; my salary is well within the range of what a cop might make. Probably more than on the police force, university instructors regularly work for precarious, poverty-level contracts with no benefits or guarantees, despite whatever authority they may hold in the classroom or in public; police officers, meanwhile, work under conditions of both considerable power and considerable risk. But I suspect that, according to the received wisdom of the moment, I might be considered elite and my cop correspondent would not. Mr. Trump likes cops, but he doesn’t like professors.

What is an elite? A powerful, unaccountable minority? Those with the capacity to silence or control or harm others? Perhaps one can find some cut-and-dried definition and settle the matter. But it’s hard to imagine one in which Trump and his cabinet wouldn’t top the list, before and after taking office. I find it more useful to think of the elite in the terms thelay theologian William Stringfellow used to describe the “principalities” and “powers”of the New Testament—the forces that pretend to rule the world, that seek to defy and distract us from the real power of God, who is love and life and justice. They wield what Stringfellow called “the power of death” to back it up, to make people believe them.

Mr. Trump’s vision seems at least analogous to this. He might phrase it a bit differently—say, the forces of political correctness and loserliness that prevent America from being great again. But, in the same way, elites are defined less by the position they hold than by their pretense to dictate reality.

If that’s the case, there is some capacity for elitism in many of us. It’s certainly in journalists and scholars, when we claim to hold some kind of special truth solely by virtue of our titles and our jargon. Police officers can have it, too; I saw it in court, recently, wherebody-camera footage showed a friend of mine assaulted by an officer without provocation—for which the friend, not the officer, is being punished.

The letter to the Ephesians warns “Our struggle is not with flesh and blood but with the principalities, with the powers.” The real fight is not against those we perceive to be elites, it’s against the demonic temptation of elitism. And the struggle is “ours,” together. If you’re worried about elites, that’s a call for better solidarity and for finding common cause, not for asserting one’s own power by striking out against those more vulnerable than oneself, by fending them off with walls.

Maybe this is the plea of a scared member of an elite, fearing what might come from a regime that shows every indication of imperviousness to either fact or compassion. I may be getting what I deserve, or succumbing to the power of death. But my exchange with the policeman this week seemed to me to belie the story told by the forces that now pretend to rule this part of the world. We are not condemned to “constant friction”; our communities are not mere “carnage.” A better reality is at work in our world, if we allow ourselves to inhabit it.

Nathan Schneider, a contributing writer for America, is the author of Thank You, Anarchy and God in Proof. Website: nathanschneider.info

Yes. I think that you are bordering on the mystical, Nathan. Most of the commentary both here (America magazine) and elsewhere is a battle of "realities". Who is right, who is wrong. It could be that the "reality" that we are all reaching for cannot be defined in political language, but only discovered through a kind of "allowing". Like talking to a cop. Most of my conversations with my neighbors deliberately do not involve politics and we find that we like each other and help each other out.