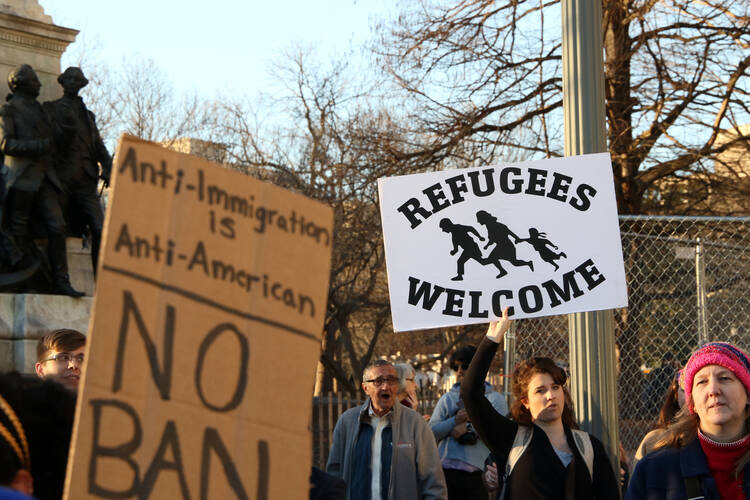 People protest against President Donald Trump's immigration policies during a demonstration near the White House in Washington Jan. 25. (CNS photo/Gregory A. Shemitz)

The chairman of the U.S. bishops' Committee on Migration criticized President Donald Trump's executive memorandum to construct a wall along the U.S.-Mexico border, saying it would "put immigrant lives needlessly in harm's way."

Bishop Joe S. Vasquez of Austin, Texas, chairman of the U.S. bishops' Committee on Migration, also criticized Trump's memorandum on a surge in immigrant detention and deportation forces, saying it would "tear families apart and spark fear and panic in communities."

Trump signed the two executive memorandums on national security Jan. 25 during a visit to the Department of Homeland Security.

Earlier, White House press secretary Sean Spicer said the wall, a cornerstone of Trump's election campaign, would "stem the flow of drugs, crime and illegal immigration" along the southern border. He also said Trump's top priority was the nation's security.

But hours later, Bishop Vasquez issued a statement saying that construction of the wall would "make migrants, especially vulnerable women and children, more susceptible to traffickers and smugglers. Additionally, the construction of such a wall destabilizes the many vibrant and beautifully interconnected communities that live peacefully along the border.

"Instead of building walls, at this time, my brother bishops and I will continue to follow the example of Pope Francis. We will 'look to build bridges between people, bridges that allow us to break down the walls of exclusion and exploitation.'"

During a February 2016 visit to Mexico, Pope Francis traveled to the U.S. border at Ciudad Juarez and pleaded for the plight of immigrants. He said those who refuse to offer safe shelter and passage were bringing about dishonor and self-destruction as their hearts hardened and they "lost their sensitivity to pain."

Bishop Vasquez said the bishops respected the government's right to control its borders and to ensure the safety of all Americans, but said, "We do not believe that a large-scale escalation of immigrant detention and intensive increased use of enforcement in immigrant communities is the way to achieve those goals. Instead, we remain firm in our commitment to comprehensive, compassionate, and common-sense reform."

He said the new policies would "make it much more difficult for the vulnerable to access protection in our country. Every day my brother bishops and I witness the harmful effects of immigrant detention in our ministries. We experience the pain of severed families that struggle to maintain a semblance of normal family life. We see traumatized children in our schools and in our churches. The policies announced today will only further upend immigrant families."

"We will continue to support and stand in solidarity with immigrant families. We remind our communities and our nation that these families have intrinsic value as children of God. And to all those impacted by today's decision, we are here to walk with you and accompany you on this journey," Bishop Vasquez said.

Donald Trump’s wall is a pro-life issue, too.
The Editors

At the Jan. 25 White House briefing, Spicer reiterated that Mexico would end up paying for construction of the wall. He said Trump would work with Congress on finding money to pay for the construction, noting, "there are a lot of funding mechanisms that can be used."

"You have American people out there working" and their tax funds are sent to places that do not enforce the law, he said.

The executive memorandums did not address the issue of DACA, the Deferred Action for Childhood Arrivals program, nor did they discuss emigration from the Middle East, which Spicer said would be addressed later in the week.

In 2006, President George W. Bush signed the Secure Fence Act, which authorized several hundred miles of fencing along the 2,000-mile U.S. frontier with Mexico. The Associated Press reported that legislation led to the construction of about 700 miles of various kinds of fencing designed to block both vehicles and pedestrians, primarily in Texas, New Mexico, Arizona and California. It said the final sections were completed after President Barack Obama took office in 2009.

AP reported that a 1970 treaty with Mexico requires that structures along the border cannot disrupt the flow of rivers that define the U.S.-Mexican border along Texas and 24 miles in Arizona.

The bishops of Arizona, which includes 389 miles of border with Mexico, reiterated their call for comprehensive immigration reform.

They said their "hearts and prayers go out to refugee families who have faced terrible violence and lost their own homes and now need a new place to live."

"Focusing on building a new border wall has the potential to take us away from these important considerations that impact vulnerable families and will ultimately be useless. Pope Francis has called for bridges, not walls, between people," the four bishops said in a statement.

In a blog, Cardinal Daniel N. DiNardo of Galveston-Houston reiterated the migration commission concerns about the border wall and an increase in deportations and detentions.

"The Archdiocese of Galveston-Houston is committed to an immigration policy that protects human rights, dignity and the homeland at the same time," he added.

To me, it remains an open question whether there is more humanitarian commonsense in deterring the sort of chaos at the border today that reflects a kind of "Death Race 2000" desperation -- whereby broken families make 1000-mile journeys to get in -- or whether some greater good might be accomplished by keeping the border open/ambiguous.

There are deep questions as well about whether nations have the right to their boundaries and whether democracy per se is weakened (on both sides) when a border is no longer enforced. Is the best kind of world a world in which the nation-state matters less and people get to live wherever they want? Perhaps.

I see very little written about whether families can be torn asunder by all the chaos, or children put at risk by being asked (made) to make such a journey. Yes, it's probably humane for the U.S. to accept this latest number of 10,000 children -- of course. But what about the message that sends to the next 10,000?

Many people quietly want to see civil order and question the liberationist-type theology that throws in with the drama of how many families can be resettled versus whether there are stabler, less dramatic ways to proceed.

The Vatican of course has its walls, and many in America who favor unfettered immigration live comfortably in their own gated communities. It is not always so obvious what is right.

It is also not particularly hard to quietly encourage mass migration, and then point at the huddled masses arriving in throngs and quote the gospels about their misery.

Letter sent Jan. 25 to President on White House web site. No reply yet.

Mr. President,
I am an American who has lived eight decades in acceptance of the message of the Statue of Liberty. As a lifelong New Yorker you are familiar with that message. And now you are in a position to embrace the message or to turn your back on it. Much of what you said during your campaign, and steps you appear ready to initiate now, are in contradiction of Berthold's statue and Lazarus' message.
As a descendant of immigrants I wrote to a fellow descendant urging restraint of your apparent fear of immigrants and refugees. Today it is just the people to whom you would prohibit entry into the country you want to make great again whose presence in our midst would help us to preserve the greatness which has endured generation after generation in large measure becaue of the contributions made by new Americans from every part of the world. One's native land or language or the color of one's skin or the name one uses when addressing one's Creator are not indicators of what will make that person an American. We are too big to make America small. We are too generous to make America selfish. Listen please, Mr. President, to our God imploring us to let God's people come to a land where they can be free and safe and we can be greater for their presence, their contributions.
Thank you, Mr. President.
Sincerely,
Reverend Franklyn J. Bergen
Episcopal Church of St. Matthew
Tucson, Arizona