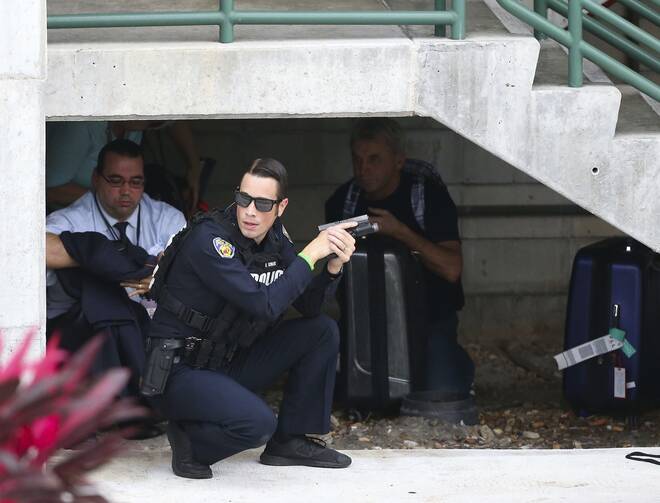 On Jan. 6, Epiphany, I experienced a more unfortunate kind of revelation—the nightmarish pandemonium of a mass shooting.

Early that Friday afternoon we got word at my newsroom that a lone gunman had opened fire inside the baggage claim area at Fort Lauderdale–Hollywood International Airport. I headed there from Miami, but as soon as I got to the airport highway, traffic was cut off by countless police cars, fire rescue trucks and armored SWAT vehicles. They were racing toward the airport with sirens blaring as deafeningly as a scene from “War of the Worlds.”

All hell had broken loose because people thought a second shooting incident was underway in an airport parking garage. As my car crawled forward I looked to my left and saw several police officers, guns drawn, approaching a man walking on the highway with his hands behind his head. They feared he was an escaping gunman. (He was not.) Down to my right I saw thousands of hysterical people running out of the airport terminals onto the tarmac; some of them appeared to be injured by the stampede.

But there had been only one shooting incident and one alleged shooter—a mentally disturbed military veteran named Esteban Santiago. Authorities say he arrived on a flight from Alaska, via Minnesota, and that he had checked his semiautomatic 9-millimeter handgun in a locked case. After retrieving it at the Fort Lauderdale baggage claim, authorities say, Mr. Santiago loaded it in a nearby restroom and came out blasting at people’s heads. He allegedly killed five and wounded eight others before the bullets ran out.

The number of gun control issues we are left to consider after this Fort Lauderdale rampage is bewildering. But it seems fitting that in this case we are pondering them in subarctic Alaska and subtropical Florida—two states that have some of the country’s most lenient gun laws.

The Sunshine State—a.k.a. the “Gunshine State”—considers itself a Second Amendment haven. In 2005 Florida was the first state to pass a controversial stand-your-ground law, which allows anyone, anywhere to use deadly armed force against someone if they feel their safety or life is in danger. Two decades before that it was one of the first states to grant permits to carry concealed guns in public.

When Florida last June became the site of the deadliest mass shooting by a single gunman in U.S. history—49 people killed in an Orlando nightclub—the state did some brief soul-searching about issues like how easy it is to obtain assault rifles there. The introspection probably will not last much longer after the Fort Lauderdale tragedy—in fact, the airport massacre may deepen Florida’s gun control hole.

Even before Jan. 6 there were a number of law-loosening bills lined up for the Florida legislative session that starts in March. One, in the state House, would repeal a ban on the concealed carry of guns into, yes, airport terminals. Another, in the state Senate, would permit the open carry of guns in a much broader range of locales, including high schools and government meetings.

Republican State Representative Jake Raburn, sponsor of the House measure, said, “I do personally feel like had this bill been [law] already, there could have been the potential for people to protect themselves” during Santiago’s alleged spree.

But like most Florida law enforcement supervisors, Broward County Sheriff Scott Israel—who is responsible for security at the Fort Lauderdale airport—is “opposed” to Mr. Raburn’s thinking because it “makes us less safe…allowing potential active shooters to…carry their deadly weapons right into airports to carry out their heinous acts.”

As for Alaska—where gun permits aren’t even required—it now has to explain why Mr. Santiago’s gun was returned to him even after he came to law enforcement and said voices in his head told him to be a terrorist. And the United States as a whole must now ask if being able to check guns onto flights—and then casually pluck them from baggage conveyors—makes much more sense itself.