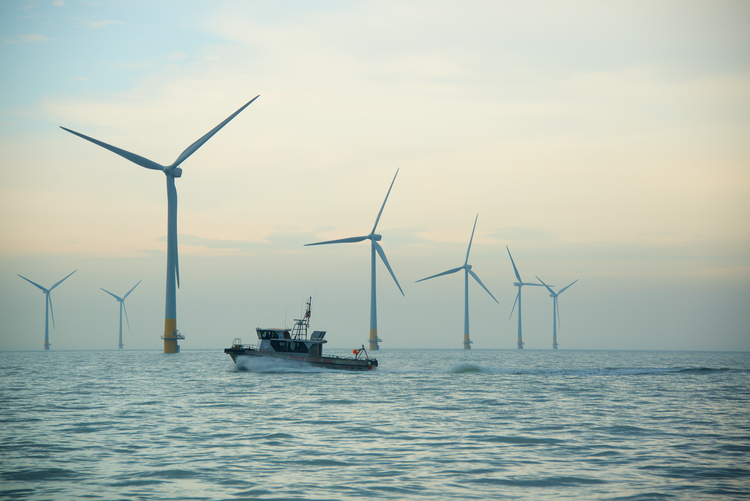 An Ill Wind Blows. Turbines like these off the coast of Kent, England will ruin Mr. Trump's Aberdeen view. (Photo by Robin Dawe/ Perfectly Clear Marketing)

We have heard “crooked Hillary” often enough from the lips or the tweets of Donald J. Trump, but now news breaks of another adjectival innovation from the president-elect. It has emerged that the former first minister of Scotland Alex Salmond, who nearly led his country to independence in 2014, stood firm against Mr. Trump often enough to earn his own disparaging moniker: Please step forward “Mad Alex.”

It was not Scotland’s “Indyref” that provoked the name-calling. It was Mr. Salmond’s temerity in opposing Mr. Trump’s plans for a top-end golf course and resort north of Aberdeen on the country’s northeastern coast.

The president-elect—recently acknowledged by an indigenous newspaper with the hyper-local headline: “Aberdeenshire business owner wins presidential election”—at first had Mr. Salmond’s support for his golf course and resort development. Mr. Salmond had even courted controversy in 2012 when he stepped in to overrule the local planning authority, which had refused permission because of the area’s protected status.

Mr. Salmond based his Trump-friendly intervention then on economic grounds. Many jobs would come to the locals. Mr. Trump’s organization is thought already to have spent some millions of pounds on the resort’s development, although some of the accounting has raised an eyebrow or two. If the U.S. president-elect were ever grateful to Mr. Salmond, it did not last long.

It turns out that Mr. Trump sent up to 16 increasingly angry and ad-hominem letters to Mr. Salmond—not about the independence plans of Mr. Salmond’s party or its objection to Brexit.

Mr. Trump had already got that one badly wrong. The day after the Euro referendum, he congratulated the people on “taking their country back” even though it was that other nation to the south, known as England, that had done that. The Scots rejected Brexit.

No, Mr. Trump’s angry correspondence concerned a wind farm project that would be within sight of his planned £750 million resort. Mr. Salmond and the Scottish National Party have backed renewable energy, but Mr. Trump doesn’t like it at all, it appears—especially when it is within sight of his self-described “world’s greatest” golf course. He does like getting his own way, and he was very annoyed about not getting his own way in Aberdeenshire.

In February 2012, he wrote to the then first minister: "With the reckless installation of these monsters, you will single-handedly have done more damage to Scotland than virtually any event in Scottish history." The private spat between the two men came to public attention thanks to a freedom-of-information request from the Huffington Post in the United States.

Mr. Trump issued legal challenges to the wind farm that went all the way to London’s Supreme Court; he lost them all. That started the remarkable exchange between Mr. Trump and Mr. Salmond, worse than could be heard on any school playground in the land. Yet it is inaccurate to think of this epistolary episode as a war of words. It appears that Mr. Salmond responded to Mr. Trump’s 16 increasingly bizarre letters with just one of his own in which he made no attempt to hide his disdain for his adversary’s White House bid.

Mr. Salmond explained that he refrained from responding until the Supreme Court in London had handed down its verdict. Among his rejoinders in the aftermath of that decision, Mr. Salmond branded Trump “three times a loser,” referring to the latter’s unsuccessful legal attempts to stop the offshore wind farm.

During the 2016 U.S. election campaign, Mr. Salmond definitively broke cover on his feeling toward the then candidate, urging U.S. voters to reject Mr. Trump because of his “bullying” and “unpredictable” temperament and targeted his remarks particularly at the many voters with Scots roots. He justified this move by noting Mr. Trump’s boasting of his Scots background: “He plays up his Scottish heritage a great deal, it gives him a certain cachet, a respectability because it’s a very honorable heritage to have in the United States.”

A Trump Organization spokesperson, in turn, retorted, “Does anyone care what this man thinks? He’s a has been [sic] and totally irrelevant.”

In his attacks on the wind farm, Mr. Trump contrived to link his heartache to the independence question, claiming at one point that his motivation was only to “save Scotland” and warning that, were the Scottish government to allow such renewable-energy projects to be rise along its coasts “your economy will become a third world wasteland that investors will avoid.”

In one recently-released letter from 2012, Mr. Trump announced that he wished to honor his Scottish-born mother, who had emigrated to the United States from the Western Isles, on other side of Scotland. She would, he asserted, “not believe what you,” that is, Mr. Salmond, “are doing to her beloved Scotland!”

Mr. Trump warned were Mr. Salmond to refuse to shift on energy policy, his dreams of Scottish independence would be “gone with the wind.”

It is easy and entirely justifiable to mock Scotland’s uneven and unpredictable climate; it is well-known that you can, as the locals will tell you, experience all four seasons in one day (or in some coastal spots, in 10 minutes). But that volatility has helped propel Scotland’s impressive progress on renewable energy. In Scotland onshore and offshore wind-generation is now a given, and research continues into wave-power. Scots will have to admit that solar might not be their strongest resource.

Over the past three years, renewable electricity has consistently comprised at least half of Scotland’s energy needs. On several days in 2016, records tumbled as wind-power generated over 100 percent of the nation’s needs. The surplus was exported by the U.K. grid south to England. The world’s first grid-connected tidal-array came into service, between the northern coast and Shetland, in 2016. There is overwhelming public support for continuing investment in renewables, and Scottish lawmakers imagine a 100 percent green energy status by 2050 if not earlier.

The contrast between that desirable outcome, with its obvious echoes of Pope Francis’s advocacy of climate-justice and “care for our common home,” and President-elect Trump’s proposed carbon-friendly cabinet could not be more stark. Mr. Trump has vowed to shred the hard-won Paris climate agreement and has denounced climate change as a Chinese hoax. As a man of business, he seems likely to favor profitability over sustainability.

Worldwide, as the tide turns, if you will, in favor of renewables, and big business discovers profit opportunities in this emerging energy sector, will the incoming U.S. administration imitate the fabled King Canute and try to turn back the tide?

Alex Salmond is no longer Scottish First Minister, having resigned in the wake of the 2014 referendum on independence, yet he still wields considerable power and influence, having subsequently won a seat in the Westminster parliament. His successor Nicola Sturgeon did not hide her disdain for the Trump candidacy, although she was accused by some of double-standards when she wrote a congratulatory letter to the president-elect, citing the “bonds of family and friendship and our close economic ties” between Scotland and the United States. Despite her nice note, the relationship between the two leaders will likely remain rocky. Ms. Sturgeon, who has recently described Mr. Trump as “repugnant” and “shocking,” had already stripped him of his Scottish Trade Ambassador status, mainly because of his anti-Muslim comments.

The half-Scottish president-elect has for years shown a lot of interest in the politics of his mother’s homeland, although Mr. Trump would appear to be at most lukewarm about Scottish independence or a possible second referendum. As the London government stumbles toward its Brexit implementation, Mr. Trump is likely to remain attentive to political developments in Scotland. He has consistently backed Brexit. Ms. Sturgeon believes that the clear preference to remain part of the European Union among Scottish voters should be respected—a position which may yet lead to a second independence referendum.

Ms. Sturgeon and Mr. Trump have recently spoken by phone. President Trump looks certain to seek to influence the unfolding Brexit drama in 2017. His opposition to that Aberdeenshire offshore wind farm is dead in the water, but his desire to have a say in Scotland’s internal politics will no doubt remain buoyant.

Show Comments (
3
)
Comments are automatically closed two weeks after an article's initial publication. See our comments policy for more.
John Walton
3 years 3 months ago
Scotland is heading into an economic hole...it's government deficit relative to domestic product is worse than Greece. Trump is correct. Parenthetically, every job in the wind sector costs UK taxpayers ₤100,000.
ed gleason
3 years 2 months ago
Trump's pride is investing in golf courses. The decline in golf rounds are now 30 %, THE DOPE /GENIOUS SHOULD GO INTO THE BUGGY WHIP BUSINESS, https://www.washingtonpost.com/news/wonk/wp/2015/03/05/why-america-fell-out-of-love-with-golf/?utm_term=.5c7733d98c31
Derrick Weiller
3 years 2 months ago
"With the reckless installation of these monsters, you will single-handedly have done more damage to Scotland than virtually any event in Scottish history....this, presumably, because As The Worth of Trump goes, so goes The Legacy of Robert the Bruce.
Advertisement
More: Donald Trump / Europe / US Politics / Climate Change