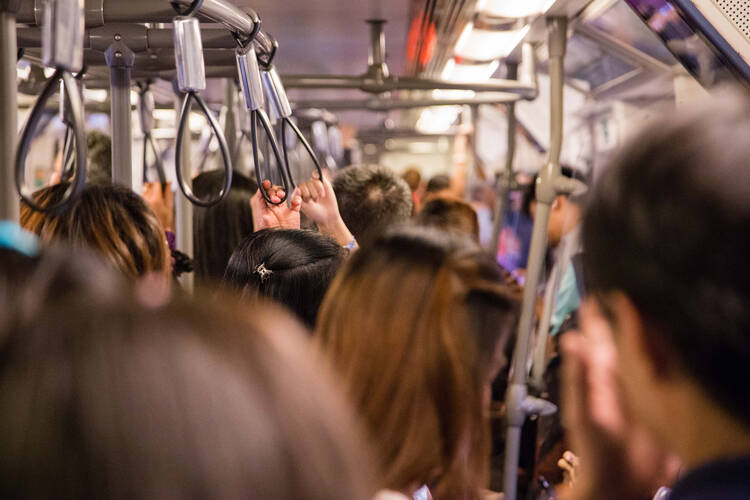 In contrast to education or health care, few think of transportation as a basic human right. But the ability to get from one place to another became an essential part of daily life as soon as farming ceased to be the way most people made a living. “We are all in a prison, physically speaking, where the walls are where we can get to in a reasonable amount of time,” the author of Human Transit, Jarrett Walker, said in a speech in December at the University of Pennsylvania School of Design. This statement rings true for anyone who has struggled to keep a job without spending an unsustainable amount of free time or money to get there.

The “transportation prison” is trapping more and more people in the United States, unable to keep up with the renewed sprawl of jobs and homes. In “Laudato Si’,” Pope Francis described the “suffering” associated with a worldwide dependence on cars, “causing traffic congestion, raising the level of pollution, and consuming enormous quantities of non-renewable energy” (No. 153). But despite such warnings, more housing is being built far from urban centers, and after the premature proclamation that the United States had hit “peak driving” in 2007, motorists are now logging more miles than ever. To promote economic growth, reduce global-warming emissions and, in many cases, provide enough hours for sleep, we need not only better roads but better and more equitable public transit. President-elect Donald J. Trump frequently complains about what he calls our “third world” airports, but the bigger embarrassment is that our national capital has a subway system that is falling apart and losing customers only a few decades after it was built.

Expensive rail projects are not always the answer. Taxi supplements like Uber, employer-provided shuttle buses and even bike-sharing programs can pick up the slack for people who cannot afford cars or parking. But these patchwork measures may not be enough in regions that face congestion on a wide scale. They may also worsen the economic divide, with low-income neighborhoods left to depend on decaying public transit lines while innovative services are offered elsewhere in the city. The Metro system in Washington, D.C., is partnering with Uber to provide reduced-fare service from certain subway stops, but it is not clear that privatized services, which have yet to show long-term profitability, can meet the demand from low-wage workers who must travel to distant neighborhoods at odd hours. Several studies have also shown that ride-sharing services can be affected by racial prejudice, with African-American customers having to wait longer for service.

There were some hopeful signs for public transit in November’s election. In Atlanta, located in a region notorious for sprawl, voters easily approved a half-cent sales tax to raise $2.5 billion for improving bus and rail service. The win came after a report by regional and state chambers of commerce saying that a long-term plan to expand the Marta public transit system would keep Atlanta competitive with other metro areas by reducing traffic congestion and increasing the number of jobs accessible by rail. (Passengers in that city have also volunteered to assist new riders and have contributed toward new bus schedules and trash bins at bus stops—a kind of do-it-yourself activism reminiscent of parents donating crayons and notebooks to public schools.)Voters in Indianapolis; Los Angeles; Seattle; Columbus, Ohio; and Charleston County, S.C., also passed tax hikes to improve public transit. And Illinois and New Jersey passed constitutional amendments mandating that revenue from fuel taxes be spent on transportation projects, as opposed to going into each state’s general funds—though this is no guarantee that transit money will be spent equitably or wisely.

But there seem to be few fans of public transit in the Trump administration or among congressional leaders. Last year’s Republican Party platform called public transit a form of “social engineering” and opposed using revenue from gas taxes on anything that does not involve moving cars around. This is short-sighted. Use of federal funding is appropriate when tackling a problem that crosses state borders; employers and businesses across the country depend on accessibility to workers and customers of all income levels. Traffic congestion hurts both the economy and the environment.

We hope that the new administration and Congress work toward transportation solutions without a bias toward roads and fossil fuels. If that does not happen, state governments, perhaps in regional partnerships, may have to assume more responsibility for ensuring that the transportation prison does not inhibit economic growth or opportunity.

The Editors
Show Comments (
3
)
Comments are automatically closed two weeks after an article's initial publication. See our comments policy for more.
Leonard Villa
5 years 7 months ago
Cars causing rising levels of pollution? What kind of pollution given the fact that all cars have to have anti-pollution devices. Public transportation can be a good thing and even a necessary reality which does not require accepting human caused global warning ideology to support. On the other hand there are public transportation boondogles like the Bullet Train to Nowhere in California. One caution: Laudato Si is also against air conditioning! Not everything contained therein is gold.
ed gleason
5 years 7 months ago
San Francisco Muni allows the over sixty-five with income levels [under 88K a year for a household of 2 ] a free Clipper card for its ubiquitous service. . Since the over sixty-five are most unlikely to travel on the rush hours, the real cost to Muni is very low. Another reason suburbs are becoming a less attractive place for the elderly.
James Schwarzwalder
5 years 7 months ago
It is very encouraging that the editors took notice of the need to plan and fund public transportation. The weakness of transit and commuter railroad is that it must be built for peak conditions and for many hours the system is underutilized Also it is labor intensive. Drivers of automobiles provide "free labor". Trucks and cars share the same highway whereas subways do not share their rights of way in most cases. Given the vast sections of America where transit is not cost effective, it is no surprise that the national Republican Party is not "pro transit." That does not mean that the Republican Party is right on this topic. Metropolitan Planning Organizations (MPO's) and State governments and transit agencies are best suited to plan and/or operate transit. Funding is another matter. Federal help is needed in funding transit. It seems the more distant a state is from Washington D.C. the more likely the public is to vote for a sales tax to support transit. The northeast in particular has the legacy of many commuter rail lines & subways and an aversion to enacting regional sales taxes to support transit. While Donald Trump may travel on his own jet and in limousines, he of all people knows how important subways are to creating high density. compact development that allows the masses to move around without cars. The key is to tax "value" that high quality transit provides to adjacent landowners. One point of contention is that the Obama Administration should have picked up and run with the Gateway Tunnel Project to Penn Station NY when Governor Christie bailed out of a poorly conceived ARC Tunnel project to/from Macy's basement. The Gateway Tunnel Project is interstate commerce and Amtrak owns the rights of way and Penn Station. A missed opportunity. Oh well, New York and New Jersey voted for Hillary so I guess it was OK for the Obama Administration to stick it to the commuters. The Metro situation in the D.C. area is becoming a national disgrace. Regarding current and future land use in cities and first generation suburbs, good quality schools, safe neighborhoods, and a lack of drug crimes and shootings rank higher than a short commute to work for most folks. High property taxes in cities also discourages reinvestment except for "bubble" locations like Brooklyn. Finally I'm still scratching my head trying to figure out why my federal taxes are paying for free birth control pills for the masses and not free transit fares. Personal responsibility I guess is in the eye of the beholder..