The election made us hate each other—is Star Wars our only hope? 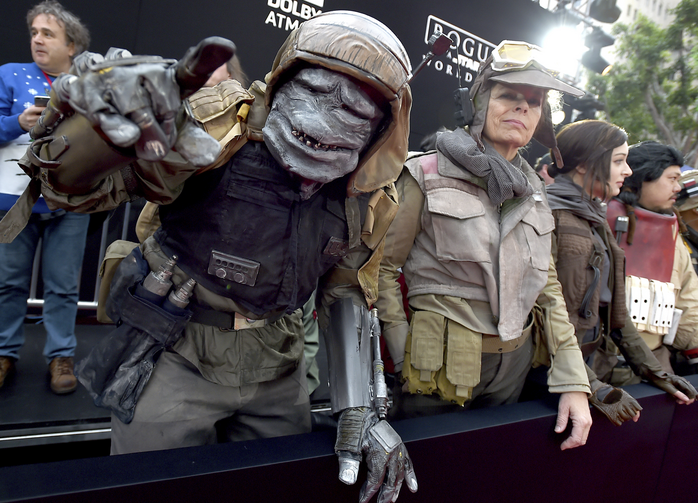 If you are one of the millions planning this weekend to see “Rogue One: A Star Wars Story”—a.k.a. “Let’s watch Disney take one line of the opening scrawl of a 40-year-old movie and weave it into gold”—here is something to consider as you take your seat. It is as likely as not that the guy next to you (sitting with three kids wearing the coolest homemade stormtrooper helmets ever), or the middle-aged couple behind you in the vintage Star Wars T-shirts or the sweet-looking elderly Asian couple down in front, voted for Donald J. Trump. Or, on the flip side, the guy thinks members of the Electoral College should not cast their votes for Mr. Trump this weekend.

Now, if we’re being a stickler for details it is more like a 20 percent chance of either scenario, given the number of people who did not vote, could not vote or thought this was the election to be a comedian and vote for Harambe. (By the way, the report that Harambe received upward of 14,000 write-in votes nationwide appears to be yet another fake news story. Thanks always and forever, internets!)

Still, none of our intense political and social divisions are going to matter come Thursday at midnight (with the apparent exception of a bunch of Neo-Nazis on Reddit). We are all going to sit there, excited as kids on Christmas and pinching ourselves that somehow we have the good luck to live at a time when we get two Star Wars films in just one year.

How can this be? How can “they” identify with “our” story, the story, and still support Trump/Clinton/Jill Stein/dead zoo animals/whatever?

It is a question that has been bothering me since the election. As both a Catholic priest and a writer, I know that stories have the capacity to move people and to change hearts, to create empathy, courage and momentum where there was none previously. Some such stories, like “Star Wars” or the Harry Potter novels, have become a kind of secular set of scriptures for people around the world. People turn to them not just for entertainment but for insight and inspiration.

When it comes to “Star Wars,” I would count myself among them (having once shaved my head as a working Jesuit specifically so that I could be Darth Maul for Halloween). Which is why the idea that the guy seated beside me tomorrow night who offers me some Raisinettes—the Champagne of movie snacks—might have voted for Trump is so hard to swallow. “Star Wars” is the story of people fighting for their lives against oppression, against lies veiled in half-truth and brutal authoritarianism, and against the casual destruction of entire peoples/races/Wookies. If that is not an apt description of what many Americans think they are seeing right now, if “Star Wars” isn’t an expression of both their fears and hope beyond hope, I don’t know what is.

Then again, put ever so slightly differently, “Star Wars” is the story of a bunch of people on the margins who feel lost in, and unjustly demeaned by, the bureaucracy and inhumanity of their government. Which is exactly what many Trump supporters (and also Sanders supporters) were saying before the election: that their government had forgotten about them, and they vehemently opposed anything that looked like a return to politics as usual.

It is strange but true: while I may find in “Rogue One” an expression of the struggle and courage I think many of us will need in the coming years, others might see in the same story a fantastic mirror of the rebellion they have just successfully achieved. The Clintons are gone for good; the political and journalistic establishments lie in ruins. Finally, we will have change.

Are those who read the film that way wrong? Am I? I suspect that is exactly the wrong question. It misses the key point: we all identify with the put-upon rebels, the mistreated outsiders, the admirable underdogs. Beyond the politics of the moment, on a visceral level many of us seem to understand ourselves in the same way.

What would our conversations with one another look like, if they began from an acknowledgement of that apparent shared truth? How would matters in our country proceed if we all realized that everyone around us, no matter their political position, also saw themselves as outsiders and rebels, as people fighting oppression and injustice? As, in other words, pretty similar to ourselves?

Maybe it would not change anything. Maybe I’m wrong and most Trump supporters actually prefer “Star Trek” to “Star Wars.” (Probably not, as that’s just crazy talk. #VulcansRLosers. But anything is possible.)

It is certainly an interesting thought experiment, as you walk through the supermarket, sit in traffic or arrange your pizza, jumbo soda, popcorn and hot dog at the movies this weekend, to consider all those around you and, instead of saying, “Some of these bozos supported so-and-so,” to discover what it feels like to say they all see themselves as rebels too.

@PopCulturPriest
Show Comments (
2
)
Comments are automatically closed two weeks after an article's initial publication. See our comments policy for more.
Lisa Weber
4 years 7 months ago
I do not worry much about who supported Trump, though I do find it incredible that so many could ignore the obvious in order to see something good in him. It is useful to keep in mind that Russia did a lot to influence this election with lies and distractions. Stories matter. Stories teach. But if this is the second Star Wars movie in a year, the first one failed to teach much of anything crucial.
Maolsheachlann Ceallaigh
4 years 6 months ago
Hi Father, thanks for this article. I live in Ireland so I didn't vote for either candidate. However I was very much cheering for Donald Trump on election night, for a reason you came close to identifying in this article; he may not be perfect, but I see him as a defender of national sovereignty against globalization. (Something which, in my view, is entirely consistent with the Catholic doctrine of subsidiarity.) This is the same reason I was cheering for Brexit and I would love Ireland to leave the EU. I saw Rogue One last night. I was so struck by the fact that the film seemed like an anti-globalization allegory that I went looking for articles on this subject. I'm well aware that the writers did not have this in mind and were in fact anti-Trump. It hardly seems a stretch to see the rebel alliance as anti-globalization parties (populist parties, if you will) uniting against a Galactic Empire of supranational institutions and liberal elites. I didn't think I'd ever be registering for an account on America's website, but I wanted to comment here, as you were one of only two articles that picked up on this. Yes, I do prefer Star Trek to Star Wars, because it is more cerebral and ideas based. I have never been the biggest Star Wars fan, though I've seen most of the movies and I do understand the appeal. I found this one by far the best of the entire series. I'm encouraged to read this article, where a writer whose sympathies were elsewhere offers some understanding as to how Trump supporters must feel. For decades, liberal and globalist elites have been setting the agenda all over the world, and Clinton seemed like their heir apparent, and unstoppable. Trump had to beat fifteen other Republican candidates and come back from a deficit in the opinion polls which seemed impossible. Isn't this very similar to the odds faced by the rebels in the movie? Peace to you, Father, and God bless you for seeking to understand those who think differently. Truly stories can help us understand one another. I am also a practicing Catholic.