It's time for Catholics to reassess how we engage in politics. 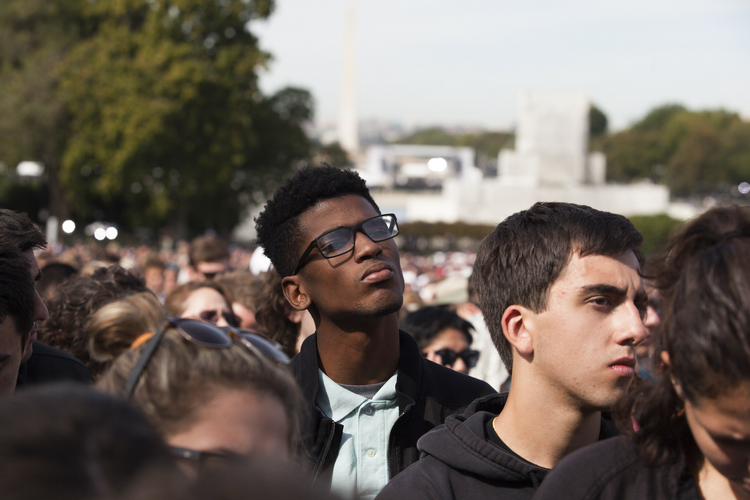 People watch Pope Francis give a blessing from a balcony of the U.S. Capitol in Washington Sept. 24. (CNS photo/Rick Musacchio, Tennessee Register)

I followed the returns on election night from a hotel room in Barcelona. As the evening evolved (or devolved, depending on one’s perspective), it was increasingly clear that a huge swath of voters was sending a powerful message to another huge swath in the only way it now could: through the blunt instrument of the ballot box. In those halcyon though still imperfect pre-Google days of American politicking, such messages were also exchanged before the balloting through reasoned public debate, informed by objective data, established by universally credible sources. This was known as public discourse. And it is very nearly gone.

Some Spaniards told me that looking at the United States from abroad, it seems that politics has become our national pastime, our principle social and cultural pursuit. But it is a politics without argument, I replied, which is the most dangerous kind of politics. While it might seem as if we were engaged in a vigorous public argument for the past 20 months about the direction of our country, what this election actually revealed was the extent to which public argument, in the truest sense of the term, is nearly impossible in the current American political climate.

The theologian John Courtney Murray, S.J., reminded us that “disagreement and argument are rare achievements, and most of what is called disagreement and argument is simply confusion.” An argument, in the classical sense, requires allegiance to a shared set of principles, as well as general agreement about the data of experience or, to put it more simply, the facts of the matter. Yet the partisans who now command our attention claim a right not only to their own opinions but to their own facts. This is a consequence of the overpowering and destructive influence of post-factual ideological partisanship, which has reduced public discourse to a street fight in which victory has displaced the common good as the ultimate end. Yet the common good is something to which we can all aspire, while victory obviously is not. “Victory is a myth,” David Neuhaus, S.J., recently told America: “The idea that you can be victorious gets in the way of pulling down the walls. And when we speak as church of pulling down the walls, we are speaking first of a process that we must undergo.” In other words, prescinding from the fact that neither political party represents the totality of a Catholic social worldview, and that Catholics who are committed to that totality are politically homeless, the crisis in our public discourse is so profound and poses such a clear and present danger to the body politic that Catholics must fundamentally reassess our public engagement. We must ask how we have been complicit in the demise of public discourse and what distinct and essentially Catholic contribution we can make to fixing it.

Now is the time not to rebut but to reframe the question. We must ask not what our country can do for us but what it is doing to us and what we can do for it in turn. It starts by remembering, as William T. Cavanaugh has observed, that there is more to the church’s public witness than the tired quadrennial debate about whom we can vote for. Such questions, while important, are mere politics. Yet if our democracy is to survive and prosper, then our politics must become less important. It must yield to public argument about the ends of our common existence rather than the mere means. Make no mistake: The end of true public argument presents a profound crisis for democracy, a greater threat to the health of the body politic than that posed by the worst of the policy proposals of either major party.