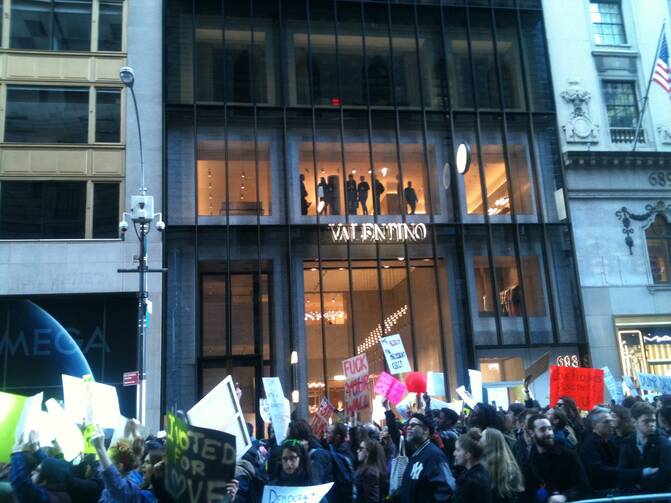 Thousands of protesters march up Fifth Avenue toward Trump Tower on the Saturday following the presidential election. (Photo by Robert David Sullivan)

The new normal on New York’s Fifth Avenue, at least the part that hosts one of the swankiest shopping districts in the world, may be waist-high metal barricades along the sidewalks and police officers urging tourists, protesters and weary residents alike to keep moving. Trump Tower, a block and a half from America’s offices and five blocks north of St. Patrick’s Cathedral, is now the home of the president-elect and the focal point of opposition to him. Donald J. Trump got only 9.9 percent of the vote in Manhattan, so there is no shortage of residents willing to register their objections even as the temperatures begin to fall here.

So far the biggest protests have come last Wednesday night and last Saturday afternoon. In the first case, the crowd shut down traffic on several blocks near Trump Tower, spilling into the street and surrounding buses and taxicabs (whose drivers could only sit back and watch the show). On Saturday, the police were ready for a march that came up Fifth Avenue from Union Square—The New York Times gave up on trying to estimate its size, only saying that it included “thousands,” though that number would describe tourists hoping to see someone famous outside Radio City Music Hall on any given Saturday.

“We reject the president-elect” has been the most popular chant of the week, along with “Not my president.” Another standard: “Donald Trump, go away, racist, sexist, anti-gay!” On Saturday, “Our bodies, our choice,” was a frequent chant; ironically, the Democratic Party’s lack of outreach to pro-life voters may have been a major reason for Hillary Clinton losing several Midwestern states and thus the Electoral College. “Global warming is real” and “Say it loud, say it clear, refugees are welcome here” were among the chants that may have resonated more with Catholic voters who agreed with some of Pope Francis’ statements indirectly referencing issues discussed in this year’s campaign.

On Saturday, the chants were generally started by organizers with bullhorns, but the more spontaneous march on Wednesday got more creative—“You can’t build the wall, your hands are too small”—but also more vulgar, with frequent chants of “F--- Trump!” In the coming weeks, organizers of the anti-Trump demonstrations in major cities will have to decide how these scenes are playing in the rest of the nation and how to, if possible, keep from appearing merely anarchistic.

At least in New York, the protests have been almost entirely peaceful, and the police have shown little hostility toward the crowds, carefully opening and closing barricades to let people through (such as, on Saturday, an older woman who said she needed to make a train at Grand Central Station). It is possible that overtime pay is helping to offset any frustration at having to beef up security near Trump Tower. But retailers such as Tiffany and Louis Vuitton may not be as patient—CBS quoted an employee at Giorgio Armani Boutique as saying sales were “tragic” last Wednesday. President-elect Trump has said he would like to spend as much time in New York as he can, according to The Times. The Fifth Avenue retailers may want to take up a collection to send him somewhere warmer for the Christmas season.

RobertDSullivan
Show Comments (
2
)
Comments are automatically closed two weeks after an article's initial publication. See our comments policy for more.
JR Cosgrove
5 years 10 months ago
This a good example of the Left eating its own. 90% of Manhattan voted against Trump so they are the ones being inconvenienced by those who don't like Trump. Similarly in Portland, Oregon which is one of the most liberal areas in the country is having part of its downtown wrecked. The protesters should go to Lebanon or Luzerne county Pennsylvania to make their point. (My guess is that would be too dangerous and these people are not interested in getting hurt.) Also these protests are being organized by anarchist and communist organizations. People know for creating havoc with anything they touch. And where are Obama and Clinton denouncing these protesters and organizations?
ed gleason
5 years 10 months ago
Bannon and you can lead the anti- protest. Bannon has 'people' you have none,