The role of Catholics in the time of Trump 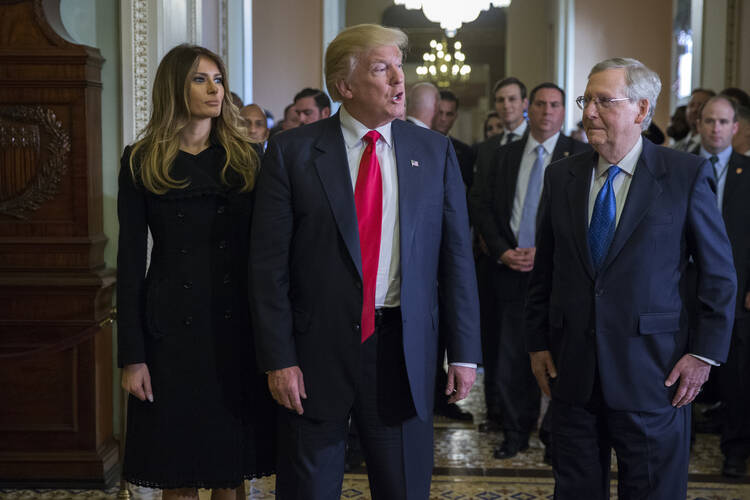 The pundits and columnists, including this one, got it wrong. A nation deeply divided by race, class, ethnicity, education and sex gave Hillary Clinton a victory in the popular vote and Donald J. Trump the presidency in the electoral college. Mr. Trump’s behavior and Mrs. Clinton’s campaign convinced most Americans that he lacked the temperament to be president. But they elected him because they did not trust her or believe she would bring change to Washington. Mr. Trump got fewer votes than Romney, but Mrs. Clinton got fewer votes among African-Americans, Latinos and young people than Obama. Donald Trump beat the Bushes, the Obamas and the Clintons and became a voice for angry and forgotten Americans. He is our president, needs our prayers and should not be underestimated.

This is the most improbable election since an elderly Jesuit from Argentina was elected pope. President Trump and Pope Francis are both improbable outsiders, but could not be more different. Francis began his papacy by calling himself a “sinner”; Trump campaigned as a “winner” who had never asked God for forgiveness. Francis brought humble ways to the papacy; Trump boasted about everything, including his predatory sexual behavior. Francis brought Syrian refugees to the Vatican; Trump promised to ban them from coming to America. Trump is a convert to Francis’ rejection of abortion but advocated the use of torture and expansion of the death penalty.

Francis came to Washington 14 months ago calling for the prioritizing of the poor and vulnerable, welcome for immigrants and care for creation. Mr. Trump will come to Washington in two months pledging to cut taxes mostly for the rich, deport immigrants and repeal environmental protections. When asked about Mr. Trump’s immigration wall, Pope Francis said Christians build bridges, not walls. After the election, Francis said, “I do not pass judgement on…politicians, I just want to understand what are the sufferings that their way of proceeding causes to the poor and the excluded.”

These conflicts challenge Catholic leadership, whether Republicans or Democrats, in different ways. If Mr. Trump keeps his commitments, bishops will not need to defend the Hyde Amendment or federal conscience clauses. However, they must protect human life and dignity in other ways if the new administration and Congress try to undermine the safety net or access to health care, reinstate torture or abandon environmental protections. Mr. Trump has demonized immigrants and refugees and called for massive deportations and bans based on religion. Archbishop Gomez offers an example of how they need to defend the lives and dignity of immigrants, refugees and Muslims as clearly as they have defended the religious freedom of the Little Sisters of the Poor.

Catholic Republicans need to ensure that Mr. Trump honors his pledges on abortion and religious liberty at home and abroad. They should resist other policies that would hurt the poor or threaten global solidarity and peace. They especially need to address the anger and vulnerability generated by a Trump campaign that fanned racial fears, scapegoated immigrants, demeaned women and won with mostly white, mostly male voters. Can they persuade their party to act on poverty and criminal justice reform, voting rights and compassionate immigration policies?

Catholic Democrats need to take on the liberal identity politics that failed to respond to the pain of working class families and a Clinton campaign that called voters “irredeemable” and rarely even said the word poor. They should make clear that a party that makes “reproductive rights” a centerpiece and overcoming poverty an afterthought does not appeal to Catholic values and hopes. Can they help their party recover its voice and refocus its priorities on workers and poor families, on environmental and economic justice over culture war issues?

All Catholics, whatever our party or ideology, should remember that the moral test of our nation is how the weakest are faring. We should recall Pope Francis’ challenge in our Capitol “to defend and preserve the dignity of your fellow citizens in the tireless and demanding pursuit of the common good.”

Show Comments (
12
)
Comments are automatically closed two weeks after an article's initial publication. See our comments policy for more.
Lisa Weber
6 years ago
We so need to quit talking about abortion as an issue that can be affected by public action. It is emotional and divisive and blinds people to other, more pertinent, realities. Donald Trump was labeled "pro-life" despite being a despicable individual only because Hillary Clinton was clearly pro-choice. Now we are stuck with president-elect who is clearly unfit for the office of the presidency because we spent our time talking about something we can do nothing about.
Maree Hutchison
6 years ago
Well said, Lisa.
Lisa Weber
6 years ago
Thank you.
L J
5 years 12 months ago
Abortion makes you sick for very good reasons. If only you were sick of abortions enough to defend life instead of defend that which makes you sick.
JR Cosgrove
6 years ago
Mr. Carr should not comment on political matters. He is an acknowledged voice for the Democratic party. So we get an anti Trump political hit piece. What would you expect? Insight. Here is an example of Mr. Carr's hypocrisy

Black Americans are hurting and living in very difficult conditions due to policies of the Democratic party of which Mr. Carr is a voice. The Democratic party has failed the test of helping the poorest amongst us for several decades. By the way, if you take away Los Angeles County, Trump and Clinton are essentially tied in the popular vote nationally.
Chuck Kotlarz
6 years ago
Would you give us an example of a state or a major city (over 250,000) where the poorest among us have done well under republican leadership?
Richard Booth
6 years ago
Great point!! My comment is above.
Anne Chapman
5 years 12 months ago
Mr. Carr should not comment on political matters Seriously? You say this about a man whose career has been devoted to public policy and advocacy on behalf of the USCCB? Could you please share with us your credentials - those that make you more qualified to comment on political matters than John Carr? . He is an acknowledged voice for the Democratic party.If John Carr is an "acknowleged" voice for the Democratic Party - acknowledged by whom? Do you also believe that the USCCB is a voice for the Democratic party? Do you believe that all Catholics must be members of the Republican party? Before joining the staff at Georgetown, Mr. Carr worked for the USCCB for 20 years. Politics were part of his job - assisting the bishops in sharing Catholic social teaching and directing their public policy and advocacy efforts on major domestic and international issues. Carr represented the Bishops’ Conference before Congress, at the Vatican, across the US and around the world. He assisted the bishops on a wide range of statements, including Faithful Citizenship, Communities of Salt and Light and documents on economic justice, health care, environment and climate change, criminal justice and the death penalty, religious liberty and war and peace.You disagree with what Mr. Carr has written. Fair enough, we all hold our own opinions. But, saying that Mr. Carr should not comment on political matter implies that you believe that anyone whose views are not congruent with your own should not comment on matters of politics and public policy.
Richard Booth
6 years ago
There is a certain kind of strangeness in the idea of a movement for change (i.e., a Trump slogan) when in the midst of a quagmire. It seems to me that to figure out the best way to get out of the quagmire is the first, most reasonable thing to do. Meaningful discernment should occur before any changes are undertaken. Promises of myriad changes may turn out to be pie in the sky unless we can effectively resolve the conflicts we are experiencing in foreign places and at home. For example, in foreign affairs we have attempted solutions via the G. W. Bush fashion of war-making and we have tried the opposite, compromise with minimal force via President Obama. We best be careful if we wish change in everything; serious, lasting solutions are often very slow in coming.
Charles Erlinger
6 years ago
Thinking about the Los Angeles County remark in the comment (below) to this article raised the possibility of creating a new board game based on the picture jigsaw puzzle model where you have a map of the United States divided into electoral precincts, with the vote totals by party printed on each precinct piece. The object of the game would be to put together as many groups of contiguous precincts as possible that, added together, have voting totals by party matching those of Los Angeles County, within, say, plus or minus one percent. The only pictorial requirement would be that each precinct within a given grouping would have to be contiguous with at least one other precinct in the grouping. The grouping itself could cross county lines and even state lines. The player who could identify the most groupings of contiguous precincts would, however, have to do one more thing in order to win. He or she would have to explain what political significance each grouping has relative to the outcome of the 2016 election. According to the reference to Los Angeles County in the comment, there must be some significance.
Richard Booth
6 years ago
Re: the comment about an urban area doing well under Republican leadership? Skip the city and take a state: Illinois. Our helping and educational systems are dissolving under Governor Rauner (R), who is actually a bottom-line businessman turned ersatz politician! Taking care of people is different from making money.
L J
5 years 12 months ago
"how the weakest are faring" is relative. Theology is not black and white nor is Catholicism. The USA ceased being a national moral leader years ago. We have lost the right to be taken seriously on anything. We are a toxic nation exporting our cancerous foods, business paradigms, culture of death and now intellectual bankruptcy. To wit, this from an alleged "Catholic" leader from Hillary's now defeated and humiliated presidential campaign: "Clinton communications director Jennifer Palmieri exclaimed "I would rather lose than win the way you guys did," to which Kellyanne Conway, Trump’s campaign manager, fumed "I can tell you are angry, but wow... Will you ever accept the election results?" And it went down-hill from there..." http://www.zerohedge.com/news/2016-12-02/clinton-trump-aides-forum-devolves-screaming-match-i-would-rather-lose-win-way-you-d I tell my Latino and European family and friends: do not look to the USA as having any answers to lead the world. With the likes of Palmieri, catholic in name only, the world should fear everything we export ...everything. May God have pity on our arrogant souls in America. We deserve everything we have coming at us and then some.