Some Catholics say politics were prevalent in parishes ahead of election 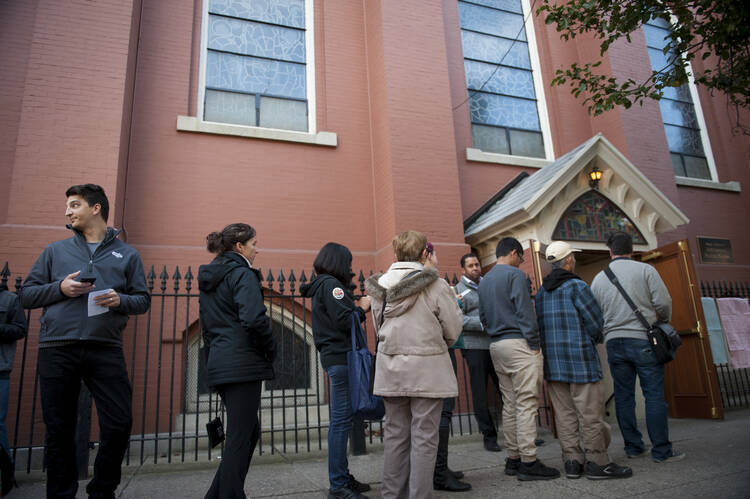 The numbers are in and a majority of Catholic voters backed the winner of Tuesday’s election, Donald J. Trump. Helping drive up those numbers, some Catholics say, were clergy and parish leaders who spent the weeks running up to the election offering support for the Republican nominee.

Perhaps the most high-profile case came in mid-October from St. Kevin’s Church in Warwick, R.I., where local media reported that the Rev. Robert L. Marciano gave a homily in which he said Hillary Clinton and Democratic leaders “hate Catholics.”

“They hate everything that we stand for and the virtues and values that we hold as sacred,” he preached, leading to an outcry from some parishioners in the Democratic-leaning state. He suggested that voting for Mrs. Clinton would put one’s soul in jeopardy “by cooperating in the destruction of innocent human life,” a reference to the candidate’s support for abortion rights.

The county where St. Kevin’s is located was the only one in Rhode Island, the most Catholic state in the nation, that voted for Mr. Trump.

While Father Marciano’s words may have been especially heated, he wasn’t alone when it came to introducing politics at the pulpit in the weeks leading up to the presidential election.

Don Powell, a Catholic in the Diocese of Orange, Calif., told America that he heard homilies on the two Sundays before the election that sounded to him like endorsements for Mr. Trump.

“The priest told us that the abortion issue superseded other issues like immigrants’ rights” and that Catholics “should never vote for a pro-choice candidate,” Mr. Powell wrote in an email.

“As a Catholic convert who came into the church because of people like Dorothy Day and Thomas Merton I can’t tell you how discouraging I found these homilies,” he continued.

A Catholic in the Archdiocese of Detroit, Stephen McKenney, said that a deacon at his church preached last Sunday that Catholics voting in the election should be concerned with only five issues, all related to life and marriage.

The deacon, Mr. McKenney recalled, said that just one candidate aligns with the church on those issues and that many of his priest friends were “voting for him”—a clear reference to Mr. Trump.

“I was pretty shocked by it,” Mr. McKenny said. He found the explanation of which issues should be of concern to Catholics incomplete and said he was “deeply troubled” with an endorsement from the pulpit.

Elsewhere, letters and voting guides were published in church bulletins ahead of Tuesday’s vote.

For example, a letter written by Bishop William Murphy of Rockville Centre, which comprises Long Island, was published in bulletins and read at Mass.

Some believe that Bishop Murphy implied in the letter that Catholics could not vote for Mrs. Clinton or her running mate, Tim Kaine, a practicing Catholic who supports abortion rights but personally accepts church teaching on abortion.

“Support of abortion by a candidate for public office, some of whom are Catholics, even if they use the fallacious and deeply offensive ‘personally opposed but . . .’ line, is reason sufficient unto itself to disqualify any and every such candidate from receiving our vote,” the letter said.

One Catholic in the diocese, who asked that her name not be used, said she and other parishioners were “taken aback” when they heard the letter read at Mass.

“It doesn't specifically name Clinton or Trump, but clearly we were being told not to vote for Clinton because of the pro-life issue,” she told America.

“I was taken aback because there really were so many issues at stake in this election, not just pro-life [issues],” she continued. “Neither candidate is perfect as far as church doctrine on any of the issues.”

Mr. Trump, who lost the state of New York, won one of the two counties that comprise the Diocese of Rockville Centre.

Karen Dombowsky, a Catholic who lives outside Denver, said her parish bulletin published a letter written by Philadelphia Archbishop Charles Chaput, in which he was critical of both candidates, referring to Mr. Trump as a “disrespecter of women” and stating that the Clinton entourage is “riddled with anti-Catholic bigots.”

“The priests from our church have referenced political issues many times over the years,” she said in an email. “I have spoken to many of my Catholic friends who are very unhappy with the discussion of politics from the pulpit and have stopped going to church.”

A Catholic in the Diocese of Trenton said that a deacon at her parish posted messages on his social media account supporting Mr. Trump and preached homilies that sounded to her like a thinly veiled endorsement of the Republican candidate.

“In the homily I heard, the deacon preached about abortion, same-sex marriage, assaults on religious liberty and pornography and reminded parishioners of our obligations as Catholics to vote for pro-life candidates,” Mary Vanderhoof wrote in an email.

She said another deacon told her daughter not to vote for Mrs. Clinton.

Politicking wasn’t exclusively in favor of Mr. Trump, according to a Catholic in the Diocese of Raleigh, N.C.

According to Angela Flynn, a priest at her parish said Catholics should consider a number of issues when voting and he offered some implicit criticism of Mr. Trump’s positions.

Political speech from religious leaders is tricky business, at least as far as the government is concerned.

Mr. Trump has promised to fight to repeal the amendment.

Then there are voting guides, which are not prohibited by I.R.S. or church regulation as long as they are part of “voter education or registration activities” and don’t endorse specific candidates.

But how the candidate’s views are presented can send not-so-subtle signals, scenarios cutting across party lines.

For example, a voting guide created earlier this year by 10 Catholic organizations highlighted issues such as poverty, the environment and immigration. While the topics were presented within a Catholic framework and included quotes from Pope Francis, pro-life critics said it did not give enough attention to church teaching on abortion or marriage.

Other Catholic voting guides have been criticized for reducing the church’s vast social teaching down to just a few issues.

The Catholic from Trenton, Ms. Vanderhoof, said one such guide was distributed at her parish. Created by the group Catholic Answers, the guide contained paragraphs on what it called “five non–negotiable issues.” They were abortion, euthanasia, embryonic stem cell research, cloning and same-sex marriage.

According to a 2014 poll, 63 percent of Americans say churches should not come out in support of a particular candidate. But the country is roughly split when it comes to houses of worship expressing views on political issues, with 49 percent of Americans agreeing they should.

In the end, some of the pro-Trump politicking may have worked. Mr. Trump did well Tuesday with Catholics overall, winning the backing of 52 percent of Catholic voters, a group President Barack Obama won in 2008 and 2012. Among white voters, support was even greater for the president-elect. Six in 10 white Catholics supported him, while just 26 percent of Hispanic Catholics voted for him.

Now that the election is over, some bishops, like such as Archbishop Joseph Kurtz, president of the U.S. Conference of Catholic Bishops, are calling for unity,.

“Some may wonder whether the country can reconcile, work together and fulfill the promise of a more perfect union,” he said in a statement following the election. “Through the hope Christ offers, I believe God will give us the strength to heal and unite.”