Editors: This election made our divisions undeniable, but politics alone won’t heal them

Editors: This election made our divisions undeniable, but politics alone won’t heal them 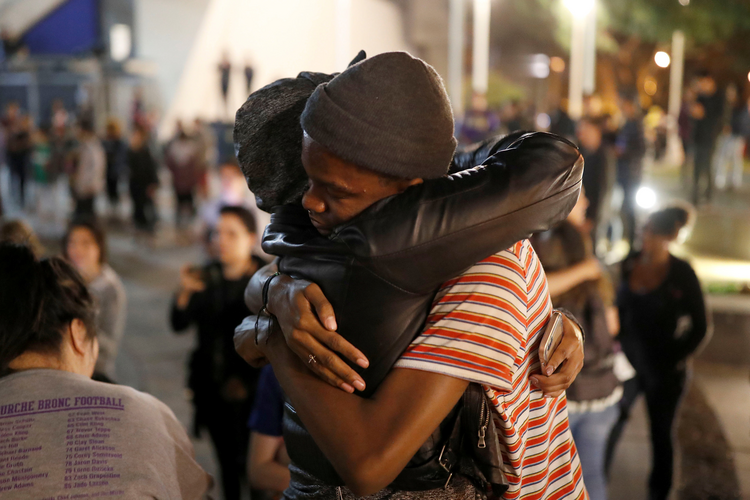 Students embrace each other in the early morning hours of Nov. 9 during a demonstration at San Francisco State University following the election of Donald Trump as president of the United States. (CNS photo/Stephen Lam, Reuters)

Above all, however, this was an election about division. While president-elect Donald J. Trump won convincingly in the Electoral College, and thus requires both our support and our prayers, the harder task still lies ahead. No one should feel complacent about the divisions this election emphasized and exploited, which run far deeper than political allegiances. Mr. Trump said in his victory speech that now was the “time for America to bind the wounds of division,” and he is right. Yet no policy proposal, whether it promises to restore the lost jobs of American manufacturing or to ensure free college for all, will be enough to bridge those rifts. No political figure can now command enough allegiance or respect.

Nor are careful analysis and understanding of these issues sufficient to the task. There is no easy replacement for actual solidarity with others. The geographic, socioeconomic and communication bubbles that too often pass for civic life in modern America have not provided that solidarity and indeed have often worked against it.

As Pope Francis has consistently reminded the church and the world, it is the poor who disproportionately bear the costs of division and inequity. It is the poor, both on our doorstep and around the world, who are most invisible and easiest to ignore when concerns over economic stagnation tempt us to limit our compassion. And as those limits become walls that “close in some and exclude others,” as the pope said recently, we will discover that those who are excluded, whether because of race, nationality or class, are almost always far poorer than the ones raising the barriers.

The poor are on the other side when the barrier is a wall closing off the United States from Mexico. But poor people are also on the other side of the various barriers that divide the financial, governmental, educational and media elites from the rest of the country.

Neither economic stagnation nor the disconnect of the elites tells the whole story. This election was also starkly divided along racial and geographic lines, with suburban and rural areas and whites voting for Donald Trump while minorities and large urban centers voted for Hillary Clinton. Another way to read this election is to look at which constituencies the parties chose to write off. Mr. Trump ignored minority and urban voters and focused instead on Rust Belt states in the Midwest. Mrs. Clinton, following today’s conventional political wisdom, worked on increasing turnout among her base while ceding white, non-college-educated voters to Mr. Trump.

The fact that Mr. Trump’s strategy was successful while Mrs. Clinton’s failed does not give legitimacy to either. Neither strategy transcended a politics of division, while Mr. Trump’s added resentment to the mix as well. Both perpetuated the divisions from which the country suffers while doing nothing to reconcile them.

Recognizing these divisions should prompt a national examination of conscience. Republicans, while holding both houses of Congress and the presidency, must ask what they owe to the apparent slim plurality of the electorate that voted for Mrs. Clinton; they must also determine how to encourage Mr. Trump to ameliorate, rather than exploit those divisions. Democrats, recognizing that their party’s concentrated base has isolated them from the concerns of huge swaths of the country, must consider how to prioritize those voters’ concerns alongside other issues. Leaders across society must broaden the range of people to whom they listen and with whom they speak.

The church has an important role to play as the next four years of Mr. Trump’s presidency unfold. It must offer clear and vigorous moral guidance, not limiting itself to the anti-abortion promises to which Mr. Trump must be held but also speaking on issues of immigration, racial discrimination, international peace and social welfare. The church must stand firm in rejecting any return to the insults, misogyny and devaluation of human dignity that characterized much of Mr. Trump’s campaign rhetoric. The church must also offer the wisdom of Catholic social teaching to help shape proposals for addressing legitimate concerns about economic stagnation among those globalization has left behind without scapegoating the poor and retreating into isolationism and xenophobia.

Even more than its public moral witness, the church must encourage Catholics to find practical solidarity with their political opponents, sharing worship and conversation and the works of mercy. That is both more difficult and more costly than simply adopting better political positions, but it offers a hope of reconciliation, not merely the prospect of electoral victory.

Show Comments (
19
)
Comments are automatically closed two weeks after an article's initial publication. See our comments policy for more.
Lisa Weber
3 years 10 months ago
If the Church honestly worked to include women in its leadership, it would at least offer a good example of governance that includes women. When the Church fails to lead by example, it gives a message of "Do as I say, not as I do." That message is a ineffective with society as it is with children.
Nicholas Clifford
3 years 10 months ago
The church's continuing fear of women is one of the great mysteries of the modern world. It's not only unChristian, but irrational. Would the sex abuse crisis have spiraled as out of control and driven so many people away from the church if a few intelligent and charitable women had been in positions of authority in the institution's governance structures? But then consider the question of subsidiarity. A wonderful idea, an important part of Catholic Social Teaching, we are told. Wonderful, that is, everywhere bit in the Vatican and in the structures of ecclesiastical authority. Subsidiarity has no place in the church, and it is up to us to get that truth through our thick heads and not raise awkward questions.
Bruce Snowden
3 years 10 months ago
In 1960 when JFK ran for the Presidency his "I'll dos" were many and reporters like elephants have good memories. Some months later one of them asked President Kennedy about some of the things Candidate Kennedy said he would do if elected. His response was, "The Presidency is a sobering experience!" Now that he's got the job Trump, will also like JFK, recognize that reality and shed his bombast and get back to the "real world." I sure hope so, also hoping that he will stand firm in his expressed strong pro life attitude. That certainly was a saving grace and I think a main reason why Catholics like me could vote for him and not Hilary, although I would love to have voted into the Presidency a woman, long overdue!
JR Cosgrove
3 years 10 months ago

This was an election about race and gender. All of these statements are true.

This article also appeared in print, under the headline “Solidarity Now,” in the November 28, 2016, issue.