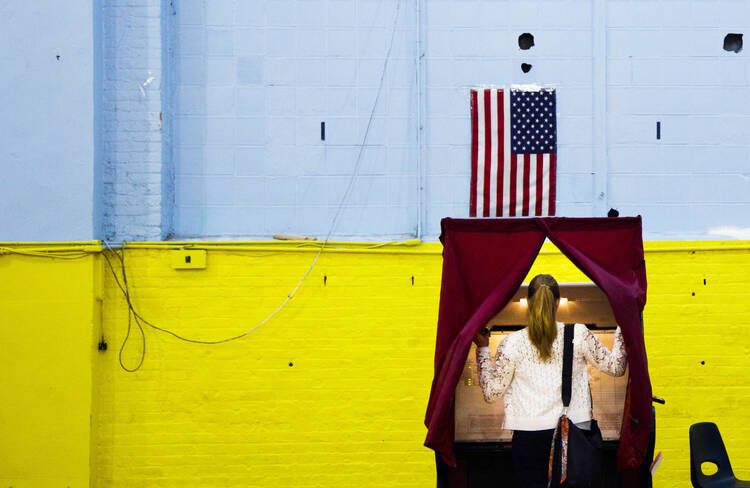 Last week at America, the editorial team was talking about how this year’s polarizing election has pushed many key issues to the sidelines. The disappointing presidential debates—which involved a lot more cross-talk, voice-raising and snide takedowns than actual debate—were a case in point. With the election coming to a close, we decided to see if our frustration was shared by America readers.

On social media, we posed a question to you: What is the most important issue for Catholics that neither major-party presidential candidate is talking about?

We received answers from coast to coast (and Hawaii). The most common response, from 28 percent of respondents (see chart below), was disappointment that the candidates have neglected to focus on impoverished Americans, especially in rural areas, preferring instead to concentrate on the challenges facing the middle class. Michael Morrone, from Mississippi, raised this point: “Not a single mention has been made of those millions who will still be at the bottom regardless of economic growth.”
RELATED: A Facebook Live discussion of the America election poll
A woman from Ohio named poverty as her foremost concern because of her experience as a pediatrician in a rural area. “I see children who fall through the cracks, and our current methods of addressing those issues (education reform, etc.) aren't addressing the core problems of the cycle of poverty,” she wrote. “These problems are worsening, and our ways of addressing them are inadequate. I desperately wish the church would focus more on this issue.”
Closely following poverty in our poll was the environment, highlighted in 24 percent of our readers’ votes. Neither candidate has spoken much on this topic, except to argue whether the environment is a significant concern at all. (In 2012 Donald J. Trump wrote on Twitter that climate change was a hoax engineered by China; Hillary Clinton devoted a page on her campaign website to the “threat” of climate change, calling it “a defining challenge of our time.”)
Most of our reader responses on this subject referred to Pope Francis’s encyclical “Laudato Si’,” including Alina Sierra-Sedlander of Louisiana. “Global warming and the environment are essential issues not only for our nation but for the entire world,” Ms. Sierra-Sedlander wrote. “The leader of the free world has to play a major role in averting the environmental disaster in our future. Our Holy Father has addressed the environment as a temporal and spiritual problem.”
Though poverty and the environment stood out as the leading topics of discussion, some of the answers were not confined to one or the other. Speaking about the environment, Marsha Speth, S.P., of Indiana highlighted the fact that “those most affected by environmental change already are the poor and marginalized.”
Several readers emphasized the environment as a key Catholic issue, but as part of right-to-life issues—a category that comprised about 13 percent of all answers. These readers mentioned the environment but also expressed a desire for more attention to abortion, poverty, euthanasia and the death penalty. “[Being] pro-life is so much more than [being] anti-abortion,” Susan Rogan from Michigan wrote.
The understanding that these concerns can be connected was characteristic of almost all of our readers’ answers, and indicative of their reflectiveness. As Anthony Giancatarino from Pennsylvania said, “The nexus of racial, social and climate justice issues receive far too little substantive focus.”
Since I edit “Reply All” for America, I read all the letters and social media comments each week, and so I would like to think I am well attuned to our readership’s concerns. But these hundreds of detailed answers to our poll question highlighted how thoughtful and socially concerned our community of readers is. Thank you for taking the time to write to us.

Eloise Blondiau is an editorial assistant for America.

@eloiseblondiau
Show Comments (
1
)
Comments are automatically closed two weeks after an article's initial publication. See our comments policy for more.
Vincent Gaglione
5 years 9 months ago
You indicate that the survey went out on “social” media but no description is provided as to what “social media” means. I don’t recall seeing any survey questions on this website which doesn’t mean that they weren’t there. However, if only “social media” were used, you ignored lots of older folk like myself who do not engage in “social media.” Your survey elicited a memory for me. Some months ago a parish priest in his homily broadly and generically stated something to the effect that USA policies do not reflect God’s plans. He never provided any specifics as to what his statement meant. He didn’t provide any specifics about what God’s plans for the nation are! That sums up my complaint, actually. I never hear from local religious leaders exactly what they mean. They always talk in general terms. Help the poor, they say. And leave it at that, with a plug for some local or archdiocesan appeal, as if the issues of poverty only get solved that way. Be good stewards of the environment, they say. And leave it at that, with no specifics as to what stewardship should require from us. So, while many of your survey respondents spoke to specific issues that weren’t addressed by the candidates in the Presidential campaign rhetoric, I wouldn’t mind seeing a similar survey of the same about our own religious leaders and parish priests and nuns. This was a survey seeing the splinters in others’ eyes and ignoring the logs in our own!