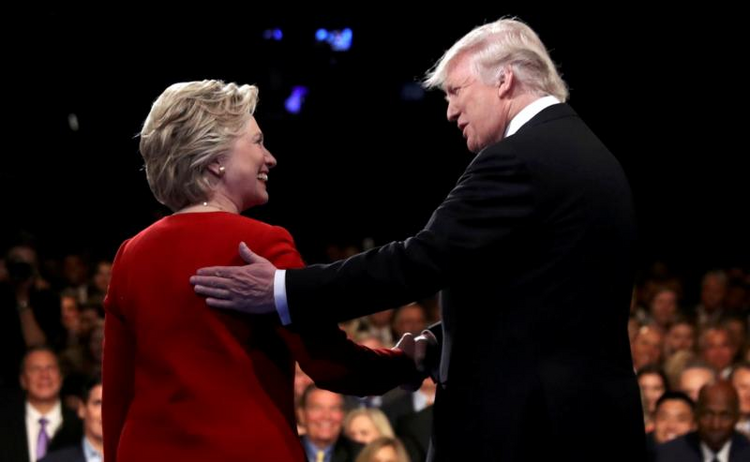 Catholics are giving a decided edge to Hillary Clinton, as she has a 5-to-4 margin over Donald Trump, according to a new poll released on Oct. 31 at a news conference at the National Press Club.

Hispanic Catholics and white women are helping Clinton make these gains, said the poll results, released by the Public Religion Research Institute in conjunction with the Institute for Policy Research & Catholic Studies at The Catholic University of America in Washington.

Clinton, the Democratic nominee, got support from 51 percent of Catholics compared to 40 percent for Donald Trump, the Republican nominee. This compares to a much closer 50 percent-48 percent advantage Catholics gave to President Barack Obama over GOP challenger Mitt Romney four years ago in Obama's re-election bid.

That Republicans are trailing so badly among Hispanics should come as no surprise, said Maria Teresa Kumar, founding president of Voto Latino, when in 2012 "you talk self-deportation"—a Romney position on immigration—and in 2016 "you're talking about their families ... and then you start talking about building a wall." Trump made headlines on the campaign trail with his remarks that immigrants who are entering the country without legal permission are "bringing drugs, they're bringing crime, they're rapists," and about building a wall to stop such border crossings and make Mexico pay for it.

Jones said white Catholics' overall support for Trump did not vary much by age, as Catholics ages 18-49 favored him 49 percent to 40 percent for Clinton, while those 50 and over chose Trump 47 percent to 41 percent for Clinton. He attributed the lack of difference to the church's "loss of the young people, who are generally more liberal." Jones said this trend also can be spotted among white evangelical Christians.

The bigger difference, according to the poll, comes in gender. White Catholic men back Trump 58 percent to 33 percent for Hillary, but white Catholic women support Clinton 49 percent with 38 percent for Trump. "A gender gap in vote preference is evident across religious groups," said the poll, titled "The 2016 Religion Vote." But "white Catholic voters have a much more pronounced gender gap," it said.

The numbers for this new poll were aggregated from four separate PRRI polls conducted Sept. 22-Oct. 17. The time frame includes the leaking by NBC of a recording of lewd comments made by Trump off camera in 2005 that were picked up by a "hot mic" before a TV interview. The time period does not include the third presidential debate or the FBI announcement Oct. 28 that it was conducting a further investigation into Clinton's emails being on an unauthorized computer when she was secretary of state.

Washington Post columnist E.J. Dionne reiterated a conviction he said he has long held: "There is no 'Catholic vote'—and it's important."

Catholics make up a bit over one-fifth of the electorate. However, their numbers are stronger in Pennsylvania and Wisconsin, where they are about one-third of all voters, Dionne said. Catholics also make up about one-fourth of all voters in Florida, Arizona, Nevada and Ohio. All of these states were being hotly contested in the campaign's final days.

Dionne, though, broke it down into "social renewal Catholics" for whom life issues are paramount and "social justice Catholics" who focus more on Catholic social teaching. The differences are real, he said. "You see this right at the parish level all over the country. There are differences" in how the Gospel mandate is interpreted, Dionne added.

Mark Pattison - Catholic News Service
Show Comments (
14
)
Comments are automatically closed two weeks after an article's initial publication. See our comments policy for more.
William Schaeffer
4 years 10 months ago
The Supreme Court, the appointment of federal judges, Obamacare, religious freedom, taxpayer dollars for Planned Parenthood, the fate of the Little Sisters of the Poor and the diminished economy are all reasons for Catholics to reconsider their intention to vote for Hilary Clinton.
Chuck Kotlarz
4 years 10 months ago
William, are you familiar with either the Clinton or Trump tax proposals? Do you perhaps have comments to post?
James Sullivan
4 years 10 months ago
In my humble opinion Trump is a PROUD racist and misogynist to the core. I hate abortion but I support Planned Parenthood - I think the Little Sisters of the Poor can take care of themselves- I'm with her.
Stuart Bintner
4 years 10 months ago
As a white male who considers Trump to be closely aligned with the forces of evil, I will vote for Clinton--while not falling into the demographic described. I can sense evil, and differentiate it from misguided, when I see it.
Martha Murray
4 years 10 months ago
The IBD/TIPP daily tracking poll now shows the Catholic vote is Trumps by double digits. Practicing Catholics lean conservative and are definitely opposed to late term abortion. If Clinton loses, it will be largely due to the Catholics and her extreme views on abortion. In the end hopefully good conscious will prevail over the evil of abortion.
Falkoyn el Norte
4 years 10 months ago
The Catholic edge in voters for The Left's candidate over the Centrist candidate, is quite telling. I am a little concerned with all of the revelations put forth into the World media stream about her, lately. If she is even 1/10th as corrupt as it appears, I wonder why there are people in the Church who would support her at all.
Maree Hutchison
4 years 10 months ago
I'm an Australian. Perhaps a citizen of another country should not comment on a US election. But the leadership of the most powerful nation, the United States, is of huge significance to the rest of the world....including Australia. First, many of Donald Trump's policies and beliefs would be detrimental to Australia, especially in our position in the Asian region, and also in his ignorance of the science relating to climate change. . Second, Donald Trump's personal behaviour is appalling and not up to the standard of the civility and fairness that we have respected in US public life. His comments and behaviours have been brutally sexist, racist and frankly bullying of vulnerable people who lack power. I'm Catholic and cannot understand how a Catholic could consider voting for this man.
JR Cosgrove
4 years 10 months ago
Maree, My experience is that most Americans and nearly all non-Americans do not understand what is going on in the United States. A large percentage of Americans believe Trump is a disastrous choice for president but that Hillary is far worse. So what is one to do? It would take pages and pages to explain but you should not trust the popular press to present anything that is unbiased. Almost nobody in the US believes the press any more. They all distort their reporting to fit what is called a "narrative." It will be interesting to see what happens but few believe it will be good no matter who wins.

I'm Catholic and cannot understand how a Catholic could consider voting for this man.