I never imagined I would end up in prison, but I wanted to learn

I never imagined I would end up in prison, but I wanted to learn 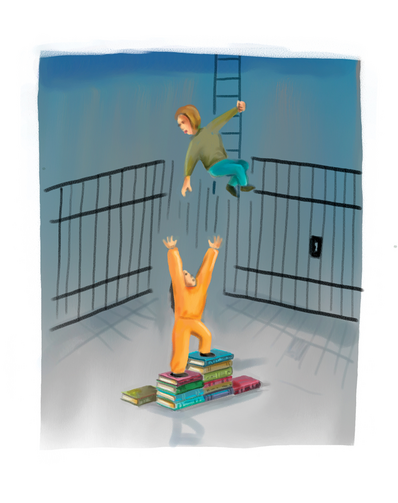 I never imagined that I would end up in prison. I was in Baylor Women’s Correctional Institution as part of a year-long volunteer program with the Franciscan Volunteer Ministry. I tutored in adult basic education and taught creative writing.

Before working at Baylor, I was a little scared of inmates. I thought, Will I meet a murderer? Teach a murderer? It seemed so foreign, so far beyond my capacity for understanding. When I started volunteering, I discovered that while I knew which women were in higher or lower security wards, I did not know why they were incarcerated. And it didn’t really matter. After all, I was helping these women with basic reading comprehension skills and elementary school level math, and helping them discover the power and freedom that can be found in the written word. My initial nagging questions about what they were in for were soon replaced by a desire to deepen my understanding of who they were.

The women of Baylor wanted to learn, move forward and create a positive life for themselves and their children. Some wanted to get their G.E.D. certificate, a better job, higher education, culinary certification or money management skills. Others sought a more personally transformative goal: learning how to form a healthy romantic relationship or how to be confidently single. Nearly all wanted their children to go to college; all hoped their own children would never be in prison.

I wanted to learn, too. The women also had difficult backgrounds that directly led to their incarceration. Many of the women or their siblings had been born in prison—they were known as “Baylor Babies.” I learned that in many cases the education system had failed these women. During a nutrition lesson, one woman raised her hand to ask for clarification: “So. You’re saying that it’s not good for kids to eat Cap’n Crunch for three meals a day? That’s what my mom did for us, and we loved it. That’s what I do for my kids, and they love it. You’re telling me I shouldn’t have done that?” How, I asked myself, could we as a society expect someone who didn’t know how to make proper nutrition decisions to make productive life choices?

I learned that our supposedly multicultural 21st-century society has not progressed much beyond the white standard of beauty depicted in The Bluest Eye. When one woman kept questioning me about what hair products I used, another responded to her, saying: “It doesn’t matter if you do what she does. Even if her hair is curly, she’s white, so her hair is always going to be nicer. Feel it if you don’t believe me.”

I learned the meaning of the phrase “summer teeth”: Some are there, some are missing. I discovered that it is a major faux pas to read a newspaper lying on a table—that newspaper belongs to someone, and only after you have asked her permission is it acceptable to read it. I found out that the fact that I didn’t consider macaroni and cheese a Thanksgiving staple was undeniable proof that I was white, perhaps more proof than the color of my skin. This revelation prompted the frequent discussion of my diet, which usually ended with: “White girl, you don’t know how to eat. Just wait ’til I get out and make you some soul food.” I realized that in a matter of days and without any tangible cause I had evolved from being someone “you should watch out for” to being that “sweet white girl with the curly hair who will help you.” I learned that the musical “Chicago” was more factual than I previously guessed: Women respond to unfaithful men in some violent and, at times, creative ways.

At times I felt guilty for the disparity between our lives. It made me slightly uncomfortable to explain what it was like to go through airport security, the phenomenon of YouTube or what calamari is. Their questions were based on a pure desire to learn and understand things they had heard about, but it was unnerving to be the authority on facets of life that I had considered commonplace.

When people, strangers and friends alike, asked where I was working, I continued to be surprised and a bit defensive toward their reactions. “God bless you.” “Prisoners! What’s wrong with teaching kids?” “I hope you have a security guard with you at all times.” These well-intentioned responses made clear the chasm between our worlds. I could guarantee that the speakers weren’t imagining the women I knew, women who sang along to John Denver or got excited about marshmallow fluff. Yet, as much as it frustrated me that others would have such a negative view of “my women,” I had been in a similar place just weeks earlier. There was an inherent sense of fear of an unknown group. Ironically, my women left our final creative writing class in tears, saying, “You be careful next year, when you’re teaching teenagers.”

There is a legend that in the 13th century a wolf was terrorizing the small city of Gubbio in Italy. Townspeople were being killed; people were too terrified to leave their homes. The solution to this ordeal was found by St. Francis of Assisi. According to tradition, Francis spoke with the wolf, and they arrived at an agreement: The wolf would stop attacking the locals, and in exchange, the citizens would provide him with food.

While some claim this is a historic account, most view it as an allegory for Francis’ mission. The misunderstood outsider is not tamed with swords or chains but instead is met with love and compassion. Francis’ model is one that resonates 800 years later in cultures across the globe. Service, humility, compassion—these are the foundations to reform society. Upon entering Franciscan Volunteer Ministry, it was a story we had learned, a story that helped focus our mission of humbly serving for the year.

During a group meeting for spiritual direction near the end of my volunteer year, I sat with my journal open, sipped hot chocolate and reflected on the story of the wolf of Gubbio. My spiritual director prompted this musing by asking my community members and me, “Who was your ‘wolf of Gubbio’ this year?”

It was a striking question, and the response to it was spoken deep within me before I could even understand my reasons. The names of three women who had each murdered someone immediately came to mind. These women were the “wolves.” I had entered Baylor fearing and not understanding these women. But, like Francis, I learned to love and appreciate them. I stepped outside my comfort zone and realized I had been mistaken. These women were not just the crimes they had committed. The women of Baylor were, like so many of us outside prison walls, misunderstood, lonely, abused people.

Seven years later, as I reflect on my time in Franciscan Volunteer Ministry, I pray that I consciously remember to be more open-minded. I pray that I open my heart to those we are inclined to label “wolves,” who are so often the world’s most vulnerable and marginalized.

This article also appeared in print, under the headline “The Women of Baylor,” in the November 7, 2016, issue.

Kelly Donnelly is a high school English and religion teacher at a Catholic school and director of youth ministry for the Diocese of Ogdensburg, N.Y.