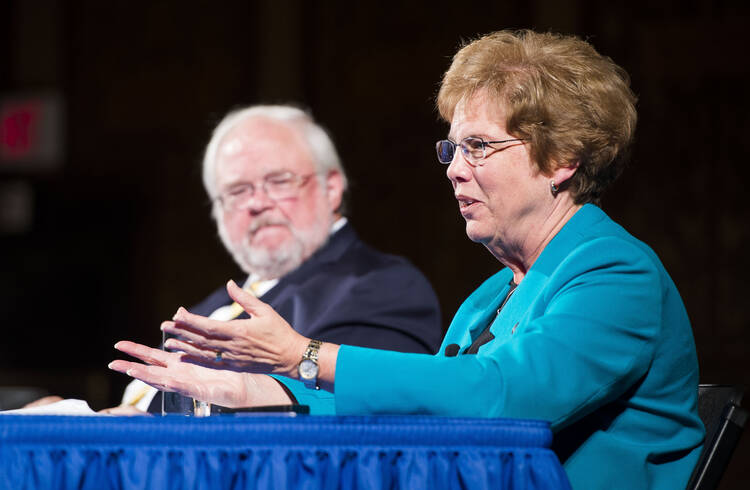 A group of Catholic women wants political leaders to think bigger when it comes to so-called family values, claiming that the election has been too quiet on topics important to families such as parental leave, the skyrocketing cost of child care and immigration policies that respect the rights of families to remain intact.

“Honoring the dignity of families requires rejecting a consumer culture where sex is viewed as a commodity; a commitment to ensuring mothers and fathers have access to paid parental leave; quality, affordable child care; jobs that pay living wages; and a humane immigration system that keeps families together,” says a statement signed by more than 70 women active in various Catholic ministries.

“Catholic social teaching does not fit neatly into partisan boxes,” it continues.

The left-leaning group Faith in Public Life spearheaded the effort to collect signatures for the letter, which will be advertised in various Catholic publications ahead of the Nov. 8 election. (A press release notes that an ad will appear in America.)

The statement, which condemns the 2016 campaign as one “characterized by the toxic politics of fear,” highlights the church’s teaching that life should be respected from conception until natural end, a belief that some say makes it difficult to support either political party.

“Our faith calls us to affirm the sacred dignity of all life,” the letter reads. “This is why our Church defends life in the womb, the undocumented immigrant and the inmate on death row.”

The signers promise to “commit ourselves to pray and work toward this vision of human dignity and justice. May all who aspire to political office do the same.”

Implicit in the letter are critiques of the platforms of both political candidates, such as Democratic nominee Hillary Clinton’s views on abortion and G.O.P. hopeful Donald Trump’s proposal to deport 11 million undocumented people, which would break apart families.

Both candidates, however, have expressed support for increasing the federal minimum wage and for enacting parental leave policies. The United States is one of the only developed nations that does not mandate paid leave for new parents.

If the implied message in the statement is that neither political party perfectly represents Catholic views well, the signers of the letter are not alone.

A survey released Oct. 25 from the Public Religion Research Institute found than more than six in 10 Americans believe “neither political party represents their views anymore.”

Michael O’Loughlinis the national correspondent for America and author of The Tweetable Pope: A Spiritual Revolution in 140 Characters. Follow him on Twitter at@mikeoloughlin.

@MikeOLoughlin
Show Comments (
4
)
Comments are automatically closed two weeks after an article's initial publication. See our comments policy for more.
William Rydberg
5 years 2 months ago
"Martha" finally speaks to Power! We need more Catholic Action in North America in my opinion... Deo Gratias!
Crystal Watson
5 years 2 months ago
This post gives the impression that all or most Catholic women are pro-life but that isn't so. Even nuns support reproductive rights ... http://religiousinstitute.org/ncan-reproductive-justice/
Carlos Orozco
5 years 2 months ago
Is that some Podesta-startup trying to initiate a "Catholic Spring" uprising within the Church? I hope not, their versions of Islamic social justice warriors have done way too much harm already in the ME. An obvious special-interest front group posing as Catholic. One only needs to read the first paragraph of their venomous language to understand where they are coming from: its politics over principles. "The National Coalition of American Nuns (NCAN) is dismayed that the Little Sisters of the Poor-Colorado, the University of Notre Dame and other Catholic organizations are challenging the Affordable Care Act. Spurred on by the United States Conference of Catholic Bishops these organizations are attempting to hold hostage all women by refusing insurance to them for contraceptives."
Mary Flynn
5 years 2 months ago
I am confused. Are they just echoing the US Bishops conference (question mark). Why in the world would "Martha" do that!