Years of recovery ahead in Haiti after Hurricane Matthew 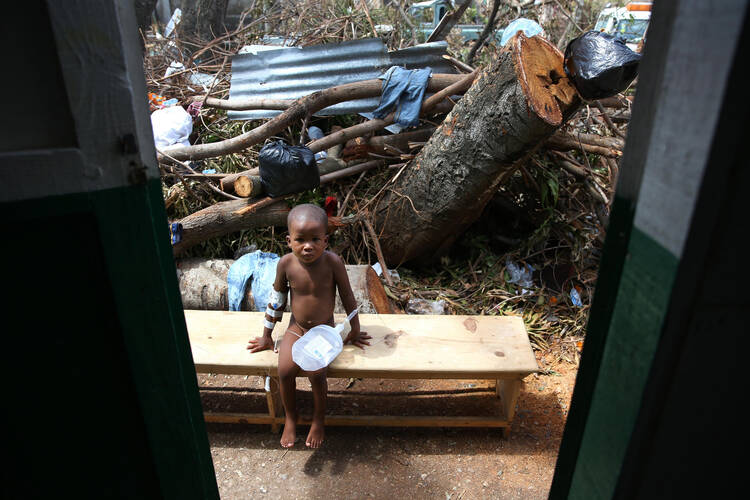 People of the south of Haiti are traumatized and the landscape “complete devastation.” Hurricane Matthew survivors “have never seen anything like this,” Christopher Bessey, the country representative for Haiti for Catholic Relief Services, reports. The Category 4 hurricane was the fiercest storm to make landfall here in 52 years. “They’ve basically lost everything.”

Most of the houses are gone, and those that aren’t are seriously damaged. Schools the region’s children should now be attending have likewise been damaged or destroyed as has other critical civil infrastructure

For the region’s farmers, Hurricane Matthew has been a crop killer; worse Matthew arrived just as they were preparing for rainy season planting. But this year there will be no planting and no harvesting; Matthew has overrun their fields with mud and debris and taken the seed from their homes.

The Associated Press reports one father of six who survived the storm with his family in Las Cayes examining the wreckage of fields he had cultivated for 25 years. His rice was swamped with river water; the family’s mango and breadfruit trees were split like matchsticks; his corn flattened or torn from the ground.

"It is going to take us a long, long time to get back on our feet," the farmer told AP.

Mr. Bessey reports such scenes are common all over the regions in southern Haiti that had been hardest hit by Matthew.

Crop loss in the south is virtually absolute and many crop trees—mango, cocoa and coconut—have been uprooted and thrown flat by the storm. “It’s as though someone went in and clear cut the entire area,” Mr. Bessey says.

“A tree crop like cocoa, they can take three years before it will start producing,” he adds, one small indication of how long the restoration to normalcy in Haiti will be and how much patience it will require.

In the meantime, the Haitian government reports that 1.4 million people will need immediate humanitarian assistance—food, clean water, temporary shelters. Mr. Bessey says C.R.S. teams are moving those commodities into the affected areas. Emergency medical assistance is also urgently required. Reports of cholera are already coming in as water supplies have been swamped and contaminated.

In a situation report filed Oct. 11 by the the Catholic Medical Mission Board, a volunteer reports:

Our country director finally got word from a partner in Jèrèmie [on Oct. 11], where we work at the Gebeau clinic. Communication has been nearly impossible. They asked us to send 50,000 food kits. I don’t know how we will do this. Right now that area isn’t even accessible by car. It will take a helicopter or boat. It took our entire staff a whole day to prepare 1/50th of that. Yet the need for food and clean water is urgent.

The official death toll is 473, though local officials have reported figures suggesting it will eventually be higher, and the homes of more than 120,000 families were damaged or destroyed.It will take months, if not years for recovery in the region, according to Mr. Bessey. “That’s assuming there is the right level of assistance.” He likens the completeness of the destructive force of the hurricane to the devastation of the 2010 earthquake. He is hopeful that in the coming weeks C.R.S. teams can begin long-term planning and the rebuilding of permanent homes for the people in Jèrèmie and other hard-hit communities.

The effort to rebuild after Matthew will demand a similar humanitarian response, he says. He is already worried that global media will move to a new crisis, “if it hasn’t already,” before the resources necessary for such an effort can be mustered.

“We’ve gotten great support from the Catholic bishops of the U.S.,” he says. “They’re making sure that the call goes out through the diocese and parishes, and we do hope that the story isn’t forgotten now.”

Kevin Clarke is a senior editor and chief correspondent at America.

@ClarkeAtAmericaclarke@americamedia.org
Show Comments (
1
)
Comments are automatically closed two weeks after an article's initial publication. See our comments policy for more.
William Rydberg
6 years 3 months ago
You really ought to be speaking with the Québécois members that are part of the CANADA and USA Society of Jesus. They can give you very insightful feedback from the Jesuit justice and peace perspective... in Christ,