When the U.S. deports Guatemalan migrants, this is where they end up. 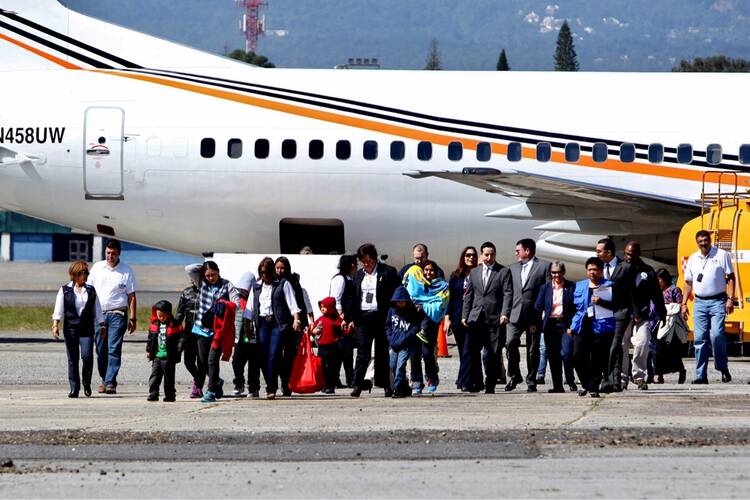 Four mothers and 10 children land in Guatemala City, Guatemala, Jan. 6 after being deported from the United States (CNS/photo/Esteban Biba, EPA).

The first Guatemalan deportee I meet has lived in New York longer than I have. Nine years. I’ll call him Miguel.

He first made the northward trek in 2000, when he was 14 years old. Since then, Miguel has had two children, by two different women, born in two different countries. He has made the 2,500-mile trek from Guatemala to the U.S. border twice since his second child was born—a year and a half ago, in the United States—only to end up here: the air force base where deported migrants are welcomed, registered and sent on their way in the country they sought, for various reasons, to leave behind.

Upbeat marimba music blares discordantly in the empty processing center, which feels like a high school cafeteria mixed with the DMV. Brown-bag lunches sit on white folding chairs opposite an elevated wooden counter and 12 computers. A football field away they start exiting the plane: first 10 or so women and girls, walking in threesomes or pairs; then a seemingly endless stream of men, young and old, make their procession across the tarmac. I try to make eye contact with each. Some flash a wide, confident grin, others a sheepish smile; many look stoically ahead, others, visibly upset, study the floor. Some are still wearing the plain white tees they were given at the border detention center. For security reasons, shoelaces and belts are not allowed. We are told their chains were removed prior to deplaning.

162  Guatemalans fill the white folding chairs. Two to three flights like this come in every day, four to six times each week. I thought I was here to put a human face to mass migration; instead, I am confronted with the sheer scale of the crisis.

But it is hardly the somber scene I expected. There is an animated call-and-response between the peppy representative from the Ministry of Foreign Affairs and the returning migrants. Even cheers at one point. One gets the feeling that many here been through this before.

Photographs are strictly banned, and we have been told to observe but to give the people space. But Miguel walks right up to us, eager to tell his story. He says he left for the United States as a teen because there was no work for him in his small town in the north. He worked cutting trees in White Plains, N.Y., for nine years. When his dad fell ill, he returned to Guatemala and then fathered a child in the country who died at four months. After his father died, he and a new girlfriend, pregnant at the time, again made their way north. She made it across the border; he did not. He has still not met his new child. When I asked him when he would try his luck at the border again he said maybe tomorrow, maybe in a few months.

Miguel’s story is perhaps not the one to tell when trying to get a sympathetic ear for migrants and refugees in today’s political climate. He did not say he was fleeing gang violence or political persecution. But he sees no future for himself or his family in Guatemala. And in a couple hours, some 200 more men and women just like him will fill these seats, and tomorrow the same. And like Miguel, many will try again.

A large sign behind the counter reads “Ya estás en tu país and con tu gente”: “You are now in your country and with your people.” I imagine it is a bittersweet welcome. Most people you talk to will say they love their home country and would remain here if they could. Over the next week, I will be traveling with Catholic Relief Services to hear from Guatemalans themselves about the conditions that are forcing so many to leave—and what can be done to help them stay.

Ashley McKinless is an associate editor at America and was awarded the 2016 Egan Journalism Fellowship by Catholic Relief Services. She is traveling in Guatemala and Honduras with C.R.S. from Oct. 3 to 14. Follow along on Twitter:  @AshleyMcKinless.

Ashley McKinless is an associate editor at America and was awarded the 2016 Egan Journalism Fellowship by Catholic Relief Services. She is traveling in Guatemala and Honduras with C.R.S. from Oct. 3 to 14.