Sports can be work of the Spirit, Pope Francis says 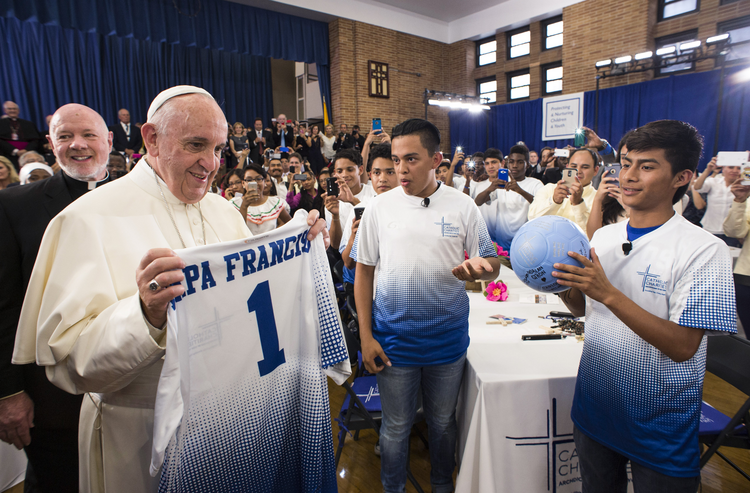 Pope Francis receives a Catholic Charities jersey and an autographed soccer ball during his meeting with immigrant families at Our Lady Queen of Angels School in the East Harlem area of New York in September 2015. (CNS photo)

Pope Francis has called on representatives of sports and the businesses that sponsor sporting events to play their part in maintaining “the honesty of sport” and “in protecting it from the manipulations and commercial abuse.”

He issued his timely call at a moment in history when the good name of sports has been brought into disrepute in many countries due to doping scandals and other malpractices. “It would be sad for sport and for humanity if people were unable to trust in the truth of sporting results, or if cynicism and disenchantment were to drown out enthusiasm or joyful and disinterested participation,” the pope told an international gathering in the Paul VI audience hall on Oct 5.

“In sport, as in life, competing for the result is important, but playing well and fairly is even more important,” he said. The pope was addressing the opening event of the first Global Conference on Faith and Sport, being held in the Vatican on Oct 5-7. Its theme is “sport at the service of humanity.”

He thanked the conference attendees for their “efforts to uproot every form of corruption and manipulation” and noted that the United Nations too is leading a campaign “to fight against the cancer of corruption in all areas of society.” Indeed, he said, “when people strive to create a society that is fairer and transparent, they collaborate with the work of God” and religious leaders support and contribute to that commitment.

The event, organized by the Pontifical Council for Culture under its president, Cardinal Gianfranco Ravasi, brought together not only athletes at Olympic and amateur levels but also representatives of different religious communities, including Christian and Muslim; business leaders; the president of the International Olympic Committee, Thomas Bach; and outgoing U.N. Secretary General Ban Ki-moon.

Pope Francis described sports as “a human activity of great value, able to enrich people’s lives” that is enjoyed “by men and women of every nation, ethnic group and religious belonging.” He mentioned, as an example, the recent Olympic and Paralympic Games in Rio de Janeiro which drew the world’s attention.

“When we see athletes giving their very best, sport fills us with enthusiasm, with a sense of marvel, and it makes us almost feel proud.” Moreover, he said, there is “great beauty in the harmony of certain movements and in the power of teamwork” and when it is like this “sport transcends the level of pure physicality and takes us into the arena of the spirit and even of mystery.”

Sports, however, are not just for “high performance athletes,” Francis said; they are also “for pleasure, for amateurs, for recreation, not aimed at competition, but allowing all to improve their health and well-being, to learn to be a part of a team, knowing how to win, but also how to lose.”

He applauded the fact that this international conference is reflecting on ways to ensure that sports are “always more inclusive and that its benefits are truly accessible to all.” He recalled that the different religious traditions share the common commitment “to ensure the respect for the dignity of every human being.”

He expressed his joy that the world’s sporting institutions “have taken so courageously to heart the value of inclusion,” including through the Paralympic movement and other sporting associations that sustain those with disabilities, such as the Special Olympics. These events help people “recognize and admire the extraordinary performances of athletes with different abilities and capacities,” he said.

In this context, Pope Francis drew attention to the many children and young people who live at the edges of society but still with great enthusiasm “play with a rugged old deflated ball in the suburbs of some great cities or the streets of small towns.” He urged and encouraged institutions, sporting societies, educational and social organizations and religious communities “to work together to ensure these children can take up sport in circumstances of dignity, especially those who are excluded due to poverty.”

He assured that the Catholic Church “is working in the world of sport to bring the joy of the Gospel, the inclusive and unconditional love of God for all human beings” and concluded by saying that he hoped these days of reflection at the conference would enable participants “to explore further the good that sport and faith can bring to our societies.”

@gerryorome
Show Comments (
1
)
Comments are automatically closed two weeks after an article's initial publication. See our comments policy for more.
William Rydberg
4 years 9 months ago
For the first time I wonder about the prudence of residing at Santa Marta. Its as though he has become what is termed a TV Priest. We are close to Nuclear War according to some, and our Pope is otherwise engaged. In my opinion, in Christ