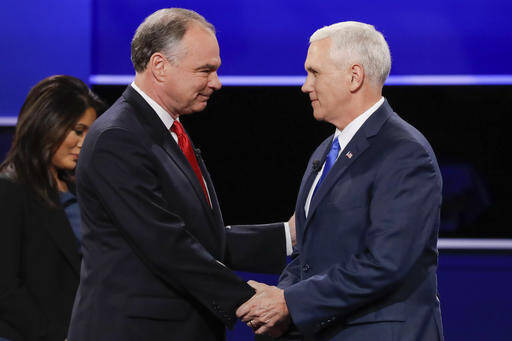 While much of Tuesday’s vice presidential debate between Democrat Tim Kaine and Republican Mike Pence focused on foreign policy and defending their running mates from attacks, a question about the role faith has played in each of the candidate’s lives stirred up a few minutes of back and forth between the two men about how political figures should balance religious beliefs in the public square.

Mr. Kaine, a U.S. senator from Virginia, recalled his own religious background, raised in an Irish-Catholic family, educated by Jesuits and volunteering at a church-run vocational school in Honduras.

“They were the heroes of my life,” he said of the Jesuits who ran the school.

Mr. Kaine said the most difficult moment he has had living out his faith in public life was carrying out executions as governor of Virginia, a practice that went against both his own faith and the teachings of his church.

As a young attorney in Virginia, Mr. Kaine offered his legal services free of charge to death-row inmates seeking exoneration, activity the G.O.P. highlighted recently in an attack ad.

But during his time as governor, Mr. Kaine oversaw the execution of 11 criminals, six of them black.

“When I was running for governor, I was attacked pretty strongly because of my position on the death penalty,” he said. “But I looked the voters of Virginia in the eye and said, ‘Look this is my religion and I’m not going to change my religious practice to get one vote. But I know how to take an oath and uphold the law, and if you elect me I will uphold the law.’”

Mr. Kaine used the example to say that it is essential for elected officials not to impose their own religious beliefs on others.

“I try to practice my religion in a very devout way and follow the teachings of my church in my own personal life,” he said. “But I don’t believe in this nation, this first amendment nation, where we don’t raise any religion over the other and we allow people to worship as they please, that the doctrines of any one religion should be mandated for everyone.”

Speaking after Mr. Kaine, Mr. Pence said his “Christian faith is at the very heart of who I am,” recalling attending church with his family on Sunday mornings and praying before meals.

Pence was raised Catholic, which he did not mention Tuesday, but he said that his “Christian faith became real for me when I made a personal decision for Christ when I was a freshman in college.” Today, he worships at an evangelical church.

The Indiana governor said that his Christian beliefs inform his views against abortion. He said earlier this year that he believes the Supreme Court decision legalizing abortion should be overturned.

“We’ll see Roe vs. Wade consigned to the ash heap of history where it belongs,” he said in July.

Mr. Pence said on Tuesday he could not understand how Democrats “support a practice like partial birth abortion,” and said that his running mate Donald Trump is firmly pro-life. Some Catholics who resisted Mr. Trump during the primaries have come around in part because of his promise to appoint pro-life judges.

Mr. Pence noted that Mr. Kaine is against using taxpayer money for abortion, a policy difference with his running mate.

“I’ve appreciated the fact that you’ve supported the Hyde Amendment that bans the use of taxpayer money for abortion in the past,” Pence said. “But that’s not Hillary Clinton’s view.”

Mrs. Clinton has called for an end to the decades-old amendment that prohibits federal money from paying for abortions.

Mr. Kaine defended his position, saying that he and Clinton “support the constitutional right of American women to consult their own conscience” when it comes to choices about reproductive health care.

Earlier this year, Donald Trump said women who choose to end a pregnancy should face “some form of punishment” if abortion rights are overturned. Mr. Pence suggested his running mate misspoke, saying he is “not a polished politician.”

Mr. Kaine dismissed that assertion and used a Gospel passage to bolster his case.

“A great line from the Gospel of Matthew, ‘From the fullness of the heart the mouth speaks,’” he said. “When Donald Trump says women should be punished, or Mexicans are rapists and criminals, or John McCain is not a hero, he is showing you who he is.”

For his part, Mr. Pence said he supports expanding access to adoption, saying “There are so many families around the country who can’t have children.”

“A society can be judged by how it deals with its most vulnerable: the aged, the infirmed, the disabled and the unborn,” he said. If Americans “come together as a nation, we can create a culture of life.”

Mr. Kaine agreed, but said the decision about abortion should be left to women.

“That’s what we ought to be doing in public life, living our lives of faith or motivation with enthusiasm and excitement, convincing each other, dialoguing with each other about important moral issues of the day,” he said. “But on fundamental issues of morality, we should let women make their own decisions.”

This was the only debate between the two candidates for vice president. The two presidential candidates will square off again Sunday night in St. Louis.

Michael O’Loughlin is the national correspondent for America.

It was back in 2008 when he was governor. http://bit.ly/2dNSfbW
Carlos Orozco
6 years 3 months ago
As preparations by warmongering, rogue elements are made to start WWIII, in a desperate attempt to avoid the DEFINITIVE COLLAPSE of the heavily armed and mechanized al-Nusra Front (al-Qaeda in Syria) in Aleppo, who has time to talk about the phony VP candidates? Fifteen years after 9/11, corporate media whitewashes the atrocities of the Islamic barbarians and spreads the propaganda of the banking-industrial-military complex, blaming Putin and al-Assad for all sorts of war crimes. The neocons cannot be allowed to make their FINAL ESCALATION of the disastrous foreign policy of wars of aggression and bankrupting debt. Incompetent Obama is completely overwhelmed by the situation and would rather run out of Washington to campaign for Clinton. But, in case you still give a damn, Hillary's pro-abortion "Catholic" waterboy lost the debate. Not even seventy-something interruptions from little Timmie could stop Pence from portraying Hillary as the crook that she is.