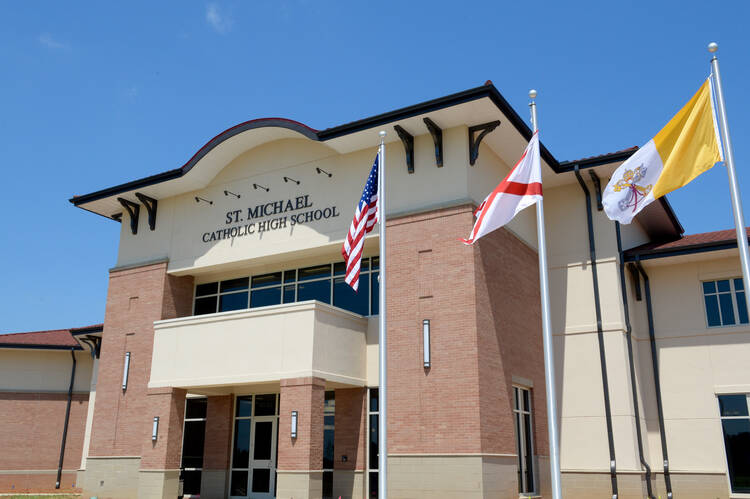 For nearly 40 years, the people of Baldwin County have been praying for a Catholic high school. That dream was realized on Aug. 17, 2016, with the opening of St. Michael Catholic High School in Fairhope, Ala.

“Reinventing Catholic Schools,” by Charles Zech (8/29), is accompanied by a photo of the entrance to a large, run down building with broken windows. The picture reflects the bleak message of the entire piece, which fails to mention the incredible work being done in Catholic schools across the country today. As the superintendents of Catholic schools and members of the National Catholic Educational Association, we work each and every day in schools that look nothing like what the author describes.

Are there challenges in Catholic schools today? Of course. But there were also challenges 50 years ago. The religious who built and served Catholic schools for generations were heroes and saints, and we are honored to stand on their shoulders working with these hallowed institutions. And as people of faith, we believe that God has chosen us and those who work hard every day in Catholic schools across the country to serve at this time.

Professor Zech writes, “It is no longer good stewardship on the part of Catholic dioceses and parishes to continue supporting the old model of Catholic parochial schools.” This implies that those dedicated servants who sacrifice and work daily in these institutions, along with students and families, are wasting church resources. We see funds spent on Catholic schools as an investment in children and the future of the church. The idea of stewardship is to return with increase to the Lord, and research consistently demonstrates that graduates of Catholic schools are among the most academically prepared, generous and civically engaged.

Professor Zech writes that “over time the Catholic population has migrated to the suburbs and increasingly to the South and West…. But the parishes and parochial school buildings still tend to be located in urban areas in the Northeast and Midwest.” In fact, there are already many thriving Catholic schools and parishes in the South and West. Their growth is driven by young, mostly immigrant families who desire a Catholic school education. To give up on these vital institutions would be akin to eliminating Catholic schools in the Northeast 100 years ago when they provided the foundation that allowed Irish, Italian, Polish and other immigrant populations to work their way up in U.S. society. The same work, with the same goal, continues today.

We encourage Professor Zech to visit Catholic schools across the country to see the incredible innovations taking place. These include dual-language immersion, an increase in services to students with special needs, work-study schools like the Cristo Rey Network and ever-increasing support from the community—not only the Catholic community but local communities that understand the value of Catholic schools.

The true story of Catholic schools in the United States is their continued success despite difficulties and their ability to overcome challenges. Catholic schools continue to outperform public and private schools and do a particularly effective job with low-income, minority students. Professor Zech writes that “many urban parochial schools find themselves serving a population that struggles to afford parochial school tuition. Many of these students are not Catholic.” This again indicates a lack of understanding of Catholic schools, especially in the West, where the urban population is largely Catholic. Shuttering schools that serve low-income populations, preserving only those that serve the suburban well-off, contradicts our vital mission to provide a “preferential option for the poor.” Affordability of our schools is a substantial challenge, even while our schools attempt to maintain a relatively low cost of tuition. The momentum of the school choice movement has greatly assisted our families; to date, 27 states and the District of Columbia have some form of parental choice program, and the trend is toward greater levels of public funding support.

To further provide assistance to those low-income families, there is tremendous philanthropic support and great partnerships, from the Catholic Education Foundation in Los Angeles to the Catholic Schools Foundation in Boston and so many more. The value of our schools is perhaps most evident in weekly giving from our Catholic parishioners, many of whom do not have school-age children of their own, who give selflessly to their local parishes knowing that they are supporting Catholic school education, which brings life and vitality to our parishes.

If, as Professor Zech states, the issue of a lack of Catholic giving is such a significant limitation, we should focus on that cause rather than the effect of reduced funds for ministries. Catholic schools are a ministry and continue to be one of the church’s most effective instruments for passing on the faith from one generation to the next.

Catholic schools should be seen by all the faithful as a vital component to passing on the faith. Yes, there is a need to investigate alternative structures and models, but it is certainly not the time to give up or propose simplistic one-size-fits-all solutions. While there are problems, there are also real solutions—solutions that are being implemented across the country and that reflect a focus on growth, not resignation to decline. We are moving away from the hospice mentality to a growth mindset that is optimistic in its approach to growth. We are entering a genuine renaissance period in Catholic education, as evidenced by innovative programming, a surge of enrollment in certain regions and renewed confidence for the future.

Every day the 150,000 Catholic school educators in the country, supported by pastors, superintendents, bishops and the National Catholic Educational Association, teach and form students because they believe in Catholic education. We welcome Professor Zech and his colleagues from the Villanova University Center for Church Management & Business Ethics to visit with us and any of our Catholic schools to see the great work being done.

Correction: Sept. 21, 2016
A previous version of this article misstated Charles Zech's professional association. He is the faculty director for church management at the Villanova University Center for Church Management & Business Ethics, not the Villanova Church Leadership Roundtable.

Secretary for Catechetical Formation and Education/Superintendent of Schools

Christopher MomineyChief Operating Officer and Secretary for EducationArchdiocese of Philadelphia

Our readers
Show Comments (
3
)
Comments are automatically closed two weeks after an article's initial publication. See our comments policy for more.
William Atkinson
6 years 4 months ago
The KEY about growth in Catholic America, especially when it comes to good quality Catholic schools is: Yes is the massivlly growth in the magisterium (Bishops, Archbishops, cardinals), the country has grown massively since 1900, from about 150 million to well over 4.5 (more likely 5) hundred (500 Million) million and yet the number of diocese/archdiocese has hardly increased; especially in the south and out west. In fact there are no, yes NO cardinals farther than Mississippi River, with exception of Houston, Texas Great growth in these regions have not seen any new diocese in decades. San Diego is now 8th largest city in USA, and only one bishop serves the vast numbers (over 1 million Catholics). Catholics in America, especially the vast numbers of immigrants, need pastoral care. The largest population area in America, the largest archdiocese in America has only 4 bishops, and NO Cardinal. At least the leadership in the east could have co-archdiocese with shared metropolitian cardinal (Boston/San Francisco - New York/LA - Washington DC/Seattle - Denver/Philadelphia - Dallas/Houston). 350 dioceses in 1950 should today be around 500 diocese with shepherds. Once the leadership of the church takes care of the shepherd needs then the growth, schools, churches, marriages, baptisms will grow. Interesting, Italy with 43 Cardinals, 350 bishops, and over 3000 priests and religious is the size of Florida or California. The Catholic Church in America is void and hurting for shepherd pastoral leadership and care.
Chuck Zech
6 years 4 months ago
I’m pleased that the superintendents and NCEA members have joined me in a serious discussion of the future of Catholic education in this country. I only wish they had read my article before responding. To be clear, I was not critical of Catholic education. As I pointed out, I am a proud product of Catholic schools. What I was critical of is the way that Catholic education is delivered in this country. It is the SYSTEM that I am criticizing. The old parochial school system is a dinosaur. Factors have arisen, as I detailed in my article, to make it unsustainable. These factors are not going to be reversed. I wish that in their response the superintendents had focused on solutions to the problems that the system faces and not use anecdotes and specific examples of success to justify maintaining the whole system as it is. It is time for the superintendents to start thinking outside the box. Where can parochial schools be saved? Where can new models, like Christo Rey, be most effective? And where can Catholic charter schools make a contribution. I was stunned that the superintendents stated, “there is no such thing as a Catholic charter school”. After my article appeared, I received communications from a number of individuals across the country who have Catholic charter schools in their area. Two of the most successful are in Chicago, (one of the superintendents signing the letter is from the Chicago Archdiocese) the Catalyst Schools, which call themselves Lasallian urban charter schools. They were started by the Christian Brothers. That’s a pretty good Catholic pedigree. Finally, I feel badly for some of my colleagues. For whatever reason the superintendents believe that my professional affiliation is with “the Villanova Church Leadership Roundtable”. As the article clearly stated at the end, I am the director of the Villanova University Center for Church Management & Business Ethics. It is unfortunate that my friends at the Leadership Roundtable have been painted with the same brush that the superintendents mistakenly painted me. Let me make it clear that they had no input into this article. The fact that my affiliation was clearly stated certainly calls into question the extent to which the superintendents had actually read the article. As I noted above, I am pleased that the superintendents responded. I hope others will join the discussion.
Joseph Curtin
6 years 4 months ago
Several years ago I attended the 100th anniversary celebration of my old all-white (by design) Catholic elementary school in the South Bronx. It is now 100% minority. It was evident to me that the school was better now than when I attended, but it was also evident that the high tuition costs were having a negative impact on enrollment. I left the celebration feeling that the school's days were numbered, and that the school would become another statistic of "brown" schools which have been closed in the NY Archdiocese over the past several years. If the school doesn't exist, it can't be failing.