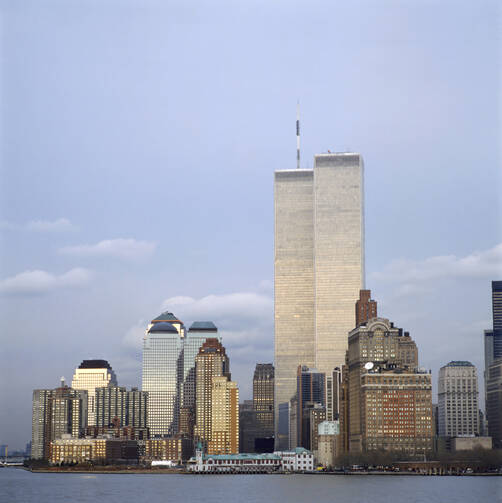 Fifteen years ago, it began as a beautiful, sunny, cloudless September day. It was a somewhat cool and brisk morning: it gave a hint of the seasonal changes that were to come and the invigorating feeling it offered was a welcome way to begin the post-summer period.

When I walked through the front door of America House that day and stood by the elevator waiting for a lift to my third-floor office, I could not help but think about the beautiful New York skyline I saw when I looked out the window of the express bus that had taken me from my Rockland County home over the Tappan Zee Bridge to Westchester’s Tarrytown Metro North station and the train that would transport me and numerous other commuters to our midtown jobs. I could only marvel that a place that was just 15 miles away from home had such a hold on my imagination. Here was the great metropolis where generations before me had sought to make a living and a life.

My reverie was broken by the sound of a human voice; someone had come running out of the business office yelling that a plane had crashed into the World Trade Center. For a moment I wondered if I heard right; for some reason I thought of the biplane that had crashed into the Empire State Building in the 1940s. I remember thinking and hoping that it wasn’t something unduly serious—but it was.  A beautiful day had been darkened by an act of terror.

Before long, word had spread about what had happened: two airliners swirled around the twin towers of the World Trade Center and deliberately made direct aim at the buildings, leaving death and destruction in their wake.  Before long the entire America staff crowded into the sixth-floor TV room to watch the unfolding coverage of unspeakable carnage. Right up until 10 o’clock that morning, every station was showing how the plane (which would turn out to be the first of two) crashed into the first of the towers, resulting in the enveloping smoke and fire. Then, unbelievably, the second plane crashing. And then the implosion of the first building and then of the second. All this, before our very eyes on television—and we were barely miles from where it was happening.

Cries and gasps of disbelief filled that room; the shock of it all nearly immobilized us. And yet we had to do something. And being Catholic Christians, that “something” was to pray—pray for those attacked, pray for those who could have survived and to pray for our country in this hour of trial, and that somehow we would all get through this incomprehensible tragedy. Within a day or so, the staff at America would gather together in the fifth floor house chapel for a special Mass to pray for all affected, including ourselves—for almost everyone knew someone who knew someone who was affected by this ever enlarging tragedy. Our hearts were filled with fear, our minds were clouded with worry, and our chests were tightened with anxiety.

For people of faith, the horror of that day caused one to look up at the cross of the one who knew—and experienced—hatred and violence. And because of what had happened we all found ourselves at the foot of another cross. We could barely mouth the word pondered by everyone who has ever encountered such evil and been numbed by it: “Why?”

Before long, if we couldn’t understand the reason, people of faith could employ a remedy: mercy. Mercy to the dead. Mercy to the suffering. Mercy to the bereaved. Mercy to fellow human beings. But that would only come within the immediate aftermath of the horror—slowly, many of us had to come to our senses and deal with the tragedy in the way our particular circumstances called for.

I left the TV room and went back to my office and I called home to see how my parents—Ellen and Harry—were. I wanted to hear them—I wanted to know that they were all right even though they were miles away on the other side of the Hudson River from where the obscene tragedy occurred. They had watched morning Mass and had turned back to the morning news, and were transfixed like everyone else at what was unfolding before their eyes. It was then that I got an unanticipated shock, and it involved my own sister, Cathy.

My sister worked at Emigrant Bank on 42nd Street and when it happened, I tried calling her, but there was no answer. I thought, well, she must be in a meeting or she had stepped away from her desk. I had told my mother this when I phoned her; she said that as she left that morning, my sister told her on the way out that she was going downtown to some meeting on behalf of the bank and that it was near the World Trade Center. It turned out to be the Federal Bank Building some three blocks away. We did not know any of this at the time; we were all anxious and hoped for the best. My sister turned out to be safe; when she was able, she called all of us some hours later. It turned out that the building she was in went into immediate lockdown and no one was allowed to leave.

My sister and I made plans to catch up with each other on the way toward Grand Central so we could get the train to Tarrytown together and make our way home, like everyone else. With communications and transportation networks under unbelievable strain (and basically broken down), we were told to go home as soon as possible.

I have three distinct memories from that day. The first was when after I had made those phone calls and found out my parents and sister were all right, I stepped outside of the building at mid-day. What I saw was not normal for a New York mid-day: the streets were deserted, and just about every store was locked up. Normally gruff New Yorkers were nowhere to be found; they sought reassurance and security where it could be found; and naturally that place was home, where people who loved them lived. The silence, the absence and the desertedness I encountered was eerie and profound.

The second was when I finally met up with my sister to head toward Grand Central. Because of what happened, and due to the fact that public transportation was basically nonexistent, she and numerous others had to walk all the way uptown to make their way toward transportation hubs and thus home—and that was a 40-block walk. She looked just as she did when she left the house in the morning, until I looked down at her feet: her shoes were covered in the gray dust; it was the gray dust that showered anything and everyone in the immediate aftermath of the buildings’ collapse. In truth, it was the dust of the dead and the detritus of what was once a workplace, now together as one.

And lastly, the most vivid memory I have of that day occurred on that Metro North train on the way to Tarrytown and eventually, home. Since public transportation was in flux, Metro North was operating on limited service. Literally, people had to cram onto the train like sardines in a can—there was no chance of getting a seat that afternoon. We were lucky to get on a train that would get us away as far as possible from an awful day—if such a thing was possible. Everywhere you looked everyone had a shocked and worried expression on their faces. Everyone wondered what was going to happen. There was complete and utter silence.

I could not help but look at my fellow passengers on that train; I couldn’t help noticing one young man in particular, possibly not much older than myself, who got off at the Yonkers stop. He had tightly grasped the railing in the middle of the car for the entire trip and when he exited, he did so with heavy steps and a glazed look in his eyes. He started to take out a cigarette and put it in his mouth, but he did not light it. Instead, it dangled from his lips, and he stood in the middle of the platform, his body not moving. He was immobilized, numb in mind and body. I kept looking out the window at the scene as the train moved on toward Tarrytown; and I thought, he represented all of us on that day.

We began it with bright hopes and it ended in a fog of fear and uncertainty. We were paralyzed by what happened, but we needed to get moving to make sense of what happened to us and our world and somehow begin to repair what could never be repaired. And even now, fifteen years later, even though we remember the horror of it, we can never forget the feeling of it—and it still has the power to frighten even the most hardened among us.

This Sunday will mark 15 years since the terrorist attacks on September 11. James Martin, S.J., Olga Segura, Joseph McAuley and Jeremy Zipple, S.J., were all in New York City that day, and will be sharing their memories. Send us your own memories, or any questions you have for them.