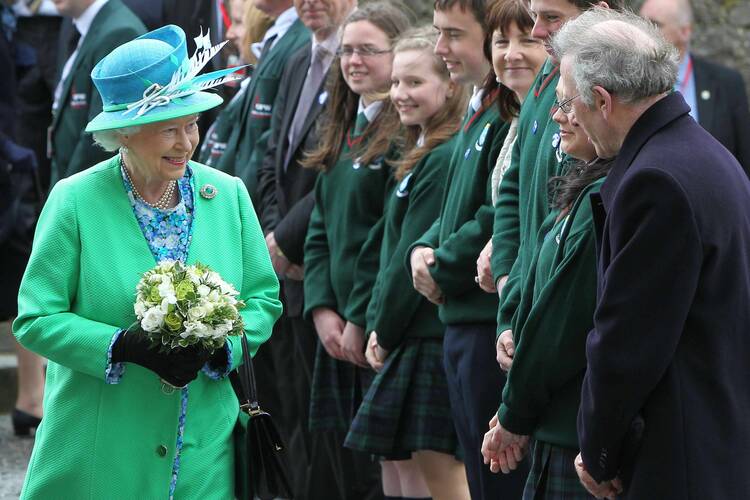 At precisely noon on May 17, 2011, the 85-year-old daughter of the last king of Ireland touched down at Casement Aerodrome, a military airfield southwest of Dublin. For the first time in a century, a reigning British monarch set foot in what is now the Republic of Ireland but for centuries had been the impoverished vassal of its English overlords. The royal visit marked the full realization of the Good Friday Agreement of 1998, the international agreement between the British and Irish governments that restored home rule to Northern Ireland and brought an end to decades of bloody conflict.

For Queen Elizabeth II, the visit marked another milestone. After nearly 60 years on the throne and millions of miles traveled, she had never visited the Republic of Ireland. Yet she was determined to make the trip, motivated in large part by her sense of Christian duty to reconcile the estranged, to be a healer of the breach. “God sent into the world a unique person—neither a philosopher nor a general (important though they are)—but a Saviour, with the power to forgive,” she said in her Christmas broadcast that year. “Forgiveness lies at the heart of the Christian faith. It can heal broken families, it can restore friendships and it can reconcile divided communities. It is in forgiveness that we feel the power of God’s love.”

Forgiveness, of course, is much more than a feeling. It is a series of small, often painful acts that culminate in a conversion of hearts that creates the very possibility of peace. Queen Elizabeth II put forgiveness into action.

Forgiveness, of course, is much more than a feeling. It is a series of small, often painful acts that culminate in a conversion of hearts that creates the very possibility of peace. Queen Elizabeth II put forgiveness into action. “With the benefit of historical hindsight we can all see things which we would wish had been done differently or not at all,” she said at the state dinner hosted by the Irish president, Mary McAleese. “To all those who have suffered as a consequence of our troubled past I extend my sincere thoughts and deep sympathy.”

That sympathy runs deep, for the queen’s visit to the republic was not just a moment of reconciliation between two long-estranged peoples, but her personal act of forgiveness. When Lord Louis Mountbatten was killed by agents of the Irish Republican Army in the summer of 1979, the queen suffered the loss of one of the most beloved members of her family, the uncle of her husband and the godfather of her first son. It was a truly extraordinary moment, therefore, when she laid a wreath at a memorial garden in Dublin dedicated to the memory of “all those who gave their lives in the cause of Irish Freedom.” She had somehow found the courage within her to forgive, to rebuild, to begin anew.

It is from numberless such personal acts of courage and charity that peace has at last come to Ireland. As important as big international agreements are, they are not the true stuff of reconciliation. Peace happens when hearts meet. The long process of peace-building involves a thousand mostly private moments of mercy that are nonetheless identical in substance to the very public process in which the queen participated. But we must have the courage to try, the hope that the trying is worth it and the faithfulness to persevere.

In the course of a century, the editors of this magazine have unashamedly championed the cause of Irish freedom. In doing so, we have had a few unkind words to say about the British and the queen’s predecessors. As we mark the centenary of the Easter Uprising, we celebrate the fulfillment of our forebears’ dreams, but we also repent of what we too have done and failed to do. Yet in repentance there is hope, the very hope we saw during those mid-May days in 2011. In the words of Seamus Heaney:

History says, Don’t hope
On this side of the grave,
But then, once in a lifetime
The longed-for tidal wave
Of justice can rise up,
And hope and history rhyme.
More: Europe / War & Peace

@americaeditor
Show Comments (
3
)
Comments are automatically closed two weeks after an article's initial publication. See our comments policy for more.
Richard Booth
6 years 7 months ago
If I may say so, the loss experienced by QE2 was nothing in comparison to the multitudes of Irish men, women, and children who were humiliated, starved, and slaughtered by British regular and other armies. A hundred years ago, she would have been shot (if possible) by those her ancestors annihilated. She is forgiving the Irish? Hmmm. Somebody got this backwards, methinks.
Monica Doyle
6 years 7 months ago
Although I was born in America, I find the troubled history of Ireland to sometimes cause me great sadness. It's as if the sufferings of my forebears have somehow been ingrained in my DNA. And my DNA includes a Catholic mother and an Episcoplain father, both from the lovely city of Derry. I recently watched the movie 'Brooklyn' , and although the movie ends on an upbeat note, the sadness I felt over young adults having to emigrate from their country to find work lingered for a while. Our local public television has been airing shows about The 1916 Easter Rebellion, and again I found watching it causing me great sadness. But this morning I am smiling, as this is the loveliest and most hopeful take on the tortured history of the island of Ireland I have seen. Thank you! I will re-read this many times, and use it as a buffer if the sadness creeps in again. This is one of the many reasons I love ' America '.
BRYAN KEILTY
6 years 7 months ago
In 1967 V.S. Pritchett could have been describing the Queen's visit in his wonderful Dublin: A Portrait: "The British have astonished Dubliners by regarding the men of the Rising as heroes; it would be easy to say about this admiration that it is one more example of the English habit of forgiving those you have injured."