Same-Sex Marriage Decision Resolves One Question, Raises Many Others 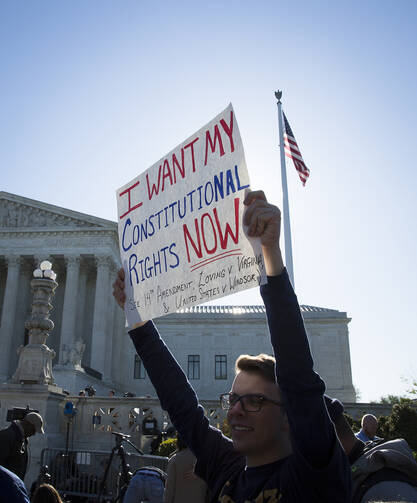 The U.S. Supreme Court decision in Obergefell v. Hodges, which ruled that same-sex couples are entitled under the due process and equal protection clauses of the Fourteenth Amendment to the same marital rights as opposite-sex couples, is of monumental legal importance. The most obvious, celebrated and decried impact is the nation-wide recognition of the current and future marriages of same-sex couples, which includes all concomitant spousal and parental benefits and responsibilities. Justice Kennedy’s sweeping decision, which was joined by Justices Breyer, Ginsburg, Kagan and Sotomayor, invalidates all state constitutional and statutory defense of marriage provisions and requires marriage licenses to be issued without regard to sexual identity.

The decision resolves one question regarding marriage, but leaves open several others that have significance even for those, such as Justice Scalia, for whom “[t]he substance of [the]decree is not of immense per­sonal importance.” The dissenters are concerned about the constitutional ramifications of a decision that reignites the debate over the Supreme Court’s power to declare new, constitutionally protected, fundamental due process rights; the standard to be applied in equal protection clause claims based on sexual identity; and the proper balance between the right to same-sex marriage and other constitutionally protected rights, such the freedom to exercise religion. These concerns may seem too theoretical for those in the midst of profound jubilation or despair, but legal abstractions have concrete results and it is worth understanding the dissenters’ objections as the nation moves forward.

The Fourteenth Amendment declares, no state may “deprive any person of life, liberty, or property, without due process of law; nor deny to any person within its jurisdiction the equal protection of the laws.” The due process and equal protection clauses often are used, as they were in the Obergefell case, in tandem to support asserted rights, but they are not identical and the Supreme Court has developed different guidelines for each clause.

The Constitution protects certain specific rights, such as free speech and trial by jury, but the due process clause is more general; it prohibits the government from depriving persons of the undefined rights of “life, liberty, or property.” The clause requires certain procedural safeguards prior to, during or after the government takes action. These include notice to the affected persons and an opportunity to be heard, but it also has been used to proclaim specific “substantive” due process rights when, as Justice Kennedy stated, the courts identify “interests of the person so fundamental that the State must accord them its respect.” In Obergefell, the Supreme Court identified a substantive due process right to same-sex marriage. The court’s use of its power to declare fundamental rights should be used sparingly as it often usurps the will of the people and their democratically elected legislatures and has been used in the past to ill effect, but Justice Kennedy and four of his colleagues determined this extraordinary measure was well justified by the great need of same-sex couples to fully participate in the bonds of matrimony.

Justice Kennedy’s majority opinion begins with the statement, “The Constitution promises a liberty that includes certain specific rights that allow persons, within a lawful realm, to define and express their identity.” This guarantee of identity definition and expression is different from the dissenters concept of a fundamental due process right that, at its most general interpretation, could be stated as “the right to be let alone.” The court justifies its action by building on previous rulings in Griswold v. Connecticut (1965) (declaring a right of marital privacy to overturn anti-contraception laws), Loving v. Virginia (1967) (recognizing a fundamental right to marry to overturn anti-miscegenation laws), Zablocki v. Redhail (1978) (invalidating a law that denied the right to marry to fathers behind on child support), Turner v. Safley (1987) (upholding the right of prison inmates to marry) and Lawrence v. Texas (2003) (recognizing the right to engage in consensual sexual conduct to overturn anti-sodomy laws). The decision takes cases that prohibit unjustified limitations on opposite-sex marriage and personal behavior and reads them as establishing governmentally recognized marriage as a right so fundamental it must be granted to same-sex couples.

The court relies on a four-part analysis of marriage to justify its expansion of marital rights: (1) “personal choice regarding marriage is inherent in the concept of individual autonomy;” (2) marriage is “a two-person union unlike any other in its importance to the committed individuals;” (3) “protecting the right to marry safeguards children and families;” and (4) “marriage is a keystone of our social order.”

Perhaps credit for the decision should go to Mrs. Kennedy because Justice Kennedy has such an extraordinarily high regard for the virtues of marriage, he comes close to declaring it essential to human existence. Justice Kennedy explains his first two principles of marriage by stating, “The nature of marriage is that, through its enduring bond, two persons together can find other freedoms, such as expression, intimacy, and spirituality. Marriage responds to the universal fear that a lonely person might call out only to find no one there. It offers the hope of companionship and understanding and assurance that while both still live there will be someone to care for the other.” These are lofty words, but not convincing from a legal standpoint, and, to be honest, do not reflect the lived reality of many married – and all divorced – couples. As Justice Scalia noted, “Expression, sure enough, is a freedom, but anyone in a long-lasting marriage will attest that that happy state constricts, rather than expands, what one can prudently say.”

While married couples may strive for the type of perfect union described by Justice Kennedy, secular marriage can more honestly be described as a valuable legal and social convenience, which makes Kennedy’s last two principles more compelling. Under current state and federal law, marriage does bestow unique benefits regarding important matters as parental rights, property ownership, social security and inheritance. Even the dissenters recognize these benefits as possible justifications for an equal protection claim to same-sex marriage, but they are concerned that such interests have been held to create a fundamental right. As Chief Justice Roberts points out, “[t]he Court first applied substantive due process to…invalidate the Missouri Compromise on the ground that legislation restricting the institution of slavery violated the implied rights of slaveholders. Dred Scott’s holding was overruled on the battlefields of the Civil War and by constitutional amendment after Appomattox, but its approach to the Due Process Clause reappeared. In a series of early 20th-century cases,…this Court invalidated state [health and safety] statutes that presented [judicially perceived] 'undue interference with liberty of person and freedom of contract.”

The Supreme Court later renounced those decisions as unwarranted under the Constitution. The dissenters in Obergefell are concerned about any judicial declaration of a fundamental right that is not clearly linked to an express constitutional provision or deeply rooted in our nation’s history. According to the dissenters, the majority opinion, in effect, proclaims the authority of five unelected lawyers to decree new rights and responsibilities that have no clear constitutional foundation.

Concern for a return to rampant substantive due process jurisprudence most probably led the Obama administration to seek approval of same-sex marriage based on an equal protection analysis rather on the declaration of a fundamental due process right.

The equal protection clause limits the government’s ability to discriminate, but, despite its name, it does not guarantee equal protection for all. Instead, it has been applied by the court to require government distinctions to be merely rational, unless they are based on classifications specifically protected by the constitution or deemed by the court to require greater justification. Strict scrutiny, which requires government action to be narrowly tailored to achieve a compelling interest, is applied to classifications that are specifically prohibited by the Constitution, such as race. Other insidious types of discrimination, such as gender-based classifications, receive heightened scrutiny, which is less demanding, and requires a substantial relationship to an important government interest.

The court has developed a four-pronged test to determine when classifications not explicitly protected by the Constitution will be given heightened scrutiny. The test considers whether there has been historical discrimination and frequent irrelevant classifications of a discrete group that has obvious, immutable or distinguishing characteristics and consists of people who are in a minority or are politically powerless. These legal constructs are subject to broad interpretation. There is no clear difference, for example, between a compelling, as opposed to an important, government interest. Nevertheless, the numerous cases that have applied these standards serve as useful examples and provide some guidelines for determining the merits of future equal protection claims.

No one knows how this new constitutional right will impact the claims of those who seek government recognition of plural marriages or oppose same-sex marriage on religious grounds. The majority opinion takes pains to restrict its ruling to two-person marriages, but its reasons for doing so are based solely on Euro-centric monogamous traditions and the court’s own idealization of such relationships. As Chief Justice Roberts reflected, “from the standpoint of history and tradi­tion, a leap from opposite-sex marriage to same-sex mar­riage is much greater than one from a two-person union to plural unions, which have deep roots in some cultures around the world [and even within parts of our own nation]. It is striking how much of the majority’s reasoning would apply with equal force to the claim of a fundamental right to plural marriage.”

Regarding religious objectors to same-sex marriage, the majority claims, “[t]he First Amendment ensures that religious organizations and persons are given proper protection,” but, as Chief Justice Roberts noted, “[h]ard questions arise when people of faith exercise religion in ways that may be seen to conflict with the new right to same-sex marriage.” The court offers no guidance on how to balance these competing constitutional rights.

What is known, is that the decision only directly impacts government action. Statutes, not the Constitution, govern most private interactions, such as those between employers and their employees, and businesses and their customers. Nevertheless, the new right to same-sex marriage renews the question of what constitutes government action and whether states may constitutionally license businesses or clergy who discriminate on the basis of sexual identity.

Finally, the Obergefell decision specifically requires states to recognize marriages performed in other states, but it does not require states to perform marriages. As of this writing, a few counties in Alabama have stopped issuing marriage licenses all together, rather than be forced to issue them to same-sex couples. Other localities may follow suit. Only time will tell what impact the Obergefell decision will have outside its immediate scope. In the meantime, advocates for same-sex marriage are celebrating as Chief Justice Roberts recommended they should, but those with a broader view are left to wonder whether this decision will lead to greater “liberty to all within its reach.”