"I Walk Slowly, But I Never Walk Backward": The Humanity of Abraham Lincoln 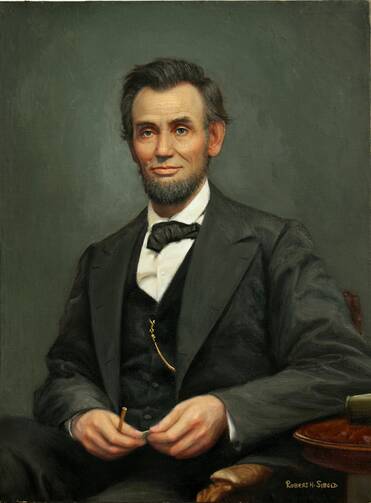 To use Abraham Lincoln’s formulation, he was born some ten score and six years ago in a log cabin in the backwoods of Kentucky—which comes out to be some 206 years ago. In historical terms, that stretch of years isn’t much; but for the ordinary person studying the man and his times, it is another world. When he was a youngster, he had scribbled some doggerel about someday being famous, not knowing “where or when” and wondering whether his life would amount to much or have any meaning after he had left this Earth. Little did he know—or could ever realize—what an impact his 56 years would have upon his times and beyond. But on this Presidents’ Day and the anniversary of his birthday (February 12, 1809) just past, there will be no fear in saying that he will ever cease to be a figure of fascination for the historian and the biographer. Perhaps the most important thing about Abraham Lincoln—and what makes him so enduring in the popular memory—was the plain fact that he was so human.

Abraham Lincoln made no apologies for being a politician; he was one and he enjoyed it—but he believed it was an honorable profession. However, he was more than that and the people in his time sensed it and knew it. Like anyone else in life, he had his detractors. During one political meeting—as the story goes—an agitated man made his way up to the front and accosted him, saying, “Mr. Lincoln, I declare, you are a two-faced man!” Thereupon Mr. Lincoln (knowing full well his well-earned reputation for looking rather homely and unkempt in appearance) looked down at his interlocutor and said, “My dear sir, if I had two faces, would I be wearing this one?” It is a rare thing to come across a human being that is seen to be intelligent, savvy, perceptive, and adaptable as well as having a sense of humor that borders on self-deprecating wit, with generous dollops of irony to spare. (Most people passing through life—if they’re lucky—possess a few of those traits, though not all of them. And without humor, the greatest of traits are just leaden anchors ready to sink the possessor—which for Lincoln, was his life preserver.) Add to that a generous portion of self-knowledge, humility and concern for his fellows and you have a rare person indeed. And yet, that what Abraham Lincoln was made of and most remarkable of all, it took some people a long time to realize that: from the Clary Grove boys out in the Illinois prairie to Mary Todd to Stephen A. Douglas on the campaign trail, to those on the other side of “Dixie.”

He was “Mr. Lincoln.” Despite his accomplishments and his securing the greatest gift his fellow citizens could bestow upon one—as President of the United States—he found himself a Chief Executive of a nation tearing itself apart over contentious issues that had never been properly dealt with since the founding of the nation. Knowing full well the problems he faced—and they would be many—he sought the office and struggled through years of hatred and war and worked to somehow make a country civil again and direct it toward a better path. But it would not be done without great suffering, not only for the nation, but for himself.

That is, perhaps, the most remarkable thing about Abraham Lincoln: that for all his obvious gifts and his great humanity, he knew what it was to suffer loss and uncertainty; and of those, he, too, had in abundance. From his earliest childhood right on up to the time he entered the presidential box at Ford’s Threatre in Washington, D.C. to meet his historical fate, he knew about personal loss and suffering. He knew it all too well: he lost his mother and his sister to death when he was just a boy. He worked hard on the frontier in order to survive. He gave his earnings to a father who didn’t appreciate and often denigrated his own son. He fell in love with a woman named Ann and lost her to death as well and when he finally fell in love again, it was to be a tempestuous courtship and marriage with a woman named Mary. He would go through the ups-and-downs of a career in law and politics. He would love all of his sons dearly though he had a somewhat distant relationship with his eldest and would endure the death of two and in the process try to keep his sanity as well as his wife’s. He cobbled a government together of his political rivals and got them to work and fought to make pthe world realize that what his country was going through was in the end to make it the “last best hope on Earth.” He was afflicted with bad dreams and melancholy; yet he sought refuge in poetry and laughter and Shakespearean plays and a good cup of coffee and a generous piece of apple pie. And he claimed anyone for a friend who gave him “a book I ain’t read.” Yet all the while he placed his faith in a “higher being” whose side he hoped he was on. Plowing through his many struggles were harder than any field he ever worked on; yet he did—he had to. For after all, this was the man who once said: “I walk slowly, but I never walk backward.”

So when he ascended those theatre steps on that April night in 1865 to sit down in his seat, amidst the draped American flags flanked by the portrait of George Washington, he did so in the hopes of enjoying a humorous play on the very evening when a disastrous Civil War was coming to its conclusion. The years of struggle he went through to bring peace for his country culminated in this moment when he hoped to finally achieve some peace for himself, only he did not know how that peace—for his country or himself—would finally come about. His work had assured his place in history; and when those shots rang out that night, Abraham Lincoln’s humanity was assured as well.

Joe McAuley is an assistant editor at America.