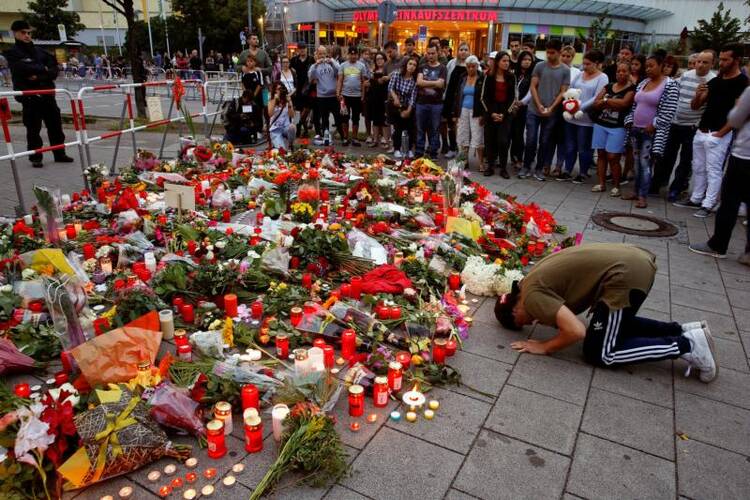 A man prays outside the Olympia shopping mall in Munich, Germany, July 23, where nine people were killed by an 18-year-old gunman. (CNS photo/Arnd Wiegmann, Reuters)

Timothy McVeigh is dead, executed for committing the largest single act of terrorism by an American citizen. Law enforcement agencies are now searching for the foreign terrorists responsible for the attacks on the World Trade Center and the Pentagon on Sept. 11. Since a significant terrorist threat exists, we must ask, Where does it come from and how far ought any government go to both defeat terrorists and protect citizens’ rights, not least their right to life?

Terrorism is about atrocity or the threat of atrocity. It is political violence against a targeted population for a political goal based upon political, social, economic or ideological grievances, which may be emotionally triggered by fear and hate. The word terrorisme is rooted in the French Revolution, where the new revolutionary government openly engaged in a brutal systematic purging of the ancien régime, its supporters and even those whose dedication to the new order seemed hesitant. This has been the model for many subsequent dictatorships of left and right. Sometimes this terror from above is covertsurrogate forces and death squads are usedgiving the government plausible deniability. Alas, state antiterrorism can look like another variation of state terrorism, because sometimes that’s what it is. Professor Michael Walzer of Princeton University reminds us that tyrants taught the method to soldiers, and soldiers to modern revolutionaries. And they have learned the lesson terrifyingly well.

Terrorism from below is committed by persons or groups to undermine or overthrow existing governments, policies or structures, or as a means to intimidate individuals or groups considered a threat. Sometimes such terrorists are themselves supported by states. The U.S. State Department regularly produces a list of states that support terrorismmost recently Libya, Cuba, North Korea, Iran, Iraq, Sudan and Syria. Such listings are always open to challenge, especially when the government does not reveal evidence to support its claimsasserting it cannot expose intelligence sources. Some political activists, like Noam Chomsky, would consider U.S. support for the Nicaraguan contras in the 1980’s as an example of state-sponsored terrorism.

Terrorists are not mad, nor are they normally criminals with a capacity for political rationalization. The political scientist Bruce Hoffmann characterizes them as violent intellectuals and altruists with deeply held political, economic, cultural or religious beliefs. Their actions are thought out andif one buys into their particular logicoften supremely reasonable. They firmly believe that their actions are done for the greater good, whether such good is defending individual rights from the powers of big government, making a socialist revolution, upholding white supremacy or furthering the dar al-Islam. The first step in combating such ideas is to seek to understand the ideologies so as to refute them.

Threats to the United States

The United States faces two major terrorist threats: Islamic terrorism and terrorism from the Christian identity-white supremacist and patriot movements. Both forms of terrorism have a number of common elementstechnical sophistication, religious fanaticism, hatred and paranoia about the new world order. They also see themselves as part of a global resistance movement (whether the white Aryan Christian race or Islam). The Islamic groups have tactical connections to like-minded movements (Hamas and Hezbollah in particular) and governments (like the Taliban in Afghanistan). The Christian identity-white supremacist-militia groups are far less coordinated, have little more than ideological solidarity with overseas groups and are less organized on a military basis.

Obviously, not every Muslim is a terrorist, nor is every white supremacist or militia member. In the past, Western society has had simplistic, patronizing or plainly ignorant attitudes toward Muslims, and these have led to serious problems. Many Muslims are anti-American. Likewise, the white far right has paranoid fantasies of an America ruled by what it calls Z.O.G. (Zionist Occupation Government), a coalition of Jews, blacks and foreign organs like the United Nations. Though one may disagree withor openly despisethese movements’ ideological positions, they have their First Amendment rights like everyone else.

In a 1996 issue of Foreign Affairs, the terrorism expert Walter Laquer stressed that the new generation of terrorists will be individuals or like-minded people working in very small groups, who will be more difficult to detect unless they make a major mistake or are discovered by accident. And Jessica Stern of the Kennedy School of Government has warned thatfollowing in the tradition of the Unabom-er, McVeigh, Aum Shunrikyo and the Osama bin Laden groupthe new terrorists could well use weapons of high destructiveness and increased sophistication. Massive car bombs, poison gas, biological weapons (and even though this is somewhat remote, low-grade nuclear bombs) could well be the weapons of terror in the 2000’s.

Because the bases and training camps of Islamic terrorist groups are largely outside the United States, counterterrorist strikes against them are possible. Using satellite tracking, military and intelligence agencies can isolate training camps in countries known to support such movements and launch sophisticated air strikes against such bases with little or no risk of alienating U.S. public opinion. On the domestic front, however, there is a healthy respect for civil liberties, even when dealing with politically extreme or culturally obnoxious groups. Neither Randy Weaver nor David Koresh could be described as exemplary citizens, yet the F.B.I. has been called on the carpet for the way it handled both the Ruby Ridge and Waco incidents.

Some experts, like the political scientist David Rapoport, have suggested that democratic states not only experience more terrorism, than tyrannies but encourage terrorism, because democratic rights do not give people the political power they expect. The result is a kind of violent resistance rooted in frustrated expectations. Should democracy then be limited or curtailed, if for no other purpose than to combat terrorism?

Some civil liberties should be revised if they result in the encouragement and breeding of terrorist monstrosities, suggests former Israeli prime minister Benjamin Netanyahu. Echoing him somewhat, the former F.B.I. director Louis Freeh has suggested that his and other law enforcement agencies should be given extended enforcement rights, including more effective legislation. Such advocacy, which united a Democratic president, Bill Clinton, and a Republican-dominated Congress, led to the Antiterrorism and Effective Death Penalty Act of 1996. It has been criticized for being politically nebulous and open to much wider use (abuse) than crime fighting. Law Professor Jeffrey Rosen argues that the A.E.D.P.A. weakens habeas corpus and federal review over state courts, radically weakens review powers over violations of federal constitutional rights and (until the recent Supreme Court decision) could be used for summary deportations of aliens and illegal immigrants.

The Siege brilliantly portrayed the risk we face. In that movie, a small cell of Islamic terrorists in New York generates a government overreactionsuspension of the rule of law, a state of emergency and detention of thousands of innocent Muslim Americans. Government might win the war against the terrorists, but would generate in the process vast anti-government animosity. This is particularly true where the terrorists’ ideologies are rooted in belief systems (whether Islam or fundamentalist Christianity) not altogether alien from those of many ordinary folk. Even where the terrorists have absolutely nothing in common with the public, such methodsin particular, harsh reactive terrorism, to use Martha Crenshaw’s evocative termmay simply lead to greater cycles of violence, counterviolence and repression. This is the lesson Israel is still learning.

How might terrorists be treated? The lawyer and political scientist Robert Gerstein suggests they should be treated using the same standards the state uses for other crimes. This has the advantage of undermining any terrorist claim to special political victim status, while protecting the law-abiding citizen from the erosion of civil liberties or the misuse of state power. Counterterrorism should be seen as merely another facet of the ongoing struggle against organized crimea struggle that, when necessary, includes such measures as carefully supervised wiretaps, undercover operations, use of informants and even paramilitary procedures to attain the objective.

An exceptional case may be carefully planned surgical strikes against terrorist bases in foreign countriescarried out only as a last resort, preferably with multilateral consent (if not collaboration). Extreme caution must be taken to avoid innocent casualties. It is hypocritical to demonize Timothy McVeigh or Osama bin Laden for their atrocities while shrugging off one’s reactive violence as collateral damage. Moral consistency is an obligation for governments as well as citizens. Such actions can also alienate leaders and citizens of foreign countries from the United States and thus give political ammunition to the terrorists and their allies.

Ultimately, the long-term solution to the problem of terrorism lies neither with state violence nor legislation, but with changing consciousness. This means not only educating people to the threat, but also shifting people’s attitudes. Terrorism emerges from a culture of violence, where violence (whether physical or psychological, social or personal) is visited upon people and people see it as the most effective solution to social or personal problems. This is the basic message of the racist, anti-Semitic, trashy Turner Diaries, the novel that gave McVeigh a blueprint for Oklahoma City: if government makes you angry, blow up a government building with ammonium nitrate and call dead children collateral damage.

Noting the close connections between violence and the sacred (to use the Canadian René Girard’s term) in many terrorist acts today, religious people should ask themselves whether faith contributes to peace or war. There seems to be a terrible equation in the world today (one going far beyond terrorism): Ethnicity + Nationalism + Deprivation + Religious Fanaticism = Slaughter. Although antireligious Communist and Nazi governments exemplified state-sponsored terrorism in the past, today the least violent societies are often those where religion is weakest. Do religious authoritarianism, dogmatism and fundamentalism contribute to terrorism? The jury is out, but the two forms of terror discussed in this article seem to suggest so.

Peace among religions would contribute to a culture of peace and tolerance, in which terrorist violence will lack fertile seeding-ground. The Christian churches and other faiths should create a culture of tolerance among people while working for social healing and reconciliation. Given our assumption that terrorists are twisted altruists, we need to encourage and build a culture in which altruism can be directed toward creative and nonviolent activism. This is our greatest challenge as a church, our greatest opportunity (together with other people and organizations of good will) to combat terrorism. A few years ago, through the work of prison chaplains, a number of the Red Brigades cadres in Italian prisons repented of their actions. Some have become committed to nonviolence. Nor should we forget, from the victim’s point of view, how Pope John Paul II forgave his would-be assassin. Though exceptional cases perhaps, they are signs that even amidst horror there is hopea hope not based on state terror.