Salvadoran priests: Government can't tell women when to get pregnant 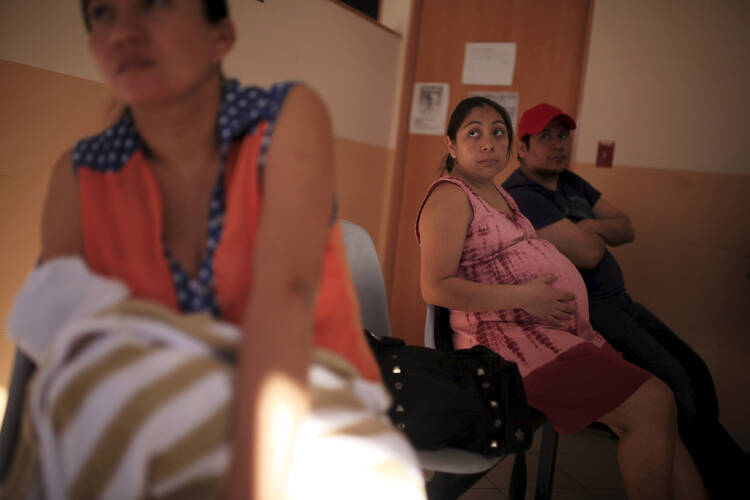 The Salvadoran bishops have made no comment on a government recommendation to women to delay pregnancy because of the Zika virus, and priests contacted by Catholic News Service gave varied responses on their reaction.

The recommendation to not get pregnant "is illusory, the state doesn't have a say regarding the private matters of the citizens, especially in regard to the procreation of children," Father Jose Antonio Ventura, pastor of St. John the Evangelist Parish in San Juan Opico, told Catholic News Service.

He added that the Salvadoran state has unsuccessfully tried to eradicate the mosquito, and their efforts should continue to focus on that direction.

"If someone asks me for advice, I would say that the important thing is to get rid of the larvae, but I can't say do not get pregnant," he added.

Health officials have urged women to postpone their pregnancies for two years, because the Zika virus can produce microcephaly, a rare neurological condition that causes smaller heads in newborns, affecting the normal development of their brain.

"So far, we have not been given any guidance by the bishops on how to deal with this situation," said Father Simeon Reyes, vicar of the Basilica of the Sacred Heart in San Salvador.

"One of the first tasks is to go to the cause, to combat the mosquito, but I would say a recommendation to postpone the pregnancies may also be appropriate," Father Reyes told Catholic News Service. He said he sees no malice or misconduct in advising all women not to get pregnant until 2018.

"The government just wants to prevent skyrocketing cases of microcephaly, once detected," he added.

He said the suggestion of the health authorities is just that, a suggestion, not an obligation, and it is for the people to decide to take it into account or not.

"As a church, we are in favor of life, as God made it clear," Father Alfonso Guzman, pastor of Calvary Parish in San Salvador, told Catholic News Service. "These are not profound measures, we can't go against God's nature."

The link between Zika virus and microcephaly was first seen in Brazil in October, and by the end of January more than 4,000 suspected cases were reported, the Brazilian government said.

The virus is transmitted by the bite of an infected mosquito, Aedes aegypti, and was first detected in El Salvador in November. Since then, more than 6,000 suspected cases of Zika have been reported; three have been confirmed. Another 22 nations have confirmed the presence of the virus in the Americas.

Health officials said that among the 122 pregnant women who were under observation in El Salvador, 11 of them have given birth, and the condition of the babies is normal.

They have acknowledged that the country does not have the resources to carry out the tests to confirm the presence of the virus in the body, but added that they are working with Nicaraguan officials to develop such a test as soon as possible.

For two decades, El Salvador, a tropical country of 6.3 million people, has fought the same mosquito, which also transmits dengue and chikungunya viruses. The warm weather generates favorable weather conditions for the mosquito to develop.

The Salvadoran government's efforts have been focused on eradicating mosquito larvae, which live in water. The government has distributed small plastic bags containing a chemical to be placed in any object that contains water in households, emphasizing the population plays a key role in destroying its environment. The Washington Post reported many Salvadorans are suspicious of government workers and will not let them into their homes to fumigate.

In San Salvador, 25 percent of households have the mosquito larvae, an amount well above the 4 percent that is considered safe by the World Health Organization.

The Ministry of Health's delaying pregnancy recommendation is not considered an official policy of the Salvadoran government. A similar measure was announced in Colombia, Ecuador and Jamaica.

The government suggestion would imply that couples should use birth control methods if they want to avoid the risk of microcephaly.

In most of Latin America and the Caribbean, condom use among sexually active women who have never been married varies from 34 percent to 74 percent, according to a 2015 study by the New York-based Guttmacher Institute.

Edgardo Ayala - Catholic News Service
Show Comments (
1
)
Comments are automatically closed two weeks after an article's initial publication. See our comments policy for more.
Stephen Barton
6 years 5 months ago
Zika virus is increasing at a very fast rate. This virus must be taken seriously and according to me people must also take due care to protect themselves from getting infected by this virus. Therefore Mosquito Control Westchester in NY is necessary to protect from mosquitoes and from dangerous viruses.