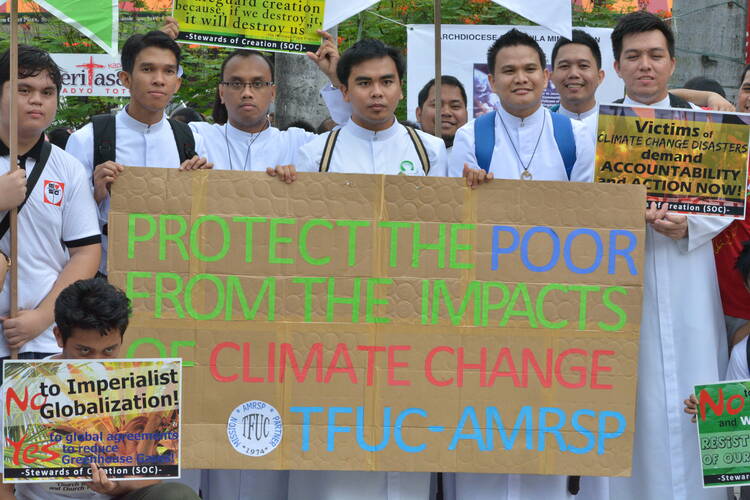 If you want to cultivate peace, protect creation. This was the theme of Pope Benedict XVI’s World Day of Peace message in 2010. These words bear special resonance today, on the eve of the upcoming climate change summit in Paris, which is shaping up to be one of the most important summit of our century.

And yet, in light of the recent mayhem and bloodshed on the streets of Paris, some wonder if the emphasis on the climate change summit is misplaced. They wonder if Paris—and the world as whole—doesn’t have more important, more urgent problems to deal with.

But this kind of thinking has it backwards. It isn’t easy to assess the death toll from climate change, but one this is certain: it is far higher than the death toll from terrorism. A comprehensive study from DARA International, an independent reseacrch organization committed to improving the quality and effectiveness of humanitarian action, claimed that climate change is already killing 400,000 a year. This figure will rise to 700,000 by 2030. And when we add in the pollution from high-carbon energy system, the final death toll rises to a staggering 6 million a year.

Plus, as recent events make painfully clear, there is a direct link between climate change and political unrest. The war in Syria has many fathers. But one of these is surely climate change. It is no coincidence that Syria suffered its worst drought and most severe crop failure in recorded history over the period 2006-10—possibly even the worst since the dawn of agricultural civilization.

To take another example: in the Sahel region—a dry zone in West Africa between the Sahara and the tropics—the encroaching desert is leading to clashes between farmers and pastoralists, which takes on an unfortunate religious dimension. This collision combined with dimming economic prospects provides fuel for terrorist groups like Boko Haram. And on the other side of the continent, the drying lands in the Horn of Africa are also proving to be breeding grounds for violence, terrorism and instability.

History teaches us a valuable lesson in this regard. Over the course of human civilization, shifts in climate have been associated with conflict, societal disruption, and even societal collapse. The experience of the ancient near east, or the Mayan empire, offers many cautionary tales. As does more recent history. In his magisterial Global Crisis: War, Climate Change and Catastrophe in the Seventeenth Century, the historian Geoffrey Parker traces the upsurge in conflict in the 17th century—50 revolts, revolutions and civil wars between 1618 and 1688—to the deep chill that enveloped the northern hemisphere at this time. And when these kinds of tensions arise, religious tolerance is often the first casualty. Religious historian Philip Jenkins links the dramatic deterioration in relations between Christians, Muslims and Jews in the 14th century to climatic shifts across Eurasia.

Yet this argument opens itself up to an objection—the notion that past is not prologue, that our modern societies are far more resilient than in the past, meaning that we can cope with climatic shifts without resorting to conflict and chaos.

This objection does not hold, for two important reasons.

The first is that the regions of the world most vulnerable to climate change are regions already prone to instability. So far, the burning of fossil fuels has increased global temperatures by about 1 degree Celsius since the industrial revolution. It is not surprising that the first regions to feel the full force of climate change are drought-prone regions like the Sahel, the Horn of Africa, and Mediterranean basin—southern Europe, North Africa, and countries like Turkey, Syria, Israel and Jordan. Clearly, there is a huge overlap between political and climatic hotpots. This is a tinderbox that could be set off by the slightest flame.

And yet climate change will bring no mere flame. It will bring a full-scale conflagration. If we continue on this path, we are on course for a rise in global mean temperatures of 4-6 degree Celsius over the pre-industrial average by the end of this century. At that level, the Middle East, for example, would be no longer be fit for human habitation. With more severe droughts, flooding, heat waves and storms, instability will undoubtedly spread and mushroom.

Consider the effects of severe water shortages on the Indian sub-continent, should the all-important mountain glaciers retreat. Consider the implications of massive crop failures across Africa or the displacement of millions of people by torrential monsoons in places like Bangladesh. These are but a few examples. All over the world, tensions are bound to magnify. The current migration crisis might prove a pale precursor to what lies ahead. This is a fire that could prove impossible to put out.

This brings us to our second objection to the argument against heeding the lessons of history. Over the past 10,000 years, we have been living in a period called the Holocene. This is a period of remarkable climatic stability for planet earth, and its “garden of Eden” conditions laid the groundwork for human civilization and human flourishing. So far, all climatic shifts in human history took place within this safe operating space of the Holocene.

But this is now changing. Scientists—led by Johan Rockstrom and his colleagues at the Stockholm Resilience Center—are telling us that we are on poised to breach some vital planetary boundaries, and leave behind the comfortable conditions of the Holocene for a world that is far more dangerous and uncertain. As one key indicator of this planetary regime shift, the concentration of carbon dioxide in the atmosphere has reached a level not seen in 3 million years. At that time, there were no humans on planet earth, and the global mean temperature was an astounding 7 degrees Celsius warmer than today.

The implication is clear. As we leave the safe operating space of a resilient and stable planet, we are on course for a perilous future. The minor climatic shifts seen over the course of human history are nothing compared to what is coming—if we fail to act.

This brings us to a basic conclusion: those who seek to combat terrorism while belittling concerns about climate change are setting themselves up for failure—failure on a massive scale. To borrow an unfortunate phrase, this is the mother of all contradictions.

Yet we must not fail. This is a moral imperative of the highest order. It is no accident that religious voices have been some of the loudest voices demanding action on climate change. This year, Pope Francis issued his groundbreaking encyclical, “Laudato Si’,” which contained a passionate plea to protect our common home. And Buddhist, Hindu, Jewish and Muslim religious leaders and scholars have also issued important statements on climate change in recent months. This is an issue that unites the world’s religions, and world leaders must take these entreaties to heart.

In thinking about the stakes, we can once again appeal to the lessons of history. Almost a hundred years ago, world leaders gathered in Paris to forge a new international order out of the ruins of the First World War. They were not successful. They chose narrow national interests over the global common good, and the result was three decades of economic misery, political tyranny and ruinous war. It was only after the Second World War that leaders finally opted for multilateral cooperation, which paved the way for an era of greater peace, security and prosperity.

This is the choice facing leaders today—the choice between 1918 and 1945. And Paris is once again in the global spotlight. Leaders must make the right choice, because the consequences of failure are at least as grave as in 1918. They must take to heart the prophetic words of Pope Benedict XVI: if you want to cultivate peace, protect creation. Because the stakes are nothing less than peace on earth.

Anthony Annett
Show Comments (
1
)
Comments are automatically closed two weeks after an article's initial publication. See our comments policy for more.
JR Cosgrove
6 years 5 months ago
Anyone who makes the connection between recent climate changes due to possible warming and and any war, is someone who can not be taken seriously. They are an ideologue who exaggerate the effects of the mild warming we have had in the last 40 years. During that time, world food supplies have doubled and we are at the point where we are burning food for electricity. Climates have been changing since the beginning of time and will continue to change for a variety of reasons. What should take place is a serious discussion and not polemics such as this article.