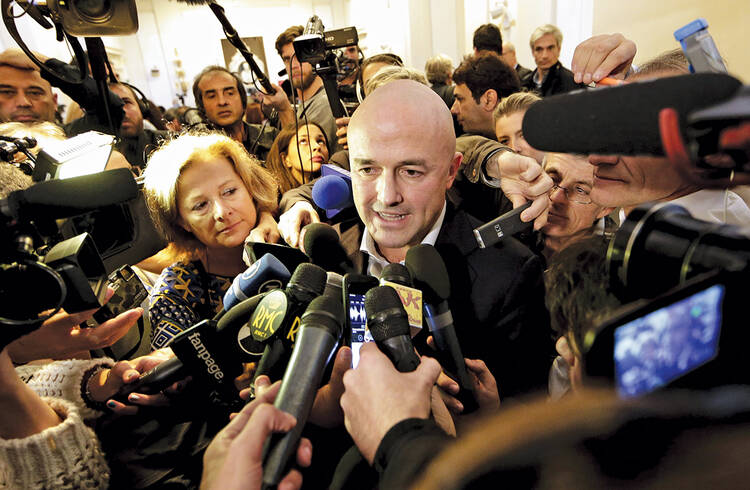 A Vatican judge has ordered five people, including a Spanish monsignor and two journalists, to stand trial in connection with the leaking and publication of documents about Vatican finances.

The criminal trial was scheduled to begin Nov. 24 in the small Vatican courtroom behind St. Peter's Basilica.

Those called to trial are: Spanish Msgr. Lucio Angel Vallejo Balda, secretary of the Prefecture for the Economic Affairs of the Holy See; Francesca Chaouqui, a member of the former Pontifical Commission for Reference on the Organization of the Economic-Administrative Structure of the Holy See; Nicola Maio, who served as personal assistant to Msgr. Vallejo Balda when he worked on the commission; Gianluigi Nuzzi, a journalist and author of "Merchants in the Temple"; and Emiliano Fittipaldi, journalist and author of "Avarice."

Announcing the court date Nov. 21, the Vatican said Msgr. Vallejo Balda, Chaouqui and Maio are accused of forming an "organized criminal association" with the aim of "committing several illegal acts of divulging news and documents concerning fundamental interests of the Holy See and (Vatican City) State."

Under the Vatican criminal code, it is a crime to take, distribute and publish confidential documents.

Fittipaldi and Nuzzi, the Vatican said, are accused of "soliciting and exercising pressure, especially on (Msgr.) Vallejo Balda, in order to obtain confidential documents and news," which they then used for their books. The books went on sale in early November.

The Vatican said that if any of the five are not present Nov. 24, they would be tried in absentia.

Fittipaldi and Nuzzi both reacted on their Twitter accounts and in interviews by insisting the Vatican law being used in the case and the decision to bring them to trial is a violation of freedom of the press. Nuzzi has been using in his Tweets a hashtag in Italian that translates as #NoInquisition.

Fittipaldi said, "This isn't a trial against me. A free press is on trial."

Both Fittipaldi and Nuzzi wrote books illustrating what they claim is serious financial mismanagement in the Vatican; much of the evidence they cite allegedly comes from documents written by or for the commission that Pope Francis established in July 2013 to reform Vatican financial practices. Msgr. Vallejo Balda and Chaouqui were members of that commission.