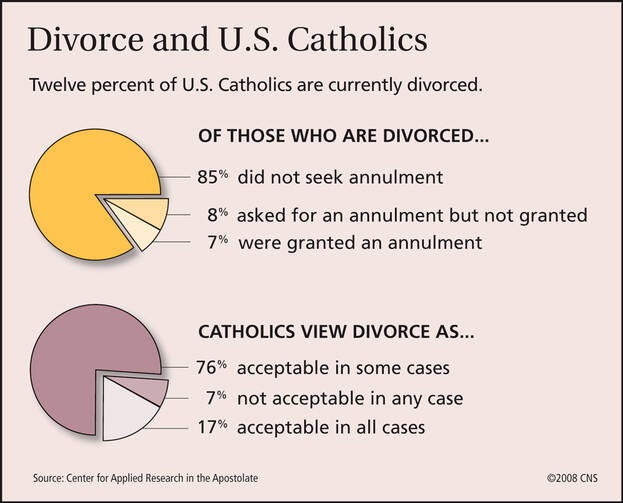 Amid rising expectations that the Catholic Church might make it easier for divorced and remarried members to receive Communion, the Vatican’s highest doctrinal official reaffirmed church teaching barring such persons from Communion without an annulment of their first, sacramental marriage. But Archbishop Gerhard L. Müller, prefect of the Congregation for the Doctrine of the Faith, acknowledged that many Catholics’ first marriages might be invalid, and thus eligible for annulment, if spouses had been influenced by prevailing contemporary conceptions of marriage as a temporary arrangement.

The archbishop’s words appeared in a 4,600-word article published in L’Osservatore Romano on Oct. 22.

Speculation about a change in practice has grown since Pope Francis told reporters accompanying him on his plane back from Rio de Janeiro in July that the next Synod of Bishops would explore a “somewhat deeper pastoral care of marriage,” including the question of the eligibility of divorced and remarried Catholics to receive Communion. Pope Francis added at the time that church law governing marriage annulments also “has to be reviewed, because ecclesiastical tribunals are not sufficient for this.”

Such problems, he said, exemplified a general need for forgiveness in the church today. “The church is a mother, and she must travel this path of mercy, and find a form of mercy for all,” the pope said.

The Vatican announced on Oct. 8 that an extraordinary session of the Synod of Bishops will meet from Oct. 5 to Oct. 19, 2014, to discuss the “pastoral challenges of the family in the context of evangelization.” The announcement of the synod came amid news that the Archdiocese of Freiburg, Germany, had issued new guidelines making it easier for divorced and remarried Catholics to receive Communion.

Archbishop Müller’s article was published in a German newspaper in June. Its republication in the Vatican newspaper seemed intended to temper the expectations of change that these events have excited. The archbishop acknowledged that a “case for the admission of remarried divorcees to the sacraments is argued in terms of mercy” but wrote that such an argument “misses the mark” in regard to the sacrament. He said the “entire sacramental economy is a work of divine mercy, and it cannot simply be swept aside by an appeal to the same.”

The prefect’s article also addressed the Eastern Orthodox practice of allowing second or third marriages even when the first is sacramentally valid, a practice Pope Francis mentioned when speaking to reporters in July. “This practice cannot be reconciled with God’s will, as expressed unambiguously in Jesus’ sayings about the indissolubility of marriage,” the archbishop wrote, noting that it thus poses an obstacle to ecumenism.

“The church cannot respond to the growing incomprehension of the sanctity of marriage by pragmatically accommodating the supposedly inevitable,” he wrote. “The Gospel of the sanctity of marriage is to be proclaimed with prophetic candor. By adapting to the spirit of the age, a weary prophet seeks his own salvation but not the salvation of the world in Jesus Christ.” Archbishop Müller also ruled out the argument that “remarried divorcees should be allowed to decide for themselves, according to their conscience, whether or not to present themselves for holy Communion.

“If remarried divorcees are subjectively convinced in their conscience that a previous marriage was invalid, this must be proven objectively by the competent marriage tribunals,” he wrote.

From AP, CNS, RNS, Staff and other sources
Show Comments (
3
)
Comments are automatically closed two weeks after an article's initial publication. See our comments policy for more.
Mike Evans
9 years 3 months ago
We have made the process of seeking an annulment an adversarial one in most dioceses. The application is seriously delayed at the outset, then shifted from advocate to applicant to respondent to witnesses (who rarely know very much about intimate details) back to advocates then to a tribunal of priests then to the archdiocese for review and finally, after a minimum of 2 years, the applicant might hear the outcome. The entire process is legalistic and not pastoral, seeks proofs that are not easily available, and tortures too many applicants and their pastoral ministers with trivial and negative concerns that cast doubt on the veracity and motives of both. Clearly the church errs on the side of moral indignation and refuses to take people at their word. Mercy is not on their lips and the legalistic "latin sounding" documents are both intimidating and impossible to comprehend. People divorce for good reasons. Are they to remain in limbo and yearning for companionship and love for the rest of their lives? Cannot the church bless the new union as salvific and even part of the Lord's plan?
Paul Ferris
9 years 3 months ago
Catholics who have remarried without annulment should go to communion. As the early apologist,Clement of Alexander wrote, the church is a hospital for sinners and communion is the medicine of mercy. That is why all Latin Catholics pray before communion, "Lord I am not worthy that you should come under my roof but only say the word and my soul shall be healed." Catholics who have been harmed by the annulment system must show mercy and forgiveness to the unmarried priests and bishops who promulgated this policy. Pray for them at communion.
Michael Barberi
9 years 3 months ago
In light of Pope Francis's recent statements and his call for the up-coming Synod of the Family, there was hope that the Church would find a way to responsibly reform at least one of the issues plaguing the Catholic family today. Given the wet blanket that Archbishop Muller has cast over the issue of divorce and remarriage, what will be the verdict on: contraception, artificial reproductive technologies, same-sex unions, and frozen embryo adoption? Will this new Pope and all the Bishops merely reconfirm the Church's long standing teachings in these areas? Given this new revelation by Archbishop Muller, I think so. Certainly, Most, if not all Christian Churches, except the RCC, interprets Matt: 5:27-32 to allow divorce and remarriage in cases of adultery: "But I say to you that anyone who divorces his wife, except on the ground of unchaste, causes her to commit adultery; and whoever marries a divorced woman commits adultery". In ancient times the term "unchastity" meant many immoral things but the most egregious was adultery. At the end of time, those couples who are divorced and remarried will stand before God and be judged. It is hard to imagine that those who are non-Catholic Christians or Jews (who allow divorce and remarriage) will be condemned as the RCC believes Catholics will. The answer is not: if you don't like the RCC then join another Church for there is only one God and one judgment. This does not mean that there cannot be disagreements between Christian Churches, but it is one thing to believe or not that the Eucharist is the real body and blood of Christ or a symbol of it….or that the Holy Spirit proceeds from the Father and not from the Father and Son….and quite another to proclaim that to partake of the Eucharist by divorced and remarried Catholics is a mortal sin and a sacrilege condemning those to eternal damnation (regardless of circumstances). It is also perplexing that a Catholic who had an abortion can be forgiven and receive the Eucharist, but not the divorced and remarried. A serial killer is not denied the sacrament of reconciliation or Eucharistic reception either. Note that the same organization said this: "According to a study conducted in 2007 by Georgetown’s Center for Applied Research in the Apostolate (CARA), approximately 23 percent of Catholic marriages end in divorce. That same study concluded that at any one time, 13 percent of the adult Catholic population in the pews is single as a result of separation or divorce. About the same percentage is divorced but remarried or living with someone." My question is this: how many Catholics are divorced and remarried but have joined other Christian Churches or who are Catholic in name only and are not registered in any Catholic Church? If you add these lost Catholics to the divorced population, the percentage will be far greater than 23% and likely closer to the general divorce rate. This new about the divorced and remarried does not give me much hope, I am sad to say.