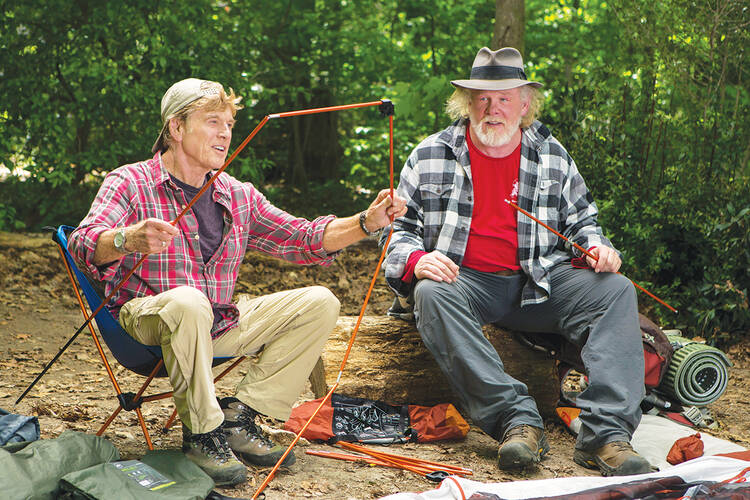 Some people reach a crossroads in their spiritual life and go on a religious retreat. Others accelerate their drinking. Others still might change jobs, mates or majors or buy a gym membership (and even use it). The thing is, the moment for a psychic tune-up doesn’t come on any schedule. It arrives when it must, whether we are 16 or 60.

Keeping that in mind, A Walk in the Woods—which, as has been noted, is a road movie without a road—should have universal appeal, despite the fact that the guys who carry us through it can barely carry themselves and are on the distant side of 60.

Robert Redford has been a major movie star at least since 1969 (“Butch Cassidy and the Sundance Kid”). He is an Oscar-winning director, producer, ardent environmentalist, film festival macher and, lest we forget, actor. (“All Is Lost,” the 2013 drama that featured his virtually wordless, one-man performance, was a reminder that he has always had chops.) Nick Nolte has enjoyed a long bout with stardom, too, probably since TV’s “Rich Man, Poor Man” (1976), and thanks to having led an apparently more libertine lifestyle than Redford’s, is easily the older actor’s match in wheeziness. (If Nolte wandered into your campsite at night, you might instinctively reach for the bear repellent.)

It should be noted that the central activity of “A Walk in the Woods,” ably directed by Ken Kwapis (“The Office,” “Big Miracle”) and majestically shot by the veteran cinematographer John Bailey, is no stroll around the park. Based on travel writer/humorist Bill Bryson’s memoir of 1998, it involves the author’s post-midlife crisis and his decision to hike the Appalachian Trail—a glorious piece of real estate that stretches nearly 2,200 miles through 14 states, from Georgia to Maine, requires six months to travel in its entirety, is visited by three million people annually and was completed in 1937 (and is part of the National Park System, just FYI). Redford had been trying to bring the book to the screen since 2004 and originally intended it to be the third collaboration between himself and Paul Newman (who died in 2008). He is considerably older now than Bryson was when he made the trek. The trek probably seemed like a crazy idea in the ’90s. It certainly does now.

Mrs. Bryson agrees. Played by Emma Thompson with her English propriety, she thinks the whole idea is horrifying and gets her husband to agree that if he is going to do it, he is not going to do it alone. Which is a shrewd move, because Bryson gets turned down by everyone he invites along (it’s a six-month commitment, c’mon). Enter Stephen Katz (Nolte), someone Bryson never even thought to call, but who heard secondhand that Bryson was looking for a traveling companion. A recovering alcoholic, untrimmed, unfit and generally unpresentable, Katz had a falling out some decades earlier with the well-put-together Bryson, who seems close to his temperamental opposite. As a road show, however, they click.

While Nolte plays a sort of mournful reprobate (Philip Roth fans might be reminded of Mickey Sabbath), Redford’s performance is more complicated. At the beginning of the film, whether the Bryson character is doing an uncomfortable TV interview or just walking around his suburban house (he’s a recent ex-ex-pat who’s been living in the United Kingdom), he seems clearly unsettled, out of his element, at loose ends. The decision to walk the Appalachian Trail is a desperation move, perhaps, but not unwise: As soon as Bryson gets outdoors and away from a particular strain of civilization, he relaxes. So does the viewer.

You can’t escape people entirely, though, and since “A Walk in the Woods” has almost no story—two guys basically walk from here to there—what they encounter along the way, and whom, make for the same kinds of episodes that traditionally constitute any picaresque, or buddy movie, or road film. (This includes Emilio Estevez’s’ 2010 film “The Way,” about pilgrims on El Camino de Santiago, a film with thematic similarities to “Walk” but fewer jokes.)

Bryson’s preparations for the hike involve a trip to an outdoor store, where the hiking “pro” (the consistently funny Nick Offerman) knows so much about the minutiae of camp gear it’s comically absurd, and drives home just how in over his head Bryson really is. Very early on, after he and Katz hit the trail, they encounter a know-it-all hiker (“Daily Show” regular Kristen Schaal) whom they can neither get away from nor get to shut up. Can they ditch her? Only in the most awkward manner possible. Katz has a run-in with the jealous boyfriend of a woman he hits on at a laundromat; Redford has a flirtation with a motel keeper (Mary Steenburgen), whose mother is suffering from dementia and who seems trapped in her little bubble of hospitality, watching the world hike by.

It’s not heavy; it’s not wildly significant. But “A Walk in the Woods” has a redemptive tone, a gentle lesson about aging and limitations and never giving up despite any required climb, uphill or otherwise. It’s also intended to serve the allegedly underserved audience of people over, say, 40 (50?) and who should really think twice before deciding to embark on any 2,200-mile constitutional, no matter how beautiful this movie makes it look.

A different kind of quasi-bucolic landscape provides the backdrop to Z for Zachariah, a post-apocalyptic scenario mercifully free of zombies but rich in intellectual stimuli and biblical allusions. The setting serves as a miniature Eden, a valley that, for meteorological reasons or elevation or whatever, has been spared the radiation that seems to have destroyed much of the world outside. The only survivor we see, at first, is Ann (Margot Robbie), who has grown up on the farm where she lives (the setting seems to be West Virginia) and makes resourceful use of what has been left behind by the dead and missing. She plays a small organ in the church her father built and where he preached. The others in her family left to help during the crisis. They never came back.

Directed by Craig Zobel and based on a generally fine screenplay by Nissar Modi, “Z for Zachariah” begs our indulgence about a lot of things, as most films in its genre do. Robbie, who made such a splash in “The Wolf of Wall Street” and might have gotten typecast because of it, is an entirely different character here, absurdly good and ridiculously beautiful. A friend of this reviewer always poses the same question to the simple, small-town girls on screen, namely, “Didn’t anyone ever tell you to leave town and try your luck in Hollywood?” Robbie’s presence is a little like that, but she overcomes it to a great extent through what is an almost old-fashioned portrayal of a girl who’s lost everything but her faith.

Arriving on the scene in what looks like a spacesuit is Loomis (Chiwetel Ejiofor), who as luck would have it is a research engineer who happened to be in a government bunker when the blast (or whatever it was) took place. Loomis knows how to get things back in working order: he needs to create a huge water wheel to pump from a nearby falls and generate electricity. He just needs additional muscle, which arrives courtesy of Caleb (Chris Pine), who happened to be in a coal mine when the disaster took place. Caleb is white, Loomis is black; both are attracted to the fair-skinned Ann. The conflicts to be might as well be posted on a billboard.

At the same time, “Z” is dramatically sound—Robbie, in particular, is wonderfully understated and gentle and Ejiofor (“12 Years a Slave’) is consistently one of the best actors currently working. And the story is the kind that tries the soul, forcing the viewer to question what he or she would do if, heaven forbid, such a fate would befall them. We needn’t imagine disasters, they are all around, from civil wars in Central America to 3-year-olds washing up on Turkish beaches. But the prospect of such an epic calamity as occurs in “Z for Zachariah” poses different kinds of questions. Would our belief system be reinforced or demolished? Would the tasks, not just of surviving but of rebuilding, be more than one could stand? “Z for Zachariah” is an entertainment, of course. But there’s nothing wrong with entertainment that also probes the mind and heart.

John Anderson is a film critic for The Wall Street Journal, TIME magazine and Newsday.