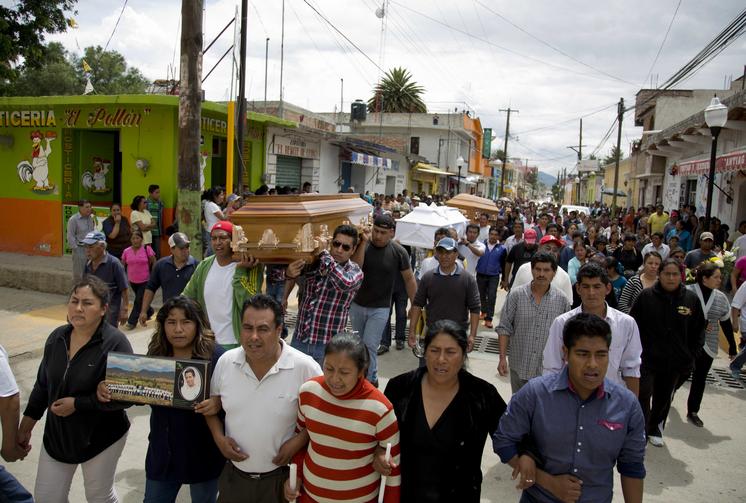 Mexican authorities and protesters on Monday traded accusations of responsibility for weekend clashes that left eight people dead and more than 100 wounded in the restive southern state of Oaxaca.

Federal Police Chief Enrique Galindo, speaking on local Radio Formula, said few teachers were involved in the violence and attributed it to other, unspecified "radical groups."

However, the radical teachers' union involved in the protests denied that and alleged that police infiltrators were to blame.

The clashes are the latest flashpoint in an ongoing battle for control of public education in Oaxaca, where the union is resisting government attempts to implement national education reforms passed under President Enrique Pena Nieto.

Galindo said things initially went smoothly Sunday when officers moved to reopen the highway around 7 a.m. after it had been blocked by protesters. Traffic flow resumed for about two hours following dialogue between unarmed police and demonstrators from the National Coordinator of Education Workers, or CNTE.

But later the crowd swelled to about 2,000 protesters, some of them armed with gasoline bombs and powerful fireworks, Galindo added. When police confirmed gunshots, he ordered armed police to move in.

"It was a radical change of scene," Galindo said. "It was practically an ambush."

Late Monday, Oaxaca state prosecutor Joaquin Carrillo said in a news conference that seven civilians died of bullet wounds, none of them teachers. One more person died of wounds he suffered while handling one of the powerful fireworks that protesters used against police.

More than 100 people were wounded before police pulled back, Galindo said, adding that "staying in Nochixtlan would have brought more serious consequences."

At the news conference, Galindo showed photos of a police helicopter that had been hit by bullets. He said three federal police officers were still being held—apparently by townspeople or protesters—in Nochixtlan.

The CNTE, in turn, said those killed were teachers and members of other social groups that support them, adding that 20 people were missing. The union denied the presence of "radical groups" and said police had infiltrated their movement. It demanded that Oaxaca Gov. Gabino Cue resign.

"This movement is not going to stop," said union member Juan Garcia.

Galindo said he did not know if police had fired any of the fatal gunshots. Video filmed by The Associated Press showed at least one officer firing a gun several times, though it was unclear if he was a federal or state agent.

About 100 to 150 protesters maintained the roadblock on Monday in Nochixtlan, where about a half-dozen burned vehicles littered the area and there were no police in sight.

Cue said the blockades had caused serious economic problems in the state, including food shortages.

The federal attorney general's office said it would assist Oaxaca prosecutors in investigating how the shooting broke out. Galindo said officials would try to resume talks with the teachers.

The protesters are demanding the federal government sit down to negotiate the educational reform; to date teachers who have refused to take evaluation tests have been fired. The radical teachers' union in Oaxaca says local conditions in the heavily indigenous state should be taken into account in the testing.

On Monday afternoon, Oaxaca city's graceful main plaza was hidden under a sea of tarps and small tents set up by protesters. Garbage sat in heaps around the perimeter, and the cafes that surround the square and would normally be packed with tourists were empty.

Anarchist graffiti covered the facades of historic buildings on streets radiating out from the zocalo. The tall glasses windows of a bank a block from the square were all broken and the ATMs just inside the front door were vandalized and spray painted with anarchist logos.

Mexico's National Human Rights Commission reported that journalist Elpidio Ramos Zarate of the newspaper El Sur del Istmo in Juchitan de Zaragoza, Oaxaca state, was killed Sunday, but it was not immediately clear if it was related to the protests.

Ramos Zarate had reportedly been taking pictures of some looters in Juchitan cleaning out store shelves. The Inter American Press Association quoted the news manager of Ramos Zarate's paper as saying he had been threatened by masked men who demanded he not cover the protests and looting.

Teacher protests have been going on for years in Oaxaca. A decade ago, the union launched a six-month takeover of central Oaxaca city that only ended after police stormed the barricades.

Mexico's education reform aims to wrest control over struggling schools from unions that have often had sole power over hiring, firing, promotions and budgets. The CNTE strenuously opposes a new system of teacher evaluations and rules allowing for educators to be dismissed if they miss too many schooldays.

Federal prosecutors accuse union leaders of setting up an illegal financial network to fund protests and line their own pockets. They allege the scheme operated in 2013-2015, when the union effectively controlled the payroll of Oaxaca's teachers.

Following the arrest of some if its top leaders, the union called for a revolt.