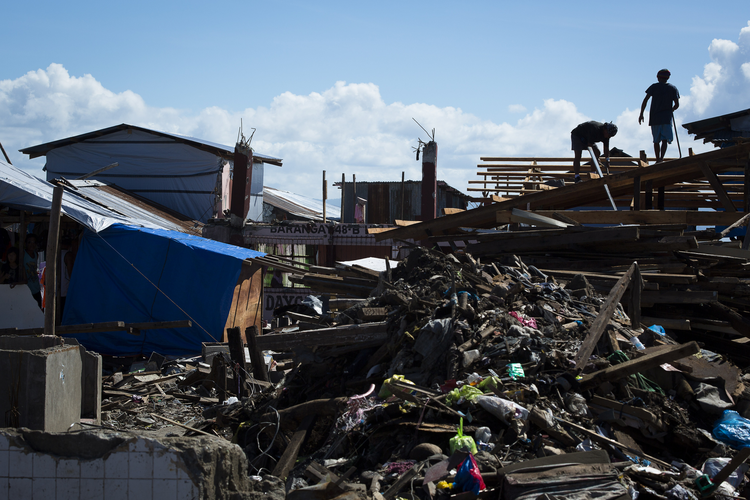 A small sign—a sheet of paper printed from a computer—announces "We're now open" on the front door of Matthew's Meat Shop on Real Street, across from some of the most devastated communities in this typhoon-ravaged city.

Marlon Tumenbang, 39, was out of business for nearly three months. His was one of hundreds of shops and thousands of people swamped by Typhoon Haiyan's overwhelming storm surge and 195-mile-an-hour winds Nov. 8.

As sunshine streamed through the front windows of his renovated store in early February, Tumenbang had high hopes that business would eventually return to normal.

"Some people do not know we are open yet," he told Catholic News Service, a week after stocking new coolers with pork products and eggs. While he has seen some familiar customers, Tumenbang wonders how many will eventually return.

Just two blocks away, in the communities along Cancabato Bay inundated by Haiyan, residents continued to dig through the rubble, salvaging what they could and expecting that they may find the bodies of some of those still missing.

Tumenbang said the renovation of his store took weeks to complete because supplies were hard to come by. It cost him nearly $4,500, a small fortune in a culture where insurance is nonexistent. He said he wants to serve the people who remain in the area near the Redemptorist-run Our Lady of Perpetual Help Church.

The businessman's focus had turned to his family's home above the shop. Haiyan's winds tore off part of the roof. The apartment remained exposed to the elements.

Tumenbang was among the fortunate because he was able to rebuild in a relatively short period of time. Elsewhere in the city, the rebuilding effort has been slowed by sporadic deliveries of building supplies that drive up prices beyond the means of most Filipinos, homeowners told CNS.

Small businesses such as Tumenbang's are significant to the economy of Tacloban, a city of 224,000 residents about 360 miles southeast of Manila. Businesses can rely on steady sales in a city with four major universities, a few smaller colleges and provincial government offices where employment remains steady.

However, across the city, many buildings remain unusable and electrical service is spotty. Some downtown business owners have brought in generators to power up their stores.

Three months after the typhoon a few, such as Electronic Computer Data Systems owned by Eddie and Katherine Uy, had power but had yet to initiate repairs. At the Uys' store, customers entered through the frames that once held two plate glass windows rather than through the door. An armed guard kept watch around the clock.

On the northern edge of the city, residents in poor shantytowns that line the shore continued to salvage whatever they could in an attempt to rebuild. Several large cargo ships that were torn from their moorings during the storm remain grounded, and residents have started rebuilding with scraps of lumber and salvaged metal. They have ignored signs posted by the city warning residents not to rebuild within 130 feet of the shore.

Assistance from the Philippine government under President Benigno Aquino III has been limited. Many residents say the city is being snubbed because Tacloban's mayor, Alfred Romauldez, is the nephew of Imelda Marcos, the glitzy former first lady of the Philippines and the wife of former dictator Ferdinand Marcos. Imelda Marcos grew up just south of town and is still revered by many locally.

Adding to the complex political situation, the mayor's uncle, Marcos Romauldez, is widely considered to be the man who ordered the assassination of Aquino's father, Benigno "Ninoy" Aquino II, a vehement opponent of the Marcos regime.

Nearly 44 percent of the country's more than 6,200 deaths from Haiyan were in Tacloban, and more than 700 remained missing months after the disaster.

Some of the worst devastation extends along 20 miles of shore on Leyte Island. Joe Curry, who leads Catholic Relief Services' operations in the Philippines as country representative, said the damage is far worse than anything the agency has faced in the island nation. He expects it will be years before the region will recover.

"This is something we could not reference from prior experience," Curry told an international delegation in Manila in early February as they were preparing for a tour of the typhoon zone.

As the agency transitioned from emergency response to recovery, CRS staffers continued to be astonished by the number of people in need, Curry said. The U.N. estimated that 1.1 million houses were destroyed or damaged by Haiyan, displacing about 4 million people.

CRS has employed hundreds of people who lost their homes in cash-for-work programs, clearing debris in an effort to find enough space for the construction of temporary shelters. The need for space in rural areas is less crucial, and temporary shelter construction has begun in earnest in a few locales.

Even with the effort, the need remains greater than any one agency can meet. Curry said that his agency is reviewing how it responds to major storms especially because climate change appears to be a factor in the number of storms and their intensity.

Back on Real Street next door to Our Lady of Perpetual Help Church, Allen Abanilla was packing a few more of his family's possessions to move to a second apartment he rents closer to his small food store in the seriously damaged Gaisano Mall. Abanilla said his family escaped flooding from the storm surge, but that the wind ripped open the roof, allowing rain to pour in for hours. The landlord had not begun repairs.

Abanilla said since he reopened his business in early January, sales were running about half of what they were before the storm. He said he would give it six months to see how it goes. If things do not improve, he plans to look for work, perhaps in another city.

He called on the Philippine government to respond and to put political differences aside.

"I'm hoping they will do their job to put us into a normal situation," Abanilla said, "because eight months from now it will be typhoon season."