Supply and Demand: One man reflects on a drug war—and market—without end. 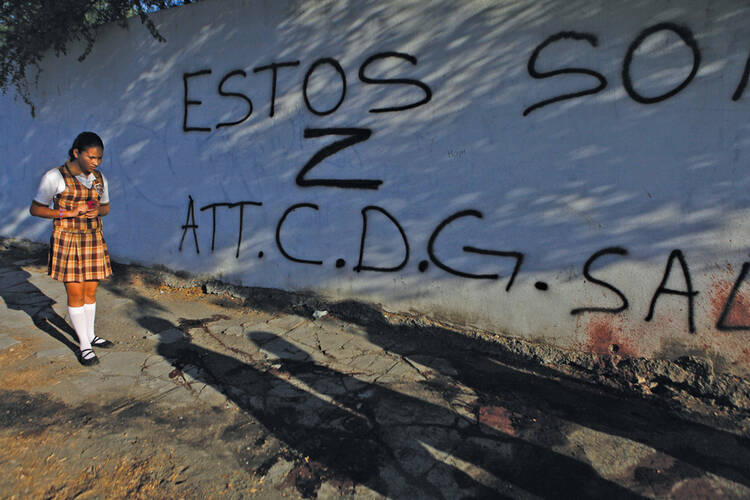 ‘First and most important is to think business and not crime,” he tells me. “The Zetas and members of the other drug corporations commit crimes—lots of them—but their raison d’etre is to make money, the same as any other business. And they want to do it as efficiently as possible.”

As he spoke, Gonzalo Osorio twitched his shoulders and patted his more than ample paunch. His real name, he cautioned, “might not be” Gonzalo Osorio. In contemporary Oaxaca one takes care to not reveal too many personal details. His connections with the Zetas were “peripheral”—how peripheral he wasn’t willing to elaborate—but he’d had dealings with some of them and knew what he could and couldn’t say.

“So thinking ‘business not crime’ in order to understand what is happening in southern Mexico, one focuses on the product. The product is drugs—cocaine, marijuana. Like pulpwood, like strawberries, like cotton, it originates with the soil—a farm product. One can’t grow oranges in Canada or oak trees in the Sahara: You have to grow them where they grow best, verdad?

“Adormidera [the poppy], marijuana, grow best in Mexico. Colombia. Peru. So in those places you grow them. Then what? The locals buy what you harvest? Maybe a little, but business—everybody knows this—responds to demand. The demand comes first, then the supply,” he explains. “One could grow begonias, prickly pears, pine nuts instead, but....

“See, this is where business comes in. The Zetas are not farmers, they’re wholesalers. That’s their business. Very profitable. Like any wholesalers, they have to get their product to consumers.

“Where are the consumers? In Oaxaca? In Mexico City? Pues, unos pocos. But remember demand; demand comes first. The demand is in the U.S. So it is the job of the wholesalers to get the product from the farmers to the United States.

“Now we’re talking business here, demand and supply, not legal/illegal. Business has no morals. You spend US $100 on a whore, you spend $100 on a Communion service; either way it’s a transaction—you get what you pay for.” The consumers creating the demand want the product and they have the cash to buy it, he says, like in a normal market.”

“But in this case the product is illegal,” Osorio says, “so you can’t do your business like Walmart out in the open, you have to do it in the shadows. You have to organize, really organize, or the cops will steal your product. Or another wholesaler will steal it.” In those situations, the Zeta wholesalers can’t exactly take their grievances to the police. “So you have to become your own law and order. Like any business, eliminate the competition.”

That is where, he explains, the Mexican State of Oaxaca comes in. It is the pathway between Central America and key distribution points north: Acapulco, Veracruz. “Now anybody can slip a few grams through, but tons? Mano, te digo for that you need organization. The trucks need not to be stopped. The planes need not to be inspected. Not something a few bloodthirsty teenaged Zetas can do by themselves: We’re talking big business.

“In business you have to pay in order to operate: licenses, taxes, fees, right of way, salaries,” Osorio says. “The Zetas are a business: They have to pay drivers, pilots, mechanics, lookouts—over 800 kilometers and the Zetas know every kilometer. They know every cop by name, every gas station owner, every restaurant, hìjole!, every teenage prostitute.

“They have to pay, but they have to protect themselves. How? Ay mano! Everybody knows! Say the wrong thing and you’re dead. Fail to pay protection and you disappear.

“Ya ves, that’s another thing about business. You’re never content. So you branch out. You got the money, the manpower, the control, you take over small businesses, fringe businesses. Bars, taxi companies, repair shops. You see an opportunity, you jump at it.

“The immigrants from Central America, they’re illegal. So they’re unprotected. A saleable product. Te digo mano, that’s what smart business is. Taking advantage of opportunity. Discard the culls that won’t sell, keep some of the good ones for your own use. Profit, that’s the bottom line! That’s what business is all about.

“The higher the profits, the greater the competition, the greater the risk. The Zetas risk their lives. Ask anyone who’s been in combat, any Salvadoreño guerrilla, any veteran from Vietnam—one who risks his life doesn’t put a high value on other lives. Life is temporary. One lives for the moment. Thrills. Money. Power.

“But at the same time: organization, discipline, training. The Zetas are commandos, commandos with a mission. Recruit X’s job is to ride the transfer route on a motorcycle to report on traffic, army units, cops. Recruit Y’s job is to be with Comandante Fulano of the state police to make sure a shipment goes through. Recruit Z—quién sabe?—to stand armed guard on a safe house crammed with hijacked refugees.

“Business. Very profitable business. Enough money to buy whatever is needed: guns, airplanes, police, nightclubs, politicians. And a funny thing. You arrest a Z-40 or a Z-Whatever and you do the rest of the Zetas a favor.

“Why? Because there’s a horde of Z’s behind him who want to move up. Take his place,” Osorio says. “Just like in legitimate business everybody wants to claw their way to the top.

“You can’t put a business out of business if there’s demand for the product. All you can do is change suppliers. That’s how the Zetas got in; the only way they’ll get out is if somebody bigger comes in. Or if there’s no demand.

“And I tell you the truth. I don’t think that’s going to happen.”

I didn’t tape record this conversation with Gonzalo Osorio, although I did take notes. As he commented himself, most of what he said was common knowledge—common at least to the extent that if one wanted, one could come to the same conclusions without having connections to Zetas or to political officeholders.

The organizational structure that Osorio described was verified by federal and state elaborations after the arrest of Oaxaca Zeta leader Marcos (El Cabrito) Carmona Hernandez in 2011. Only 29 when he was captured, Carmona had worked his way from being a shipment guard and advance scout to becoming the chief of the southern Mexico branch of the Zeta organization.

Besides being responsible for getting shipments of imported cocaine through Oaxaca, he managed the wholesaling of smaller amounts of drugs to Oaxaca retailers and supervised the paid-for protection of nightclubs, bars, stolen car dealers, pirated goods and contraband. He acknowledged (and news organizations reported) that he operated with the support of municipal and state police, who kept him informed of their activities. No investigations of these connections have been reported either by news or law enforcement sources.

As Osorio indicated, the capture or killing of a Zeta leader has had little effect on the overall operations of the organization. It is tightly structured, and the next in line is ready to step up the day a vacancy occurs. That is not to say that within the Zetas conflict does not exist. There is a constant jockeying for advancement: betrayals, subgroups, dissidents, even executions. Zetas risk their lives not only in combat with other drug corporations and with law enforcement but with each other. Nevertheless discipline is tight and nonconformity punished.

A former Oaxaca state policeman, who declined to have his name published, ridiculed the commonly held idea that a Zeta is a snarling, wild-eyed 20-something high on drugs with blood dripping from his fingertips. “He is the guy in a polo shirt next to you in a bar, the fellow checking out laptops in Office Depot, the clean-cut big spender with a beautiful novia at an auto show.”

Zeta recruits, many still in their teens, get a starting salary of US $800 a month—approximately 10,000 pesos—twice that of a policeman and more than a schoolteacher. In a state where federal statistics list nearly 70 percent of the population living in poverty, a teenage Zeta messenger, guard, hit man or scout is financially in the upper echelon of Oaxaca society. Payment to strategically placed citizens—bureaucrats, officeholders, police, bankers—is even higher. Arresting a Z-40 does little to alter business as usual.

The profits are very high.

Robert Joe Stout, of Oaxaca, Mexico, is the author of several nonfiction books, including Why Immigrants Come to America and The Blood of the Serpent: Mexican Lives. He also has published two novels and numerous essays about Mexico.