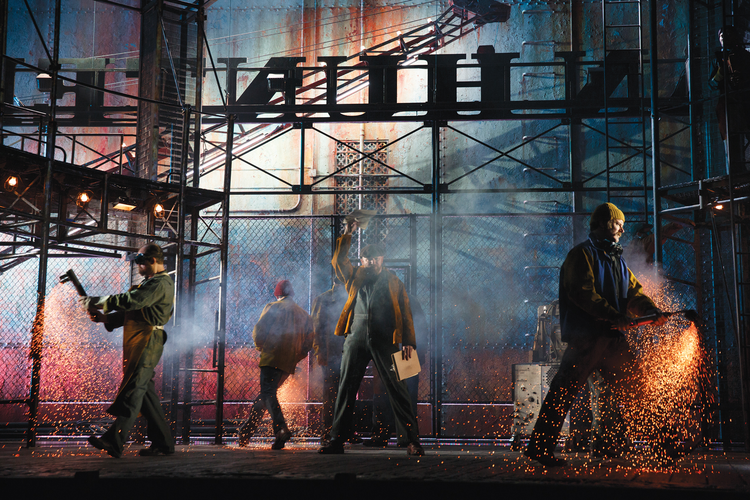 Father Jim O’Brien, an Irish priest in the northern English shipbuilding town of Wallsend, is supposed to preach on the passage about the “salt of the earth” in Matthew’s Gospel, but he has got something else on his mind. Setting the Scripture aside, he directly addresses his flock: working men and their families, who yearn for the return of meaningful paid employment to their all-but-closed-down burgh.

Thus does the title song of Sting’s rollicking, uneven new musical The Last Ship start as a sermon. Father Jim envisions Mary Magdalene finding Christ’s tomb empty, then noticing a “solitary figure in a halo of light” hurrying away from the grave. Over a grinding sea-shanty waltz, with a haunting tune that alternates single repeated notes with leaping arpeggios, she asks him:

Tell me, where are ye going, Lord, and why in such haste?”
“Now, don’t hinder me, woman, I’ve no time to waste
For they’re launching a boat on the morrow at noon
And I have to be there before daybreak
Oh, I canna be missing, the lads’ll expect me
Why else would the good Lord himself resurrect me?

By the time this sermon/song is done—or rather, has segued into an impromptu rally at the local pub—Father Jim has made this apocryphal mission explicit: He will use church building funds to help finance a worker-led reoccupation of the shipyard. There they will construct one final ship, he explains, then sail it around the world themselves. Inquires one worker: “But Father, who’s the ship for? Who’s the client?” Replies Father Jim (played crisply by Fred Applegate): “Humanity. Redemption. Grace.”

That is “The Last Ship” in a nutshell: impish yet earnest, free with its employment of iconic stories and tropes—from the Bible, from classic musical theatre, from a dozen other post-industrial-comeback narratives—and sentimental to a fault. In a paradox that nearly dooms the show, the serviceable, slightly sketchy book by Brian Yorkey and John Logan never makes this dubious, quixotic shipbuilding effort very credible. However, it is undeniably stirring as an organizing idea and inspires many a rousing, full-cast song, led by either the priest or by the town’s other authority figure, the grizzled but unbowed yard foreman Jackie Green (Jimmy Nail, a native Newcastler to his bones and a bracing breath of fresh Northern air on Broadway).

The show makes more sense, and is arguably much more grown-up, with its other storyline, that of Gideon (Michael Esper), a prodigal son returned to bury his father and settle unfinished business with his old girlfriend Meg (Rachel Hunter), but it struggles mightily to make this familiar plot interesting.

What keeps the show afloat, to an extent, are the gorgeous, compulsively listenable songs by Sting, the former Police frontman, who has not only done his musical-theatre homework (there are clear call-outs to Rodgers & Hammerstein, to Kurt Weill, to “Fiddler on the Roof”) but has reached deep into his own craft, and his own Newcastle upbringing, to come up with one of the richest Broadway scores in memory. There are occasional lapses into cheesy mid-tempo pop and a few clumsy lyrics, but these are overshadowed by an astonishingly surefooted series of standard-worthy ballads, expansive anthems and stomping dances. “The Last Ship” has the unmistakeable sound of a fine musician finding his bliss in a new form. We hope Sting sticks with the theater and sees fit to write another show, this time with a book as seaworthy as his music.

The brilliant choreographer for “The Last Ship,” Steven Hoggett, makes dance out of everyday gesture and gait, and vice versa, and he is doing much the same trick in another Broadway show across town, The Curious Incident of the Dog in the Night-Time, an import from London’s National Theatre. Based on Mark Haddon’s compact, mesmerizing novel, “Curious Incident” is not a musical, though it has its own immersive, otherworldly wavelength as it follows the circuitous path of an autistic teenager, Christopher (Alexander Sharp), who is trying to uncover the mystery of a pet’s murder and instead learns uncomfortable truths about his parents.

Whereas Haddon’s first-person prose could powerfully evoke the compartmentalized logic of Christopher’s Aspergers-like mind through indirection and understatement, onstage we stand outside him and watch him do battle with the confusing, even menacing world outside his head; that outside world necessarily has a more literal, multivocal presence onstage than it does on the page.

The solution, pulled off mostly beautifully by playwright Simon Stephens and director Marianne Elliott, is to recast the story as a play-within-a-play conjured between Christopher and his para-educator, Siobhán (Francesca Faridany), and to stage it within a kind of cell that evokes the “Tron”-like workings of Christopher’s mind. An LED grid is projected on three imposing walls around the stage, and the sound design is replete with beeps, blips, static and feedback. But even this too-orderly space has its share of secret compartments, escape hatches and dangerous blind spots.

If the family drama roiling around Christopher occasionally takes on a well-worn shape—bad parenting and infidelity colliding with the needs and limitations of a challenging child-turned-adolescent—the course it takes is unexpected, surprising and occasionally intensely suspenseful, as when Christopher decides to leave his home in sleepy Wiltshire for the chaos of London.

The narrative landscape, in short, may seem familiar, but our usual maps will be no help here; emotional outcroppings are never quite where we expect them, and no matter how attentive we are, we are going to hit a wall. Just when we think we have it figured out, “Curious Incident” sneaks up and knocks us out—a rough analog for Christopher’s journey from misunderstanding to be-careful-what-you-wish-for clarity. This odd, engaging play begins as an exercise in seeing the world through another’s eyes; its destination is a place of radical empathy for all our blinkered perspectives.