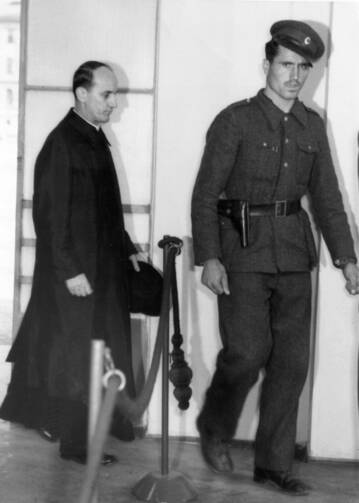 Croatian and Serbian experts met at the Vatican to clarify questions about the life of Blessed Alojzije Stepinac—a national hero for Croats and a highly controversial figure for Serbian Orthodox and some Jewish groups who have accused him of being a Nazi sympathizer.

The commission, which held its first meeting from July 12-13, is made up of representatives of the Serbian Orthodox Church, the Catholic Church in Croatia and the Vatican. It was created at the request of Pope Francis to conduct "a re-reading together" of the cardinal's life before, during and after World War II "to respond to the need to clarify some questions of history," the Vatican press office said in a written communique on July 13.

The work of the mixed commission "will not interfere with the canonization process," still underway, because its work is a "scientific endeavor," studying historical evidence in its proper context, the note said. The process of studying and determining a candidate's cause for sainthood is a matter that strictly pertains to the Holy See, it said.

Blessed Stepinac was beatified as a martyr by St. John Paul II in 1998.

Before World War II, he was noted for helping Jewish refugees from Nazi Germany. Though he welcomed the independent, pro-Nazi Croatian state declared in 1941, he later protested the puppet regime's genocidal policies and atrocities committed against Serbs, Jews and Gypsies.

But when communist partisans came to power in 1945, they accused the cardinal of attacking communism, and he was convicted of collaborating with the Nazis. He died under house arrest in 1960 from an illness he contracted in prison.

Croats see him as a symbol of the church's resistance to communist oppression, but others sharply criticize his early support of Croatia's pro-Nazi government.